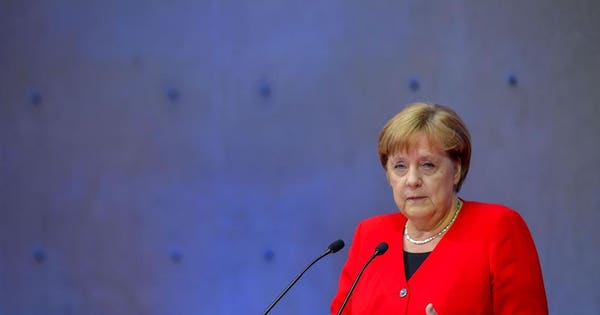 After months of resistance, German Chancellor Angela Merkel said yesterday she is willing to join with France and seven other countries in calling for the European Union to bring carbon emissions down to net zero by 2050.

Merkel said her final decision will have to wait until her ministers can calculate a way to do it without harming the economy. But with a decision due next month on setting the EU’s long-term climate course, some climate activists say this is just further stalling from the German government.

Speaking at the annual Petersberg Climate Dialogue in Berlin, Merkel said the school climate strikes led by Swedish teenage activist Greta Thunberg had influenced her decision. “Compared to earlier years [of the Petersberg Dialogue] something has changed,” she said. “We have children and teenagers who gather every Friday and put pressure on politicians.”

“Of course, this is anything but comfortable,” she acknowledged. “But I want to make it clear that this is understandable. From the perspective of young people, our nature, our society is at risk.”

“I suggest that we have a discussion in the climate cabinet on how we could achieve the target of becoming climate neutral by 2050,” she said, defining climate neutrality as abating any small amount of remaining emissions by storing it underground (through carbon capture and storage) or by planting trees to absorb the carbon that is still emitted.

She noted that CO2 storage is controversial in Germany, and that is why this and other issues need to be discussed in cabinet. The discussion “should not be about if we can achieve it, but about how we can achieve it.” If they can find a “sound answer”, then Germany can join with other EU countries in supporting a net zero 2050 goal.

French President Emmanuel Macron has for months been pushing Merkel to support a European Commission proposal to set a net zero EU target for 2050. But so far Germany has joined with Poland and other Eastern European countries in resisting the efforts.

At a summit of EU leaders in Sibiu, Romania last week, eight EU countries joined together in demanding the Council of 28 EU member states endorse the plan quickly. But Merkel said at the time that she could not yet support the target.

Next month’s European Council summit in Brussels will be the last opportunity to endorse the plan in time for a UN climate summit in New York in September. Macron wants the EU to be able to come to that summit with new more ambitious targets in hand, to motivate other countries to follow suit. But there is little prospect that Merkel’s cabinet discussion on 2050 will be able to issue conclusions before the summit on June 20th.

According to EU sources, the issue was already unlikely to be voted on at the June summit because it will be dominated over the decision on who to appoint as the next European Commission President, along with other EU top jobs. Diplomats don’t want to see the climate plan become part of the horse-trading that usually takes place between countries and political groups over who gets these top jobs. The decision is now likely to take place at the October Council. By then it will be too late to influence the world’s climate targets, say activists.

Some suspect Merkel has no intention of eventually committing to the net zero goal. Ann-Kathrin Marggraf from the NGO German Environmental Aid noted that Merkel has previously made a pledge that Germany would meet a 40% CO2 reduction target by 2020, but that was “unceremoniously buried after the campaign.” They have voted that this promise is also coming during a campaign – ahead of the European Parliament election taking place across the continent next week.

“The environmental community have stopped believing in the Chancellor’s promises. People don’t want to see more promises. They would like to see action”.

Merkel had previously cast aspersions on the student climate protests, suggesting at this year’s Davos summit that they are possibly being supported by Russia or other outside influences intent on causing trouble for Western governments.

Her about-face on the students come as the far-right Alternative for Germany (AfD) party, which is gaining popularity and stealing votes from her center-right Christian Democrats, has started attacking Thunberg and the climate protesters as part of its campaign to win votes in next week’s European Parliament election.

The party has over the past weeks embraced a position of climate change denial and attacked Thunberg as “mentally challenged” and a fraud. One AfD politician even said she is responsible for the far-right terrorist attack in Christchurch, New Zealand – because the shooter cited concerns about climate change in his manifesto.

AfD’s facebook page called Thunberg the leader of a “CO2Kult” and coined the term “klimagehirnwäshe” (climate brainwashing) to describe her movement.

Merkel’s last-minute conversion to the net zero by 2050 cause may be an attempt to win over AfD voters who are turned off by the climate change denial message. Whether this strategy will work will be determined when German voters go to the polls on May 26th.