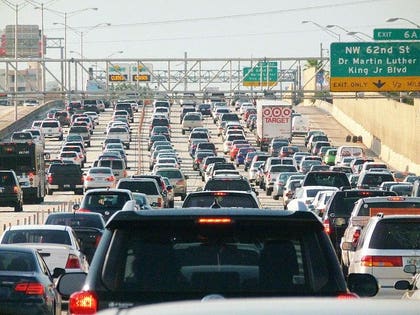 President Trump’s deregulatory agenda, which has rolled back safeguards protecting air and water, harms public health and threatens our climate’s ability to sustain human civilization. But there may actually be a good reason to get rid of one regulation focused on improving vehicle gas mileage.

As the scope of the decarbonization challenge comes into view, the United States urgently needs to take stronger action on climate change. But one law no longer up to the task is a key provision of the Energy Policy and Conservation Act (EPCA) that sets federal fuel economy standards.

Not only is the law insufficient, but Trump has contorted it into an illegitimate way to attack states seeking to reduce greenhouse gases (GHGs) and air pollution. The Clean Air Act (CAA) offers a far stronger alternative that protects Americans from air pollution and enshrines states’ rights to protect the health and well-being of their citizens.

How the first U.S. fuel economy standard was driven into a ditch

EPCA was borne in the mid-1970s by Jimmy Carter’s search for energy efficiency in the wake of an Arab oil embargo that drove domestic gasoline prices through the roof. The law established the first federal fuel economy standards for vehicles, designed to reduce dependence on oil imports.

But EPCA soon showed its flaws. In 1985, with gas prices low, Congress froze fuel economy standards, which then stagnated for decades. EPCA provided no rigorous path forward in improving fuel efficiency until 2007, when the U.S. once again faced spiking gasoline prices, and Congress was compelled to address the failure of EPCA by amending it and setting more stringent fuel economy standards.

Now the Trump administration is using this flawed law to pursue its assault on clean air and policies to limit GHGs. As part of its proposal to roll back the historic Obama GHG standards that would have cut carbon pollution by 50% and doubled fuel economy standards to 54.5 MPG by 2025, the administration is cynically using EPCA by wrongly claiming it precludes states from curbing motor vehicle tailpipe emissions. Yet for over half a century, federal law has recognized states’ authority to protect their people from pollution.

President Donald J. Trump gets in the driver’s seat of an 18-wheeler while meeting with truck drivers and trucking CEOs.

As forward-looking federal policymakers weigh the best way forward on substantive climate action, they should consider one relatively simple solution to reducing GHG emissions from transportation—the fastest-growing source of U.S. climate pollution. The vehicle fuel economy provision of the 44-year-old EPCA must be amended, if not repealed, and the nation must invest its efforts in restricting emissions by preserving and implementing the existing CAA.

Getting rid of the fuel economy standards will help combat climate change in several ways. Under the CAA, all GHG pollutants can be regulated if they endanger public health and the environment, based on a 2007 Supreme Court ruling. Since gasoline and diesel both produce carbon dioxide (CO2), actions to reduce CO2 emissions also result in higher fuel economy standards.

The CAA has also afforded California the power to set its own emission standards for motor vehicles since 1967. California became the nation’s—indeed, the world’s—innovation laboratory for reducing emissions. And later this landmark law was strengthened to grant all states the right to adopt California’s clean vehicle standards – which 13 states and the District of Columbia have done, representing 40% of the U.S. population.

Under the CAA, available clean technologies like electric vehicles that reduce emissions of GHGs and other pollutants can be accounted for in establishing emission standards. EPCA, on the other hand, limits consideration of zero-emission vehicles. Paradoxically, EPCA incentivizes automakers to make larger and heavier vehicles that reduce fuel economy.

The CAA does not limit the time frame for standards. For example, the current set of GHG laws in effect under CAA span model years 2012 through 2025, providing automakers planning stability for long-term investment. But EPCA limits standards to a five-year horizon. In fact, EPCA requires no further fuel economy improvement beyond 2030.

The CAA prohibits the sale of non-compliant vehicles through very large penalties that address harm and deter noncompliance. EPCA’s penalties, meanwhile, are so weak that for years premium car manufacturers have paid the minimal fee rather than invest in improving fuel economy.

The CAA is a proven success. While mileage standards remained stagnant for over half of EPCA’s existence, the CAA has helped reduce auto pollution by 99% from the 1960s, has delivered $2 trillion in economic savings, and annually prevents hundreds of thousands of premature deaths.

It is time for Congress to reconsider EPCA. The Supreme Court found that the U.S. Environmental Protection Agency’s responsibility for protecting public health and welfare under the CAA is “wholly independent” of EPCA’s mandate to promote energy efficiency. But Trump is now subverting EPCA, thus imperiling millions through exposure to air pollution. We no longer need the fuel economy provisions under EPCA, and the U.S. should invest its energy in defending and protecting Americans’ and states’ rights to cleaner, healthier air under the CAA.

So, while gutting regulations is rarely the right way to reduce pollution, in this case, there’s a good reason to park EPCA’s fuel economy provisions and put the pedal to the metal on the CAA.

Margo Oge served as the director of EPA’s Office of Transportation and Air Quality from 1994-2012 and is the author of “Driving the Future: Combating Climate Change with Cleaner, Smarter Cars.”