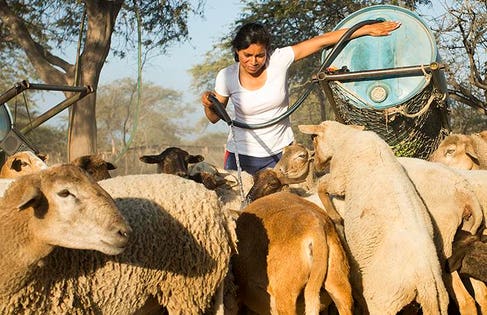 People want to drink clean water even more than they want to breath clean air. This desire will be front and center during this year’s World Water Week in Stockholm August 25th to the 30th.

A farmer gives her livestock clean water in Cucungara, Peru with success of infrastructure projects piloted by IDB and PepsiCo in rural communities often left out of clean water projects. These funds are used for new infrastructure, including pipe systems and treatment plants.

Organized by the Stockholm International Water Institute (SIWI), and supported by the United Nations water programs, the purpose of the annual meeting is to bring the world’s attention to water-related challenges occurring in almost every part if the world. Water is so critical that its problems affect, and are affected by, all others – economy, poverty, population, waterborne diseases, famine, migration and violence.

Current water use, population growth and the effects of climate change have caused two-thirds of the global population – over 4 billion people – to live under conditions of severe water scarcity at least one month of the year. Some of this scarcity has led to violence and conflict, especially in Africa, Southern Asia and the Middle East.

The Syrian conflict was triggered by a years-long drought.

Various entities across the world, both government and non-government, are trying to help, and many of them will show up in Stockholm on August 25th.

In the wake of the horrible state-inflicted water crisis in Flint, Michigan and continued attempts to repeal many Obama-era EPA regulations on air and water, corporations have decided to increase their role in supporting environmental efforts to assure safe drinking water.

One of the most successful non-governmental programs in water is led by PepsiCo. PepsiCo has committed to bringing safe drinking water to 25 million people by 2025, and they should easily meet this goal as they have already reached 22 million people since they began in 2006.

Along with partnering with non-profits like the Safe Water Network, Water.org, China Women’s Development Foundation and the 2030 Water Resources Group of the World Bank, yesterday PepsiCo announced a new additional partnership with the Inter-American Development Bank. IDB is the largest source of development financing in Latin America, especially in rural areas of Mexico, Peru, Colombia and Honduras.

With grants to IDB in 2011 and 2016 totaling $7 million, the philanthropic arm of PepsiCo catalyzed $547 million in additional funding from other entities to support infrastructure investments and upgrades in these communities.

This is not a trivial thing. Nearly 230 million people in Latin America lack access to safe and clean drinking water. And water scarcity is increasing.

“One of the main areas of our partnership with The PepsiCo Foundation through the AquaFund focuses on bringing water and sanitation to rural communities in remote and dispersed areas, usually more difficult to reach,” said Sergio I. Campos G., IDB Water and Sanitation Division Chief. Rural and displaced Latin America communities receive less support for clean water projects than more densely populated areas.

“Access to safe water and improved sanitation services has a positive impact on the health and overall wellbeing of these communities, unlocking their social and economic potential.”

To address this problem, PepsiCo made the first and only private sector investment in IDB’s Aquafund. These investments provided over 765,000 people access to clean water in their communities primarily through the installation of water pumps and pipes.

These programs are providing more than 485 households in 11 communities in Mexico and more than 3,700 students at 10 local schools in Colombia better access to drinking water and sanitation services. The successful pilot programs attracted additional support from international public sector partners, that provided funding to build new infrastructure, including pipe systems and treatments plants.

“At PepsiCo, we believe that access to safe water is a fundamental right – no matter where you live, no one should be left behind,” said Roberta Barbieri, Vice President, Global Sustainability at PepsiCo. “We’re working to make this right a reality by advancing community-based, self-sustaining water conservation and distribution programs in high-need areas across the globe…public-private partnerships are one of the most effective ways to tackle the growing water crisis and provide critical support to communities in need.”

To do this, PepsiCo is also working with WaterAid and The Nature Conservancy. With a $4.2 million investment, PepsiCo and WaterAid brought clean water to more than 200,000 people living in communities in southern India facing extreme water shortages, specifically in Palakkad (Kerala), Nelamangala (Karnakata), and Sri City (Andhra Pradesh), by adding new wells, harvesting rainwater in schools and building piped water supply systems.

By 2050, global demand for water will increase by as much as 50%, mostly in developing countries in Asia and Africa. At the same time, food production will need to increase by 70% to feed a growing and more prosperous population that will top 10 billion.

But almost 300,000 children under the age of five die every year from diarrheal diseases caused by dirty water. That’s almost 800 children a day, or one child every two minutes.

This should not be acceptable to us. More NGOs and companies like PepsiCo need to step up and many have. Pure Water for the World,  Water for Good, Blood:Water, Generosity.org, Water.org, WATERisLIFE and even faith-based organizations like Hope of Life International, are all dedicated to bringing clean water to vulnerable children and families around the world.

Other companies, like Nestlé, are moving forward on other issues like reducing virgin plastic used in drinking water bottles. Americans use about 50 billion plastic water bottles every year along with 150 billion plastic straws. Making these bottles requires over 17 million barrels of oil annually, enough to fuel 1.3 million cars for a year. Procter & Gamble has developed a Water Treatment Plant In A Pouch.

While it is strange to think of large companies taking on many of the roles we consider the job of governments, like protecting the environment and providing people with basic needs like clean water, the more companies that do, the better the world will be.