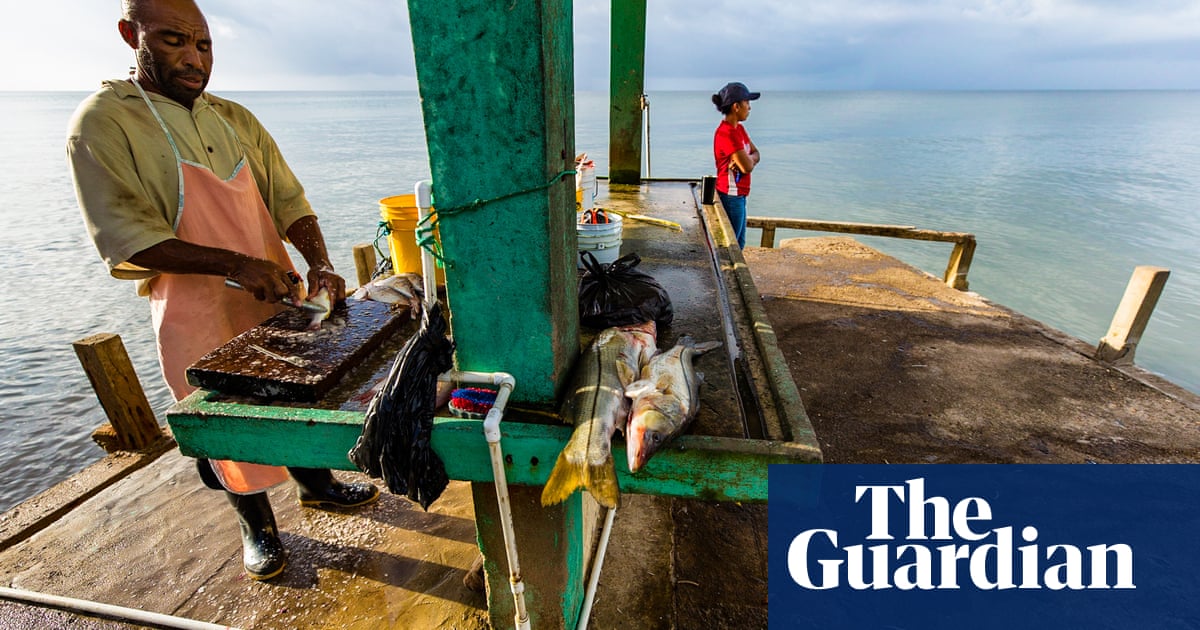 Across the turquoise water by the mangrove, forest ranger Allan Halliday spots a fishing skiff. “We’re going over to say hello,” he says, before abruptly changing the boat’s direction. But his real task is to check the couple on board have the licence to fish in this part of the Port Honduras Marine Reserve, one of nine designated zones in Belize.

“We aren’t complaining but others do,” says Alonzo Reymundo, of the rules that now restrict Belize’s 3,000 commercial fishers to two geographic areas each. He and his wife Anselma have been fishing off southern Toledo for 30 years and their boat is laden with 50 or so pounds of shrimp – more than enough, he says, flashing his licence. Today’s catch will be sold as bait and fetch around 330BZ$ (£135), he says.

But not all encounters are as friendly for the rangers from the Toledo Institute for Development and Environment (Tide), whose job includes enforcing the managed access (MA) programme that since 2016 has given traditional fishers the rights to secured grounds if they obtain licences and report their catch. Illegal fishing has declined, says Halliday, but at night there are illicit incursions from Guatemala and high-speed chases around the reserve’s 500-square miles of pristine sea – a vast space to monitor for just four rangers alternating shifts at their station on Abalone Caye.

Covering all of Belize’s waters, the MA scheme is unique, says fisheries administrator Beverly Wade. “Belize is the only country in the world that has successfully divided all its territorial waters, including functional fishing waters. We direct all fishermen into two of nine areas to build an architecture from the ground up, where a constituent takes ownership of resources because their livelihood depends on it.”

The programme is just part of a groundbreaking approach to ocean protection that has won the tiny country in Central America a reputation as a world leader.

Most recently, in April, Belize expanded the replenishment or “no-take” zones in its marine protected areas from 4.5% to 11.6%, almost tripling zones where fishing is banned, to rebuild fish populations and protect marine habitats. “Nowadays it’s sexy to say ‘this is a no-take area’ somewhere miles out at sea,” says Wade, at her office in Belize City, “but our no-take zone of 16% is a giant achievement for a tiny country like Belize, because all our protected areas are right where people are interacting on a daily basis. That is the hardest thing to achieve.”

While in other Caribbean countries like Jamaica and the Bahamas, overfishing has depleted stocks of lobster and conch, such steps are helping ensure this does not happen in Belize, she says. MA has had faster results than anticipated, with an estimated 60% fall in illegal fishing, benefiting the two primary seafood exports. “The fact that our lobster and conch have remained stable is a direct indicator of the success of the combination of protected areas and managed access,” says Wade.

Other countries could learn from how Belize persuaded its fishers to give up open access to its waters, says Nicanor Requena, who spent almost a decade visiting remote fishing communities with the US-based Environmental Defence Fund (EDF). “At first they didn’t want to know, but we gained their trust by listening to them, and fishers’ traditional knowledge played a huge part in shaping the programme,” he says.

That message has even been echoed in a weekly radio drama about a fictional fishing village called Punta Fuego, with storylines about illegal fishing and characters tempted to make a quick Belizean dollar, with a phone-in to discuss the risks.

But it was two pilot programmes in the Port Honduras and Glover’s Reef reserves that proved to fishers the rights system would secure their livelihoods and win ecological payback: the recovery and preservation of Belize’s outstanding barrier reef – the largest in the northern hemisphere – on which nearly 200,000 people rely because of tourism and fishing. Other countries, including Australia and the Philippines, have been taking note and looking to emulate tiny Belize.

Bordered by Mexico, Guatemala and the Caribbean sea, Belize is home to a 300km stretch of the Mesoamerican barrier reef, whose stunning array of fish includes whale sharks, angelfish and parrotfish, and dozens of species of coral. In what was hailed as a hugely significant point for marine conservation worldwide, the reef was removed from Unesco’s World Heritage danger list in June 2018, after 10 years. That followed the introduction of regulations to protect mangroves and, crucially, a vote by Belize’s government for an indefinite moratorium on all new oil exploration in its waters, after thousands of citizens joined with environmental groups to push for a referendum on the issue. In its 2018 report card on the health of its reef Belize scored 2.8 – an improvement on 2.3 in 2006, though some way off the top score of five.

The gains are impressive but also fragile, says Nicole Auil Gomez, of the Wildlife Conservation Trust, whose scientific research has played a leading role in conservation efforts. “Our actions have been moving faster than the legislation. Now we need laws to buttress this action. Everyone is waiting for the sustainable fisheries bill, which will close loopholes, for example, by making enforcement easier.”

Wade agrees that stiffer penalties in the long-awaited implementation of the bill would help. “Enforcement is our Achilles heel because illegal fishing is so hard to police. We are a small country and simply don’t have the resources. We were confiscating boats but noticed the penalties weren’t as effective as they should be.”

At the national fishing cooperative in Belize City, today’s catch of spiny lobster are being processed as chairman Elmer Rodriguez listens to some fishermen complain that they don’t have licenses because the machine that prints them has broken down. But all agree the key problem with MA is enforcement, especially of foreign fishers who still use gill nets that damage fish. There is not enough patrolling or monitoring, says Rodriguez. “Why should they follow the rules when others just break them?”

In Toledo, Tide’s executive director Celia Mahung says: “I strongly believe the government needs to budget for enforcement. The cost of fuel is so high and NGOs don’t get tax reduction to buy fuel, although they are doing the government’s work.”

Talking to environmentalists in Belize, there is a clear sense of pride in their success, along with fishers, scientists, the government and others, but also pressure to keep up sustainable initiatives. A bigger commitment is needed from the tourist industry, which accounts for almost 40% of GDP, they say.

One species that is still suffering the effects of overfishing is the Nassau grouper fish whose declining numbers are like “watching extinction in action”, says Auil Gomez.

Compounding the challenges is the climate crisis. Emerging threats include Belize’s white sand beaches being swamped by sargassum ocean seaweed and the arrival of the mysterious stony coral disease, which is believed to be linked to warming ocean waters.

“The weather is more unpredictable, the seas are rougher and fishers have to go farther out. We have seen a lot of coastal erosion,” says Mahung, adding that the shrinking numbers and size of fish are forcing communities to look for new sources of income.

Before heading back to the mainland, the Tide rangers stop for lunch in Punta Negra, where village chairperson Paula Jacobs Williams serves red snapper and rice in the building that used to be the school. She co-runs this restaurant with three other women, as part of a project to diversify income in fishing communities. A few years ago 250 people lived here; now there are just 35.

“About 10 years ago they told us we should move because the sea was going to wash us away and every year it’s worse. Now the water is lapping at the steps of my house,” she says. “But I am not going anywhere else. The women of Punta Negra have a lot of talents.”

Despite the challenges, says Requena of the EDF, Belize’s natural wonders continue to offer up surprises. In 2012–2013 scientists discovered a largely unknown area of the reef with unusually rich and varied wildlife and virtually intact coral. They are still working to uncover how this area, which known as the Corona reef, has survived in its unspoiled state in the hope of learning how to increase resilience elsewhere.

“Belize is a little corner of the northern hemisphere where people and nature really are working together,” says Requena. “This is the vision for the future.”

There is one final detour on the way back to the mainland, as the rangers head into an area that’s a known habitat for manatees. The marine reserve was established in 2000 to protect local populations of the gentle sea giants who rely on the freshwater. There is a swirl of mud beneath the sea and then five whiskered manatees resurface to breathe. “Not long ago the manatees in this area were disappearing because fishers from Guatemala used to poach them,” says Halliday. “But they are back. We turned it around.”