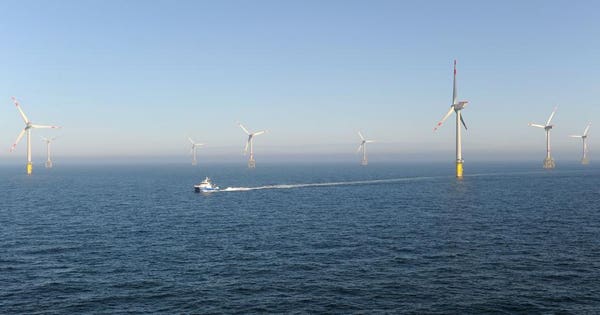 Green jobs carry a lot of political capital these days. Be it the Green New Deal in the U.S. or the Green Industrial Revolution that the U.K.’s opposition Labour Party likes to champion. In days gone by, green jobs seemed somewhat notional and the impact with voters was watered down. There are now 11 million people working in renewable energy.

The waters around the U.K. and extensive experience in offshore engineering courtesy of the North Sea oil and gas sector have given the country a headstart. Offshore wind is also part of the Contracts for Difference scheme whereby the government guarantees a price per MWh, making up the difference between that strike price and the wholesale electricity rate. Should the wholesale price that a project can get on the open market exceed the strike price, it pays back the difference. Auctions have seen that strike price fall beyond all expectations.

Falling behind expectations is the rate that the offshore wind sector is creating jobs. To tackle the problem, the Offshore Wind Industry Council launched a 10-year, $125 million fund support British businesses who want to win contracts.

The Offshore Wind Growth Partnership (OWGP) will look to help British business win work at hoe and abroad. “Support will include a range of services such as expert advice on manufacturing and commercialization as well as funding for innovation,” a statement to mark the launch says. Its first project will focus on the foundations used for the fixed turbines. This is the precise area of controversy surrounding the 450MW Neart na Gaoithe (NnG) project off the coast of Scotland.

While steel fabrication yards, such as BiFab in Fife, which had at times looked like a shoe-in for this work, have been bailed out by the Scottish government, the developer EDF is being pragmatic. It will look for the best value, as no doubt is required to do as party of its fiduciary duty to its shareholders.

In a freedom of information request released this week, the minutes of a meeting between senior EDF officials and Derek Mackay, Scotland’s Cabinet Secretary for Finance, Economy and Fair Work, were released.

The document, based on a meeting on 19 December 2018, states: “Cab Sec emphasized the importance of the project supporting the Scottish supply chain wherever possible, acknowledging that they need to be competitive. Something that MH said that EDF were keen to do,” MH being one of Matthieu Hue or Matthias Haag, the CEO and NnG project director at EDF Renewables respectively. EDF may well be keen, but that’s some distance apart from the expectation that many have about the number of jobs a $2.5 billion investment like NnG should create.

“The work packages associated with the project continue to progress but no formal announcement will be made on the successful Tier 1 contractors until FID in September,” the notes from the meeting also state. In the meantime, there is widespread speculation that a major steel fabrication contract for the project will be awarded to an Indonesian firm with the finished article then shipped halfway around the globe on completion. That is a stern reminder of the vagaries of free-market economics and their disregard for carbon emissions.

The unions are furious.

“There are no two ways about it, to date the majority of the potential benefits from the boom in offshore wind, and renewables in general, have passed the U.K. workforce and economy by. Look no further than the yards lying idle in Fife as contracts go offshore to Spain, Indonesia and the Middle East.”

EU-wide rules prevent countries from stacking the odds against their competing European neighbors with generous handouts and protective tenders. In France, local solar manufacturers were given preferential treatment by introducing a limit on the CO2 intensity of any project looking for a state-backed contract. The policy was approved by the ever watchful officials in Brussels.

Last week New Jersey awarded the contract for a 1.1GW offshore wind project to Denmark’s Orsted. The volume of work that stays in the U.S. could well depend on the small print in that contract.