Why Global Citizens Should Care
Global Citizen campaigns on the UN Global Goals, including Goal 3 for good health and wellbeing, which calls for safe, accessible, and affordable healthcare for all people. Join the movement by taking action here to support the fight against tuberculosis, HIV/AIDS, and malaria.

When it comes to health education and facilities, South Africa is one of the better off countries in Africa. Public hospitals provide free basic healthcare, including life-saving medicine for diseases like tuberculosis (TB) and HIV/AIDS.

Yet, for all the advances it has made in addressing some of its most critical health challenges, South Africa still has one of the highest numbers of TB cases globally. The World Health Organisation (WHO) estimated that the country had 332,000 cases of active TB in 2017.

Meanwhile HIV and AIDS continue to be one of the country’s greatest health challenge, with 7.2 million South Africans living with HIV in 2017, according to UK-based HIV/AIDS charity Avert. In the same year, there were 270,000 new infections.

Cape Town-born photographer Damien Schumann is one of many artists who have decided to put their work to use in raising awareness of global issues, specifically in Schumann’s case, global health.

He has been creating and exhibiting work for well over a decade to help drive social transformation, a mission that has taken him from a “shack” in Cape Town, to the border of the United States and Mexico.

His work has been lauded for being raw, for depicting often crual realities with compassion and dignity. One project, for example, an impressive body of work called The Shack, took his audience directly inside a replica of a 3x3m home — in order to be better able to communicate what it’s like living in these conditions with an airborne disease like TB present. 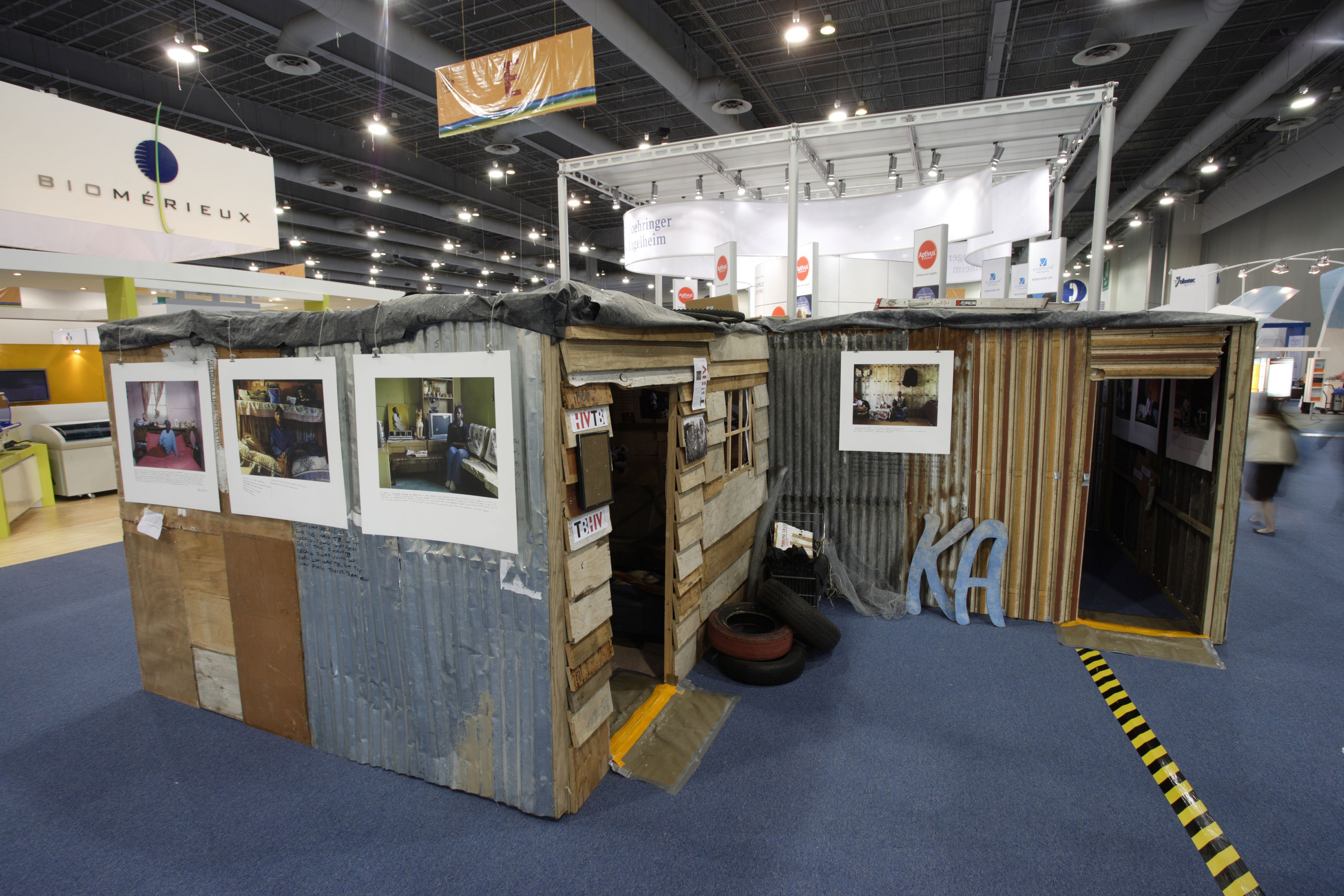 The Shack has been exhibited around the world. Photograph by Damien Schumann.

The work was exhibited in Cape Town, Paris, and Amsterdam in 2006; the Dutch and Australian parliaments in 2007 and 2008; the International AIDS Society conference in Sydney in 2007; and the World AIDS Conference in Mexico in 2008.

Working with anti-poverty organisation Results Australia, Schumann’s work helped encourage the Australian government to write off $52 million of Indonesia’s commercial debt on the condition that the country invest half of the money in TB, malaria, and AIDS programmes.

Meanwhile, the Dutch government increased its HIV spending in Africa over three years from $44.6 million to almost $70 million.

Global Citizen talked to Schumann to hear more about his photography and how art can help further the mission of the UN’s Global Goals, and end extreme poverty by 2030.

Editor’s Note: This interview has been lightly edited for clarity.

How and when did you become interested in photography?

I was born in Cape Town, and although I travel a lot this is still very much home and the place I always return to. I was one of those kids who always asked too many questions and wasn’t satisfied with “because” being the common answer.

After school, I spent two years travelling through the Middle East and Asia. Over this time I lived with a photographer, Arjen Jongens, in Istanbul who allowed me to accompany him on a few shots. I was intrigued by the access and engagement photography opened for him.

A few months later I saw a good deal on a camera and decided to buy it. It was 2002 and Myanmar was still struggling under a dictatorship, so I slipped across the border and spent the next month trying to evade immigration officials.

An orphanage took me in, and I spent a week learning about their lives, experiencing their generosity, and commitment to what they believe in. It was here where I shot my first rolls of film and had the story published when I returned to Thailand. I was self-trained but decided that I wanted to become a professional documentarian.

I then hitchhiked across Africa — eating, sleeping, and travelling like the average person does in the given country. Upon my return in 2004 I held an exhibition which was rooted in some hard experiences I had during the trip.

The exhibition caught the attention of the director of the Desmond Tutu TB Centre, Prof. Nulda Beyers, who asked me to produce a series focused on tuberculosis. And, with that, my career in social and humanitarian issues took off.

What is the main inspiration behind your photographs? Tell us more about what exactly viewers see when looking at them.

Photography is my way to seek understanding [of] conditions that lie beyond my immediate bubble. It is a powerful medium, and with the correct intention, I believe it can be harnessed in positive ways. With The Shack I was faced with the dilemma of lacking context for the stories I wanted to tell.

I had to show how lifestyle and living conditions affect those living with TB and HIV/AIDS, but until one has experienced the poverty which contributes to these diseases, it’s hard to fully understand. 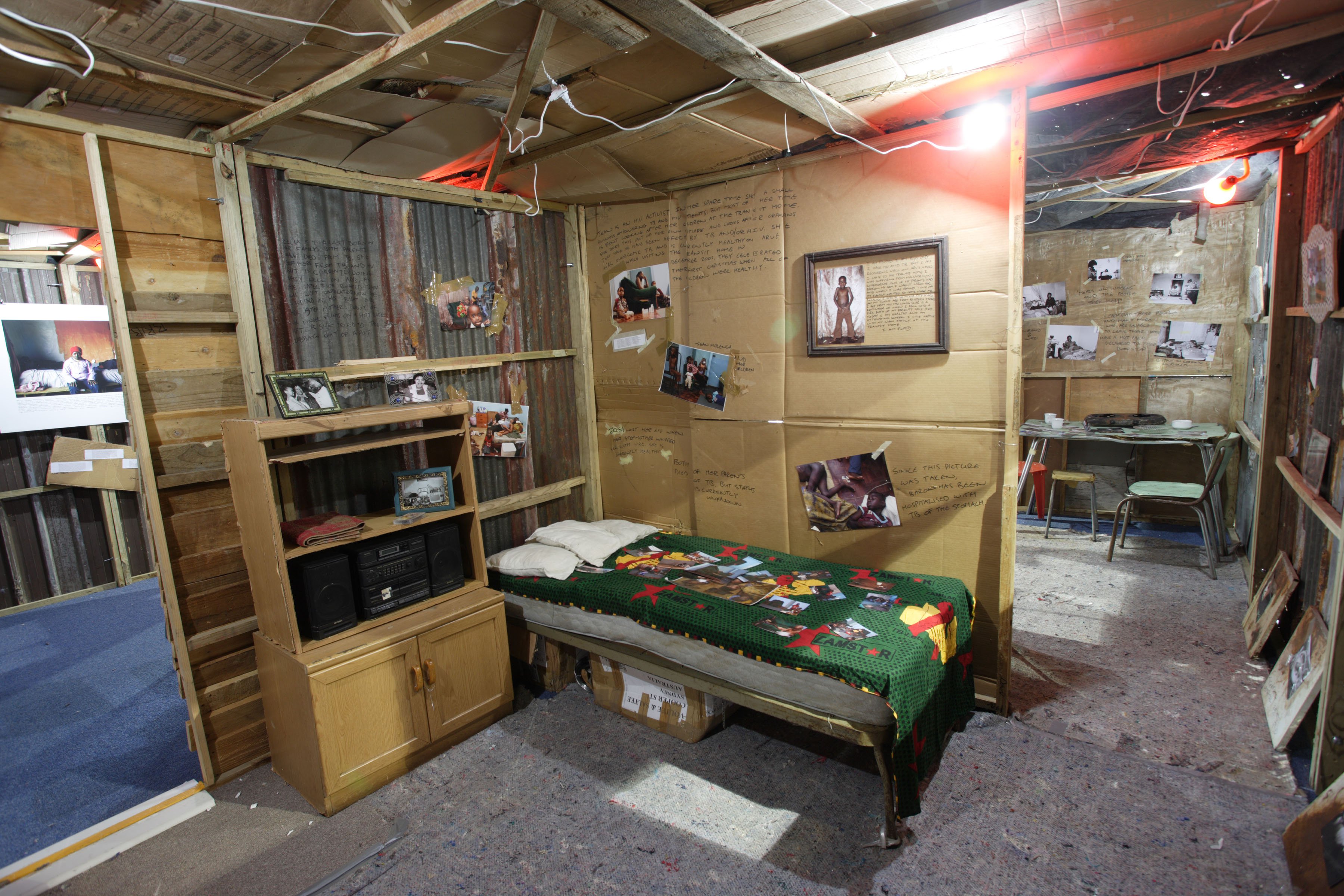 The powerful exhibition explores the effects of TB, HIV and AIDS and poverty. Supplied by Damien Schumann.

I decided that the best thing to do was to create a life-size replica of the conditions people live in and use this as a gallery space to share the stories. In this space, quite literally a “shack”, it was possible to talk about 12 people sleeping in a 3x3m congested room with an airborne disease present.

As one looked at the pictures, you would feel the heat, the stuffiness, how cramped it is, and it became quite clear why things need to change.

What are your comments, feelings, and experiences regarding the current living conditions in South Africa?

The living conditions for the majority of the population are awful. I don’t think we’re going to find a sustainable solution until we can improve our employment rates. It’s complex.

The apartheid framework was designed to make life difficult in low-income areas. Today democratic societies are still living within this framework, but there is no choice for those on the poverty line.

Based on the amount of government houses I’ve seen that have been in tatters only a couple of years after completion (sometimes months), I doubt that handouts are a good long-term plan. With employment will come empowerment and that, I believe, will bring better sustainable living conditions.

Can you tell me more about the overall experience of taking on the task of commenting on such an important subject?

Originally it was only meant to be a one-off exhibition for World TB Day, but its message touched many people and before I knew it, I was travelling around the world.

The logistics of transporting a container full of scrap metal and furniture overseas is ludicrous, and yet, on four continents people volunteered to take on the project without hesitation. Not only that, but the project had to be erected in places that were inconceivably difficult to access. 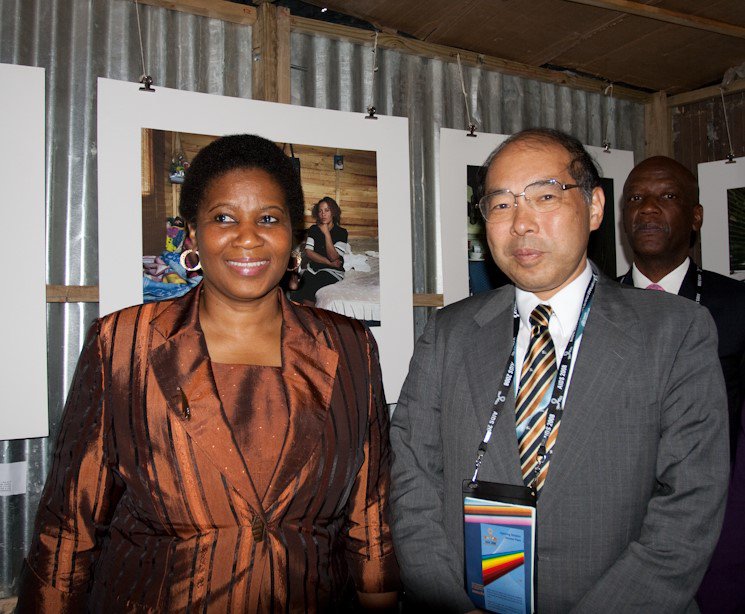 The people I met through the project were some of the most dedicated and compassionate I’ve ever come across.

Can you tell us more about how you worked with the World Health Organisation?

The World Health Organisation (WHO) took The Shack to Mexico for the World AIDS Conference in 2008 to advocate for TB/HIV co-infection treatment.

The conference took place shortly after South Africa’s then minister of health, Manto Tshabalala-Msimang, stated her beliefs about curing HIV with vegetables like garlic and beetroot. The South African government was out to save face and tried to do so by building the most expensive stand at the conference, fully equipped with hologram walls showing the president and health minister.

The quote on their stand read “South Africa — the most comprehensive approach to TB and HIV in the world.”

We were two stands down from them with a life-size shack from South Africa, stating this is the face of TB and HIV.

It caused quite a standoff, but in the end it created this perfect middle ground that won over activists, pharmaceutical companies, politicians, and leading decision makers like [Belgian microbiologist known for his research in Ebola and AIDS] Peter Piot, and Dr. Hiroshi Nakajima [director of the WHO].

In the end, the Deputy President of South Africa Phumzile Mlambo-Ngcuka visited us, to which she exclaimed: “This reminds me of home!”

How did your work prompt the Dutch and Australian governments to invest more in healthcare?

I worked closely with KNCV [a tuberculosis foundation] in the Netherlands, and with [anti-poverty organisation] Results in Australia.

We organised campaigns where we managed to erect The Shack in the Australian and Dutch parliaments. Imagine the faces of the MPs [ministers of parliament] when they arrived at work, and in the foyer of a billion-dollar marble building (as is the case in Canberra) stood a house made of scrap metal.

A strength of The Shack is that it totally isolates one from their environment. In a matter of seconds, viewers are fully immersed in a township and far from the world they had just stepped in from.

It is impossible not to pay attention to the stories that were framed on bedside tables and stuck onto the walls. The lobbyists I was working with had booked appointments with MPs first thing the following morning, and The Shack and its message were fresh on their minds.

Powerful experience coupled with compelling discourse won over a few MPs who spoke of us in Chambers, which led to policy being changed.

In Australia, we actioned the Millennium Development Goal [a predecessor of the UN’s Global Goals], “debt-to-health swap” which saw Australia dropping a US$75 million debt owed by Indonesia, on the condition that half of that would be spent on public health development. 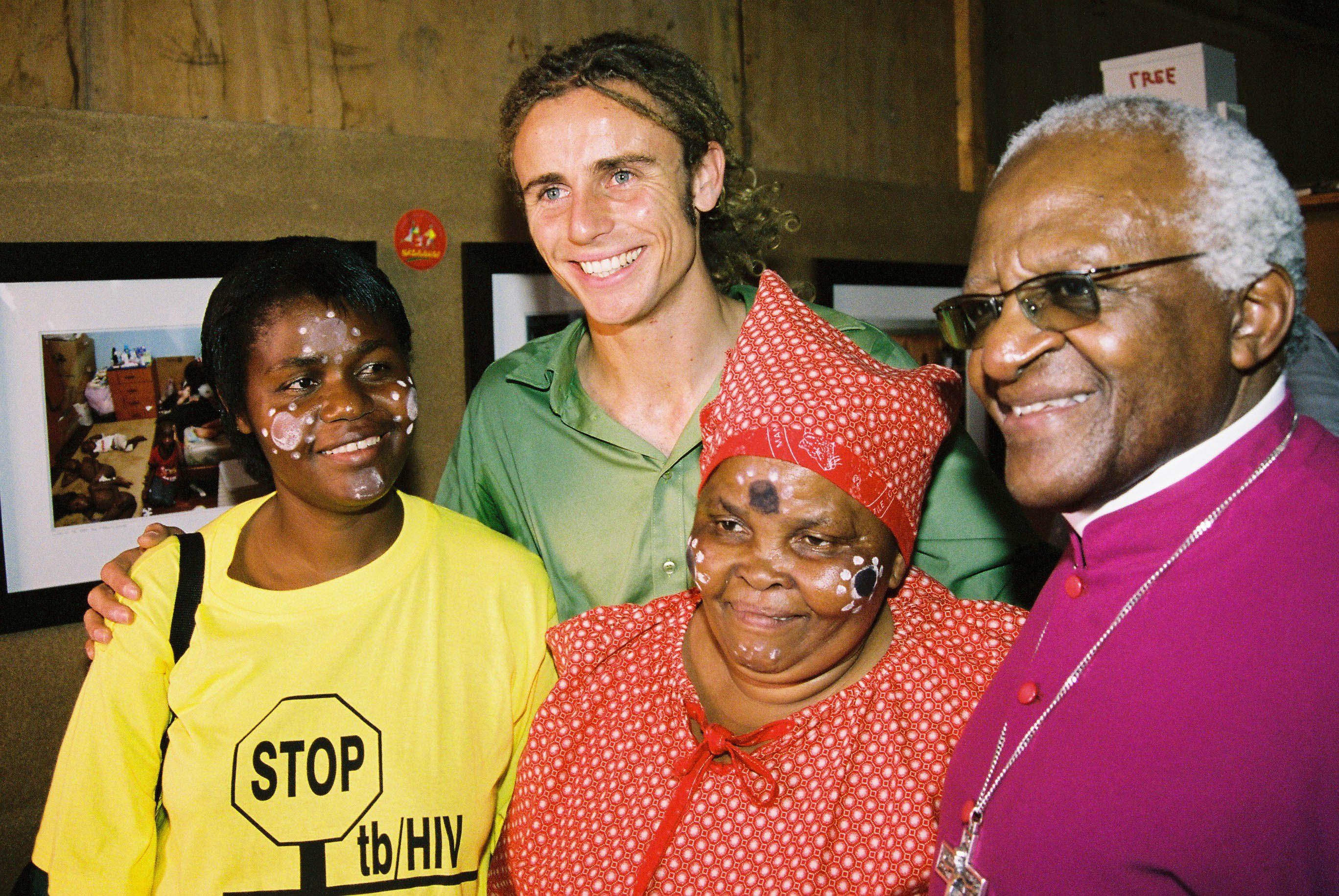 Desmond Tutu, Damien Schumann, Mama Maposela from Nyanga and Jean Molenga from Lusaka, Zambia. The women look after abandoned children from their own homes and out of their own initiative and care. Supplied by Damien Schumann.

And in the Netherlands, we convinced the government to double their HIV spending over three years in developing countries.

How was the project eventually adapted into a research campaign?

After The Shack was shut down in Mexico, Professor Eva Moya from the University of Texas, El Paso, decided to adopt the concept.

Together we built a “Mexican shack” called Nuestra Casa which travelled the length of Mexico and the southern United States for two years. The project ended at the CDC Smithsonian Museum in Atlanta as an awareness and social mobilisation campaign.

It also acted as a research study to gather information about the public’s understanding of TB and HIV.

This research was shaped into a mobilisation campaign that was hosted at the Centennial Museum in El Paso for a year, where each month it hosted a campaign focusing on one of the contributing social factors to TB and HIV in the border region.