Engagement Around the World, Charted

Keeping employees engaged is a concern for companies around the world. We tend to think only about engagement in our own organizations. But new findings from ADP Research Institute, which makes and shares data-based discoveries about all aspects of the world of work, reveal stark differences in engagement between countries, industries, and job types.

Stay informed with emails about everything new we launch in this and other Big Idea projects.

After surveying more than 19,000 workers across the globe, the researchers found that only about 16% of workers overall are fully engaged. (That doesn’t mean the rest are bad employees or actively disengaged. But it does mean that there’s plenty of room for improvement.) However, some countries, policies, and behaviors have moved the needle. And some of the factors that companies focus on in trying to understand engagement — age, gender, where one actually works — aren’t all that determinative. But the researchers did isolate one factor that transcends all categories: whether the worker is part of a team.

A few countries, such as the United Arab Emirates and India, demonstrate high engagement relative to others in the survey. Most hover around the 15% mark, while China and the Netherlands fall behind. 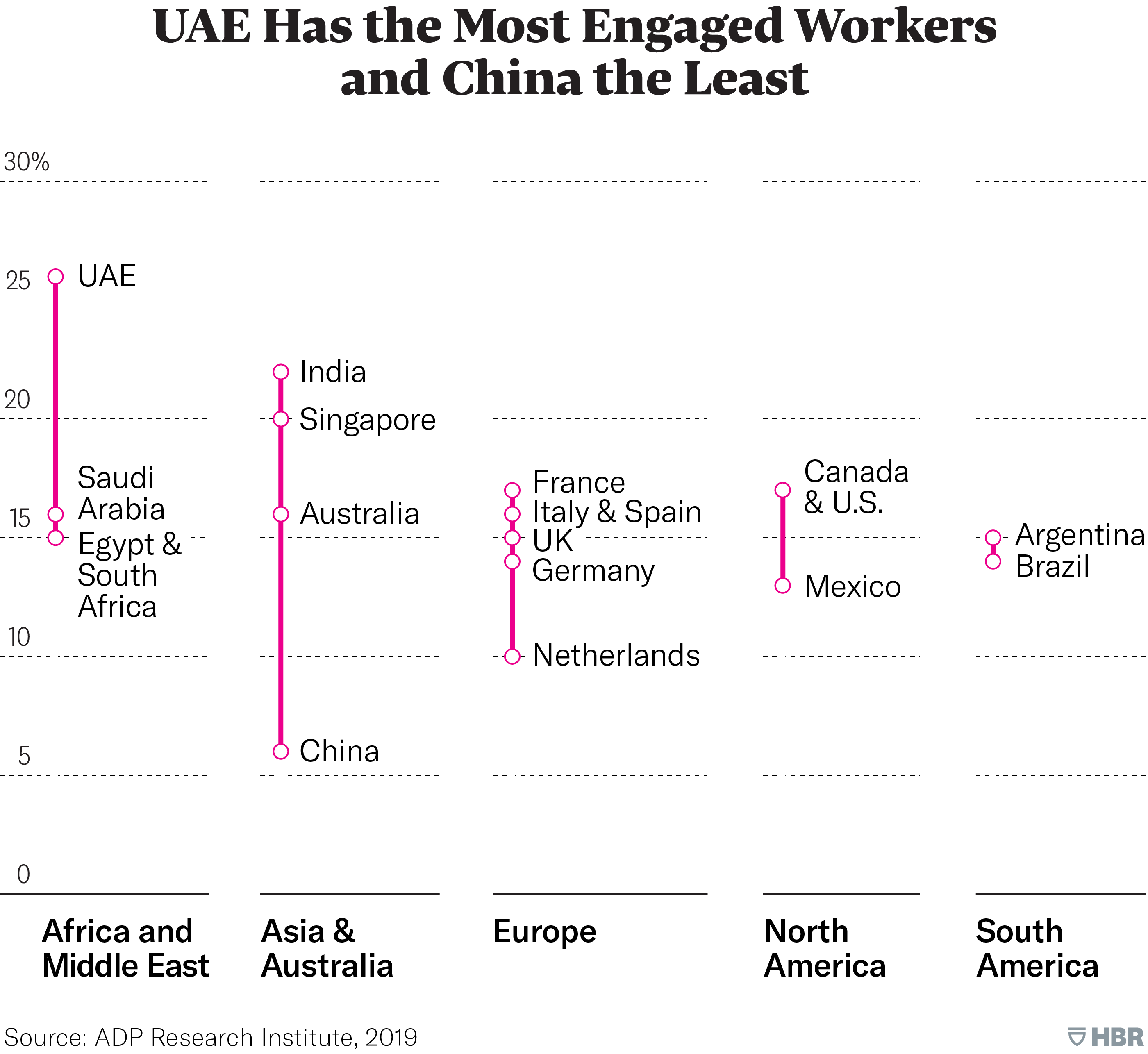 There’s some good news, however, depending on where you live and work: Of the 13 countries surveyed in both 2018 and 2015 (when a similar study was conducted), eight have seen increased engagement.

But except in India and Spain, those improvements have been small — a percentage point or two. And in China the drop in engagement is significant. (The researchers repeated the survey with a different sample to ensure that the findings were stable.) In 2015 China was tied worldwide for the highest share of fully engaged workers — nearly 1 in 5. Three years later that ratio had tumbled to about 1 in 16, the lowest among the countries surveyed. In an economy the size of China’s, pinpointing the exact cause of this drop is hard, and worthy of further study. However, the researchers note that 2016 was China’s slowest growth year since 1990, and its burgeoning middle class is starting to expect more from work than the 9-to-6, six-days-a-week regimen advocated by Jack Ma of Alibaba. These factors, they believe, have something to do with the steep drop in engagement. 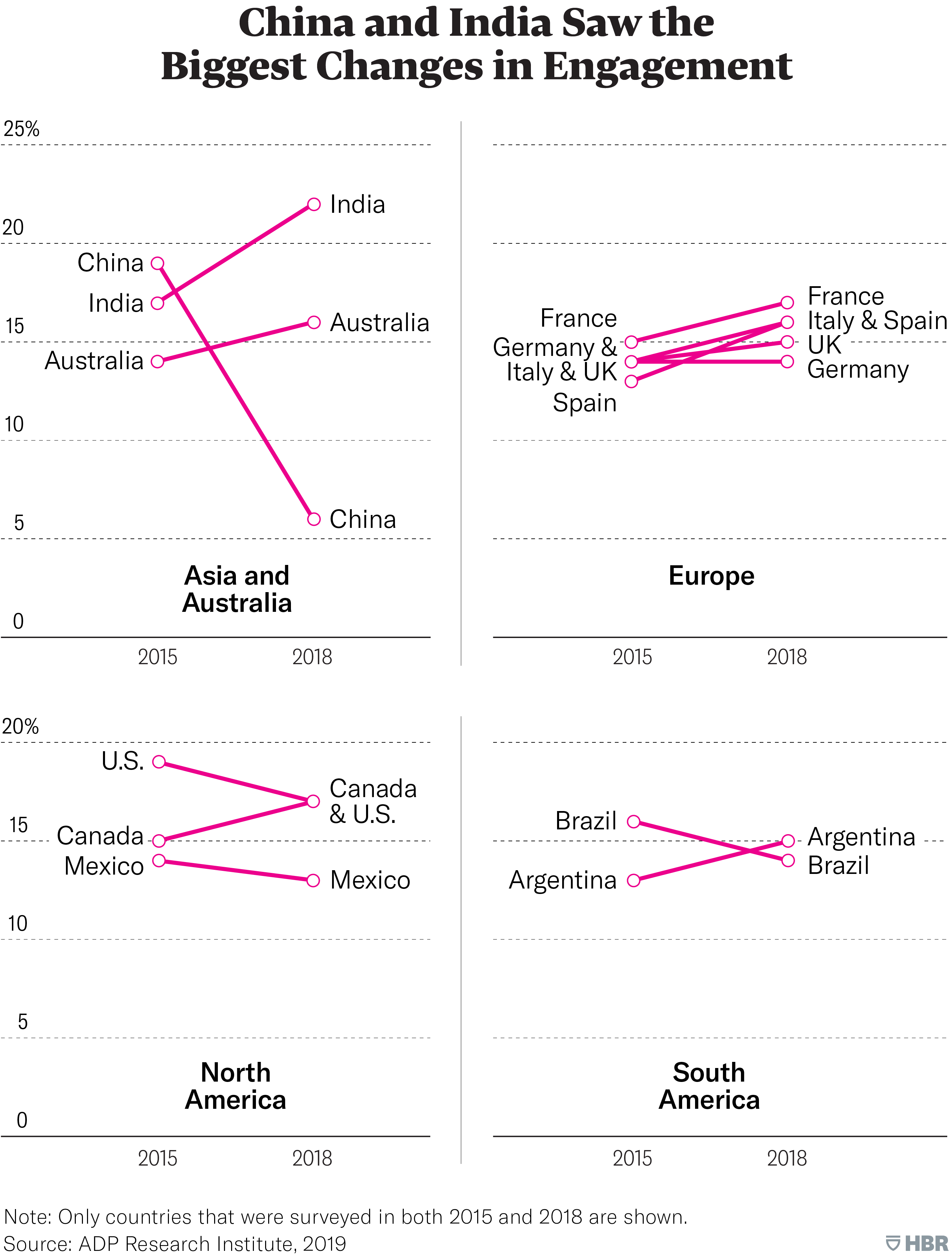 Again, being part of a team makes a huge difference. In the UAE, 29% of workers who are on a team are fully engaged. But for workers there who aren’t on a team, that figure plummets to 7%. In the Netherlands the comparable numbers are 11% and 2%. 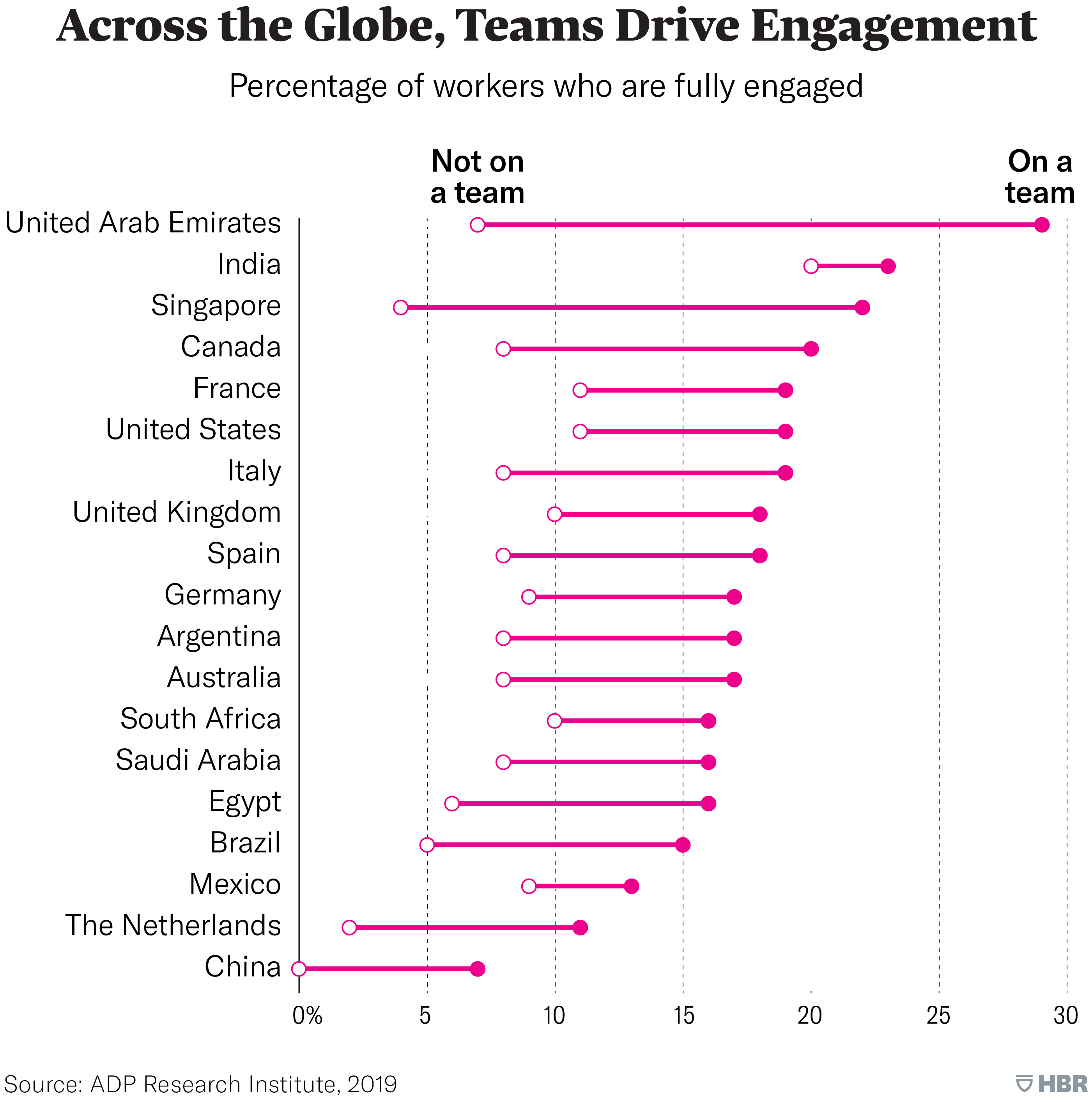 The team effect is also apparent in industries. For example, engagement in transportation drops to nearly zero for those who aren’t on a team, and information workers who are part of a team are more than four times as likely to be fully engaged as those who are not.

What drives higher engagement in particular industries? For construction jobs, researchers hypothesize, it’s the team-oriented nature of the work and the strong sense of purpose and pride in creating permanent, tangible structures. 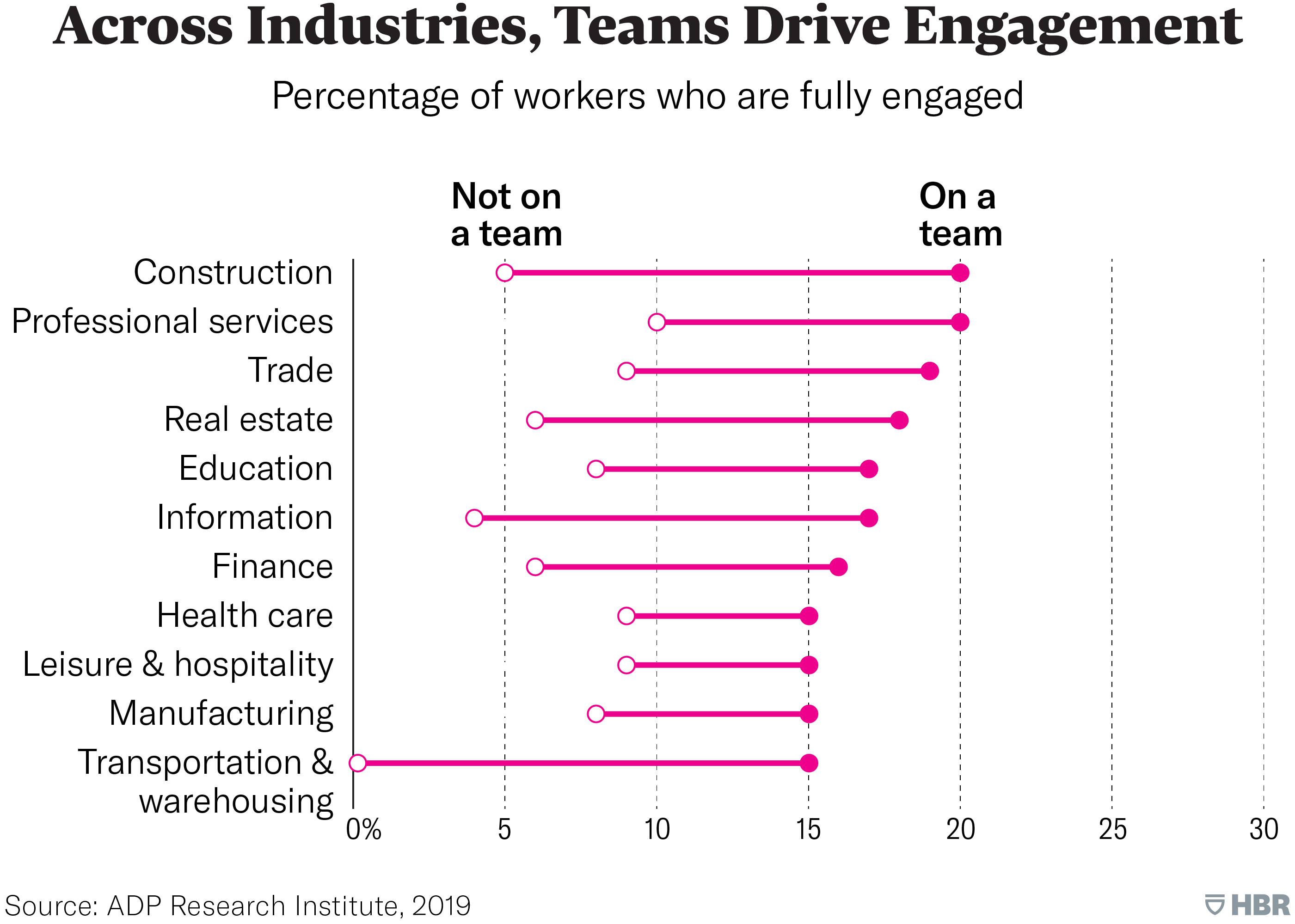 This teamwork data raises an interesting question: Is engagement dependent on a worker’s physical proximity to other team members? The data says no; in fact, largely the opposite is true. People who work remotely at least four out of five days in a typical week are almost twice as engaged as those who do so less than one day a week.

Regular communication with colleagues is important, of course. But as anyone who has worked in an open office can attest, the ability to minimize distractions is crucial to engagement. The critical factor is whether virtual workers feel that they’re part of a team. If they do, they’re twice as engaged as their office-bound colleagues. 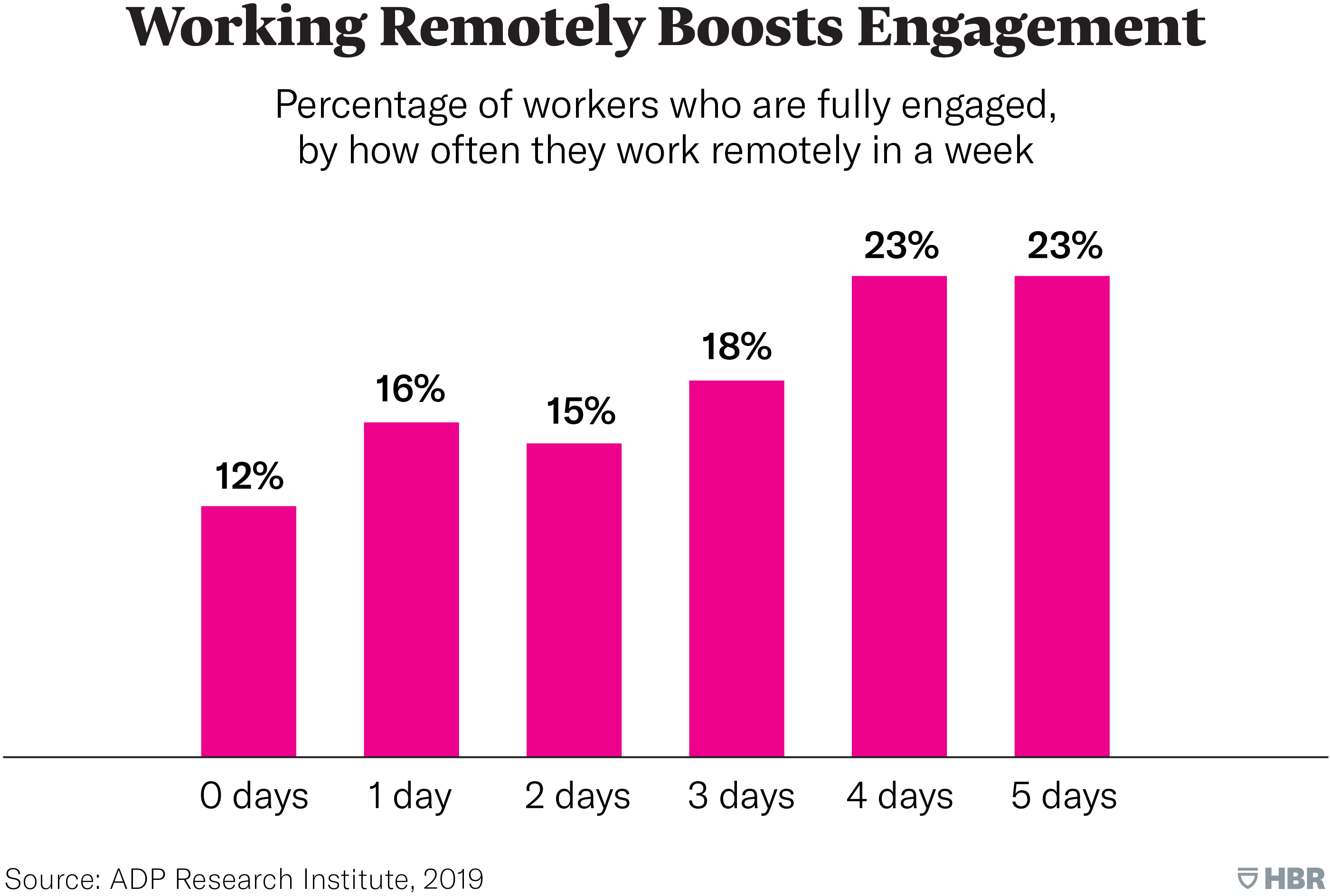 Working from home isn’t the only way employment arrangements deviate from the stereotypical 9-to-5. Today about 45% of workers have just one full-time job, and 15% have just one part-time job. But nearly a quarter of all workers are considered gig-only: They work as contract, or contingent, employees on a full-time (14%) or part-time (10%) basis.

How do these different types of work affect engagement? For part-timers, it’s a wash. Among people working a single full-time job, however, gig workers are 1.4 times as likely to be fully engaged as those in a more traditional role.

Drilling down, the researchers looked at engagement in seven additional scenarios, in which people work two or more jobs. These combinations are less common, each of them affecting 1% to 3% of all workers.

Perhaps surprisingly, people who work two traditional jobs, one full-time and one part-time, have the highest level of engagement.

Regardless of the type of job, the number of jobs a person works seems to drive engagement. One theory is that certain job combinations offer “the best of both worlds” — a full-time role provides stability and benefits, while a second job allows workers to do something they’re passionate about. 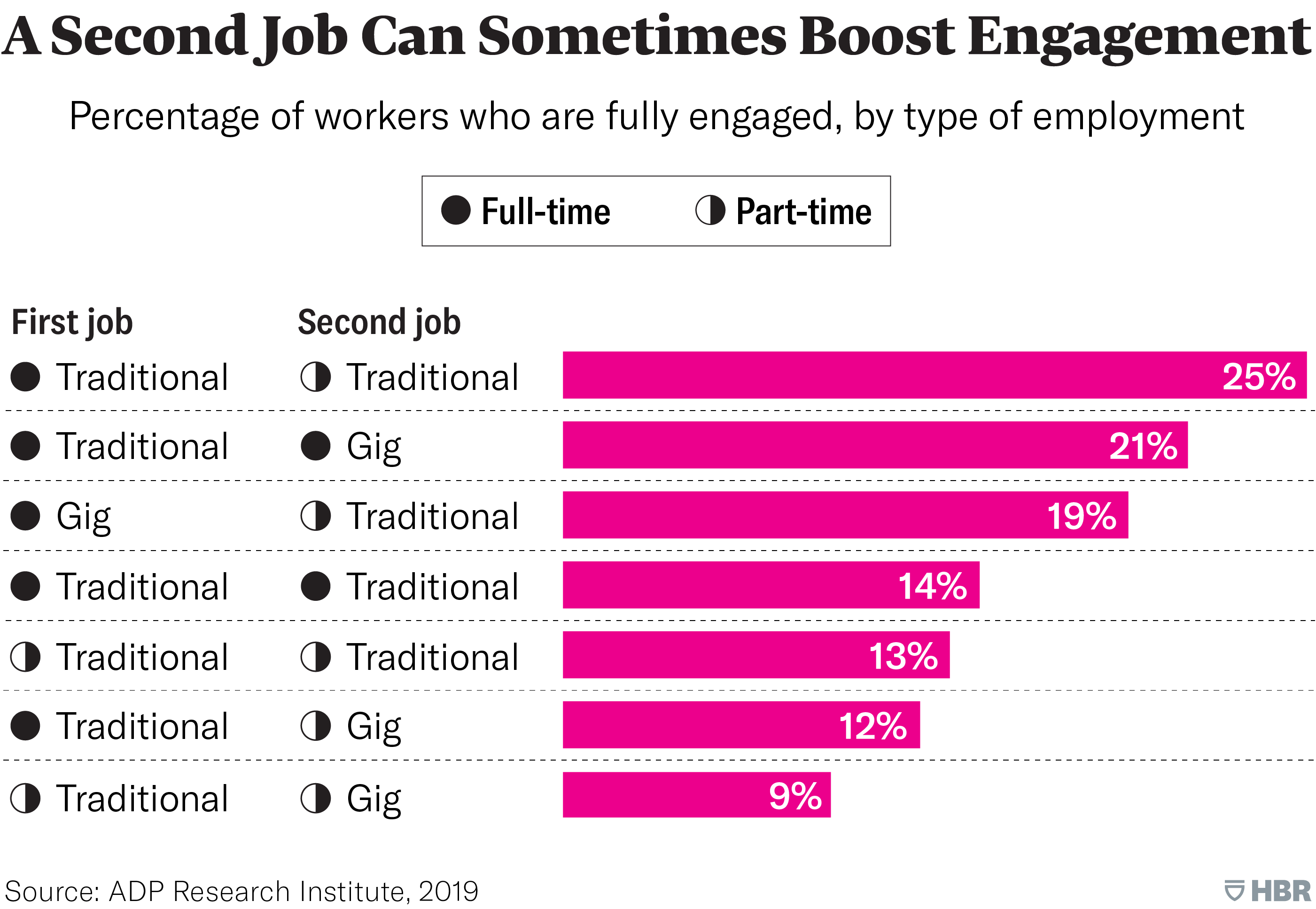 Why should organizations care about all this data? With so many variables outside an employer’s control, it makes sense for companies to focus on factors within their sphere of influence. One is the financial cost in terms of productivity and hiring. A recent study from Cisco showed that when a team member’s level of engagement falls from the top half of the company to the bottom half, their likelihood of actually leaving the company in the following six months increases by 45%.

For a large company, this can add up quickly. Researchers estimate the cost to replace a frontline worker at roughly half that worker’s salary; for knowledge workers, their estimate increases to 2.5 times the salary. Thus a workforce that isn’t fully engaged can translate into millions of dollars wasted on a per-company basis and billions worldwide.

Luckily, leaders can take steps to improve engagement, and they can start at the team level. Even small changes within groups at the office can have a huge impact — not only for your employees but for your company, your industry, and your country as well.The Big Idea

About the author: Matt Perry is the senior graphics editor at Harvard Business Review.