Outside her house in south India, Maria Victor embarks on a decades-old morning ritual that has turned into a key planning tool for impoverished women running small enterprises.

Before her family wakes up, she sweeps her doorstep, splashes water to settle the dust and sits down with a box of rice flour to draw a kolam, a traditional drawing found across south India thought to bring prosperity to homes.

Over the past year, Victor has used her skill of drawing a sequence of dots and deftly making geometric patterns around them to draw maps that are helping women in Tamil Nadu state to identify lucrative locations to set up businesses.

“Just like our beautiful kolams, we also draw beautiful maps,” said Victor, who works as a daily labourer.

“We observe every single detail on the streets near our homes, making notes of the shops, tea stalls, water points, temples and everything,” she said. “Then we draw it on the ground and understand what we have and what we don’t.”

The kolam inspired maps are now a ready reckoner for thousands of women, all budding entrepreneurs trapped in low paying jobs, to decide which business to start or where to set up shop.

Complete with pie charts on exports and imports from the village, the maps have helped more than 5,000 women earn a sustainable income in six districts of Tamil Nadu, according to the Community Foundation for Children and Aging (CFCA), an Indian affiliate of U.S. charity Unbound, which supports the mapping project.

The aim of the maps, made in schoolyards, often over weekends, is to ensure a steady income to provide for the families, a challenge faced by millions of women working in the informal sector.

In India, an estimated 80% of women workers toil in the informal sector, with no scope for better-paid work and little job security or legal protection, labor rights campaigners say.

According to the private Centre for Monitoring Indian Economy (CMIE), 90% of around 10 million jobs lost last year were held by women.

“The first response from many women when you ask them what they do is ‘nothing’,” said Nitya Nangalia of Self-Employed Women’s Association (SEWA) Bharat, an umbrella organization of India’s largest trade union of informal women workers.

“That means they don’t even identify themselves as workers even though they are doing multiple jobs. That is the starting point in a long journey to become entrepreneurs.” 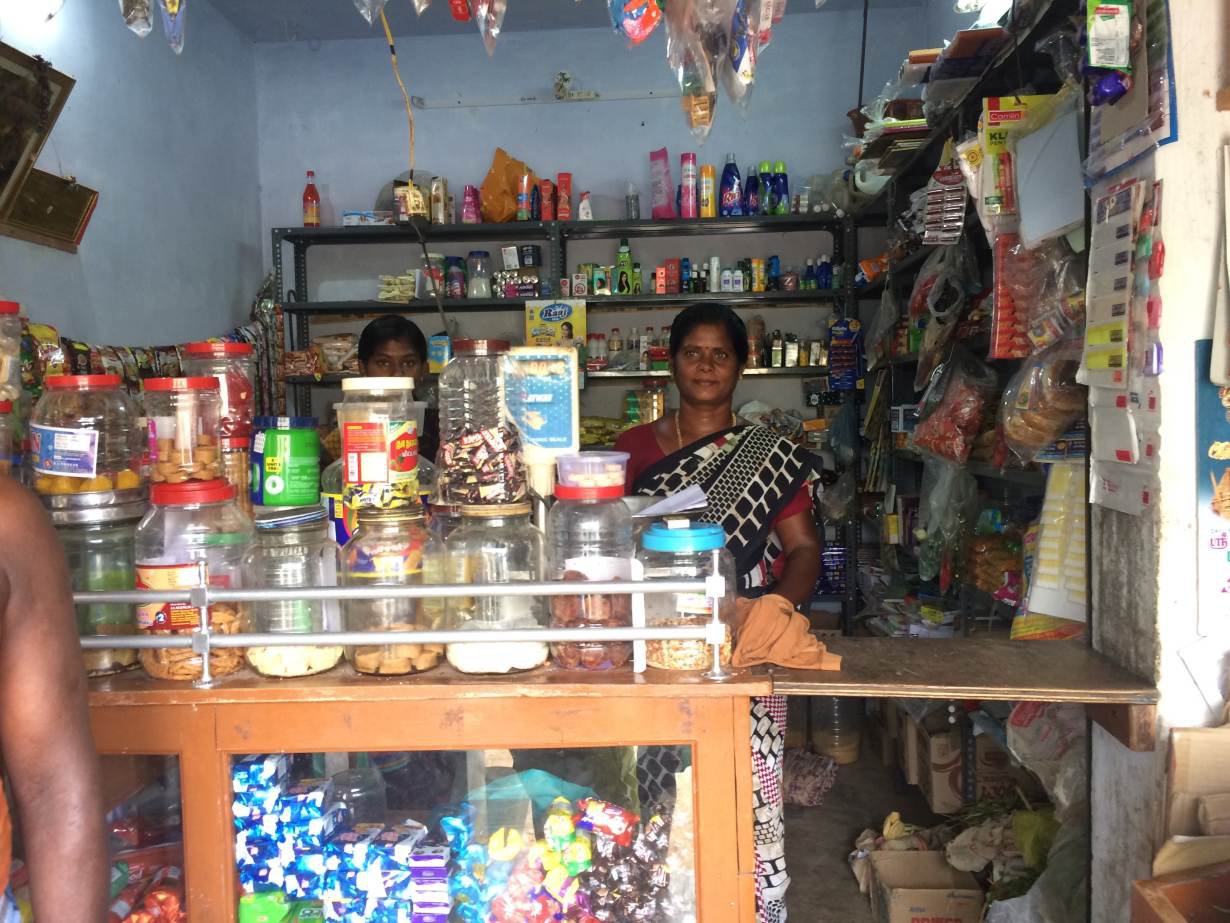 Vimala Robert, 41, has a diploma in tailoring but she works on a government-run rural jobs guarantee program, which offers work at the minimum wage for 100 days a year.

She also sells milk and works as a day laborer to ensure there is a steady income to bring up her three daughters.

“I tried setting up a tailoring business, but it didn’t take off,” Robert told the Thomson Reuters Foundation, taking a break from drawing a community map at a school in Ayyampatty in Tiruchirappalli district.

“Now when I am drawing this map and we are discussing it, I can see why my tailoring shop didn’t take off.” she said. “Location matters so much and that is something I am now beginning to understand.”

Both Robert and Victor have no sustained income and said they spent many days a month worrying where the next meal would come from.

Victor tried selling homemade soaps and cleaning products where she worked and in her village but never made a profit.

At the end of a one-month process of “memorizing and mapping” her neighborhood, Victor now has a few ideas that may work.

“I have cows and hens and usually sell my produce to traders who come home and buy from me,” Victor said.

“But now when I look at the map we have drawn, I see that selling directly at the wholesale market might get me a better price. The map shows me the market is really not as far as I imagined it to be.”

Distance has been a big consideration for both women. Like many Indian women, they are not keen on taking jobs far from home due to safety fears, leaving them with limited options.

“Most of these women are illiterate and dependent on daily wages to survive,” said Indhumathi Radhakrishnan, a coordinator with the CFCA.

“Drawing kolams comes naturally to them and they have used that effectively to understand the surroundings they live in. The maps show them the ground reality and future possibilities.” 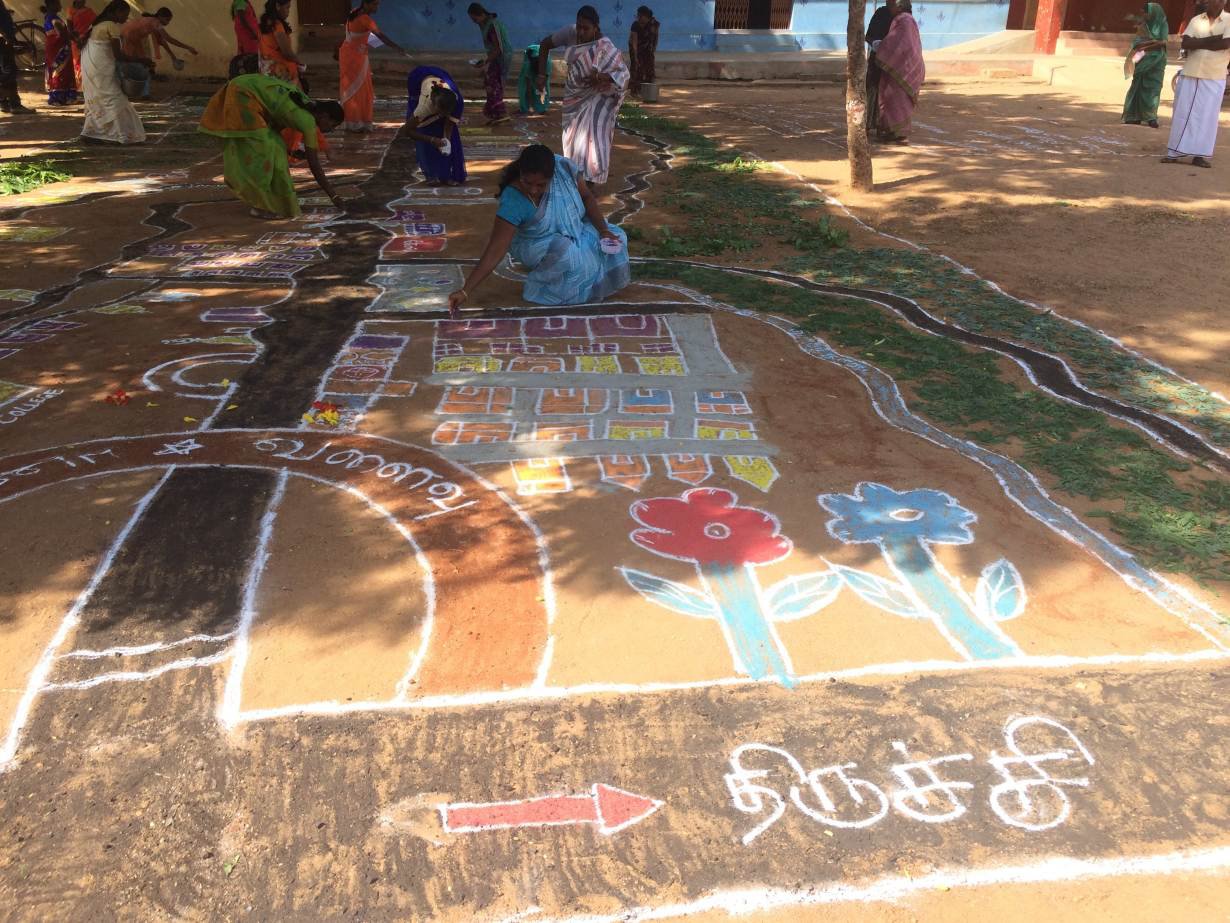 Roselin Savariyammal’s grocery store is easy to spot, bang on the highway connecting the cities of Tiruchirappalli to Dindigul and a stone’s throw from her village home.

Like most mothers in her self-help group, she was going with her husband to work at construction sites or government run job sites.

“It was at one of these mother group meetings that the question of regular income was discussed by the women,” said Radhakrishnan of CFCA, which facilitates the meetings.

“The need to understand the challenges led to the idea of the maps, which has slowly resulted in flourishing jobs.”

When Savariyammal’s group first drew their community resource map, the distance of 12 kilometers (7 miles) between her home and the nearest market stood out.

“All of us were traveling to town to buy our essentials at least once a week and it took us half a day to go, shop and come back,” said Savariyammal, between attending to a steady flow of customers at her shop.

“The map made me see that there was no grocery store anywhere in my neighborhood and I decided to start one.”

Taking a loan from her self-help group, Savariyammal opened her shop with just a few basic essentials. Three years later, she now stocks vegetables, stationery, groceries and anything else her customers demand.

Like her, the map helped Jaya Bharati open her tailoring shop in a neighborhood with schools and hostels to meet a steady demand for uniforms and clothes.

Devi, who goes by one name, makes disinfectant from home. The mapping helped her take her products to small companies in the area and her business suddenly boomed, like Savariyammal’s.

“I still go to the town market, but now only to buy things for my shop. I recently added a small fridge and am selling milk, curd and soft drinks as well. I chose the right place to set up my shop and it has turned things around for me.”