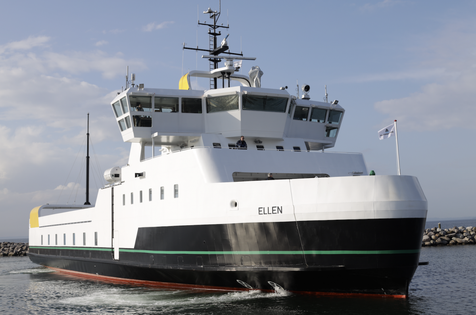 “E-Ferry Ellen”, the world’s largest all-electric ferry, has made its maiden voyage connecting the island of &AElig;rø, population 6,000, to the rest of Denmark. The route is 22 nautical miles long.

The ferry, which now connects the Danish ports of Søby and Fynshav, was built at the shipyard on the island of Als through a partnership between &AElig;rø Municipality and the European Union. The project is part of Danish Natura, which aims to provide environmentally friendly transport for local residents. It was initiated in 2015 and was funded by the EU through the Horizon 2020 and Innovation Program.

The ship, capable of carrying 30 vehicles and 200 passengers, is powered by a battery system with an unprecedented capacity of 4.3MWh provided by Leclanché SA (SIX: LECN), one of the world’s leading energy storage companies. The operators estimate the electric ferry will save over 2,000 tons of CO2 per year in its operation.

See also: The Energy Revolution Happening At The End Of The World

Participating in this event celebrating the first scheduled ferry service between the two Danish islands were the respective mayors of the two municipalities, Ole Wej Petersen of &AElig;rø and Erik Lauritzen of Søndeborg. It took over two years to construct the vessel and the process was not always smooth. Søby Værft (Shipyard) director Roar C. Falkenberg said: “We believe electric ferries are the future and we now have a huge amount of knowledge. So we feel well equipped for the coming years and the development of battery power on ferries.”

Executive Director of Danish Shipping, Jacob Clasen, added that he expects more ferries in Denmark to be electric in the future, saying: “Every ferry route is unique, so each must be considered individually. Many of the ferry services to smaller island receive (financial) support, so there is also the question of whether the will is present.” One issue for harbors to consider is the availability of sufficient electricity supply.

See also: US Businesses Are Benefitting From Ambitious Environmental Goals

E-Ferry Ellen is around 60 meters long and 13 meters wide, with a capability of traveling at speeds up to 15.5 knots. It uses high-energy G-NMC lithium-ion cells with unique safety features, including a bi-cellular laminated design and ceramic separators. The battery system is divided into 20 units, each connected to separate converters that control the energy output.

To reduce the ferry’s weight, the passenger and car decks are on the same level and the bridge is made from aluminum instead of steel. The vessel’s furniture is made from recycled paper.  The E-ferry has been designed with unique integrated battery and transmission systems that offer unparalleled operating efficiency .

Anil Srivastava, CEO of Leclanché, said: “We are very proud to provide a specifically designed unique lithium-ion battery system to this ferry, the precursor to a new era in the commercial marine sector. With its 4.3MWh capacity, the E-ferry represents a new milestone in commercial marine propulsion. Over one year, it will prevent the release of 2,000 tons of CO2, 42 tonnes of NOX, 2.5 tons of particulates and 1.4 tons of SO2 into the atmosphere. This project demonstrates that today we can replace fossil fuel thermal drives with clean energy, and thus contribute to the fight against global warming and pollution for the well-being of our communities.”

In Scandinavia, there is the potential to convert nearly 200 ferry routes to electric within the next decade and across Europe over 1,000 ferries could be converted. The systems could also be used in other marine applications including hybridization and peak shaving of auxiliary loads of cargo vessels and cruise ships. In 2015, the global marine hybrid propulsion market was valued at US$2.6bn. It is expected to reach US$5.2bn by 2024, representing a CAGR of 8.2 percent from 2016 to 2024. The market for marine batteries is anticipated to double by 2020, when it is predicted that about 80% of new coastal vessels will include battery operation.