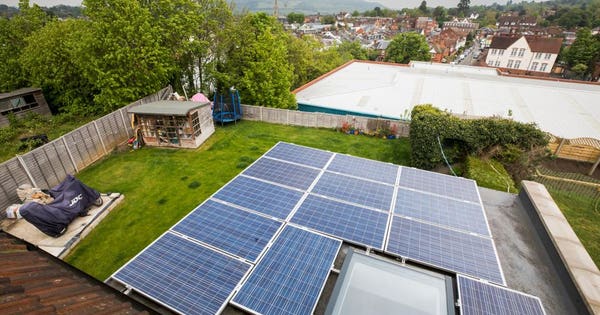 Solar panels which form part of a Lightsource BP smart home solution sit on a flat roof at a residential property in Dorking, U.K., on Friday, May 3, 2019. Companies like Lightsource, in which British oil major BP Plc holds a stake, are trialing smart systems in people’s homes that will do everything from generating solar power, storing it and managing consumption. Photographer: Chris Ratcliffe/Bloomberg Photo cCredit: © 2019 Bloomberg Finance LP

Having lived with four solar panels powering my narrowboat in London, I am aware of the importance of solar energy and how lessening one’s carbon footprint is not only possible, but it mostly involves a paradigm shift where individuals must make a decisive leap to move off the grid to alternative green energy.  And the shift is not as traumatic as many think. Yet, dense urban areas are largely not the best places to switch from carbon-based energy sources as the alternatives are modest at best. Moreso, there are constant debates about if solar power is really ecological or if the carbon-based energy used to create solar energy is also a new problem to confront to include the fact that solar panels are difficult to recycle.

Recently, however, there are leaps in innovations being made with solar energy technology that might be game changers to both the solar industry and how we will differently embrace solar energy. For instance, the most common type of solar cell today is that of crystalline silicon (c-Si) which has dominated the solar industry for decades.  While there are other materials that can be layered in thin films like copper indium gallium selenide (CIGS) and cadmium telluride (CdTe), these thinner films have barely dented the market simply because they are more expensive and difficult to produce. Mono- and polycrystalline cells have persisted largely because of their cost and ease of manufacturing, plus there have been innovations such as thin-film photovoltaics where microscopically think coatings of semiconductor material onto an underlying material will result in better incorporations of photovoltaics into buildings. While solar panels can be great, they are bulky, a safety hazard should they detach and they come with their own carbon footprint.

In recent years, however, the innovation of perovskite solar cells may very well revolutionize solar energy. Perovskites, third-generation solar cells, are composed of a calcium titanium oxide mineral which is composed of calcium titanate (CaTiO3) and they have started to make their debut outside the laboratory over the past year. Their high absorption coefficient enables ultra-thin films of around 500 nm (one nanometer equals one billionth of a meter, or 0.000000001 m) to absorb the complete visible solar spectrum. This new technology will leave traditional solar panels in the dust. What this means for the future of architecture is that every build could feasibly be covered in these cells without disrupting the esthetic form, colors, textures and styles. In fact, these solar cells are already being integrated into clothing where Nottingham Trent University has developed a way to embed micro-solar cells into yarn which can be woven into textiles. What is certain is that solar panels are being reinvented and recast through thinner materials where the tensile strength can meet architectural and engineering standards while also improving the energy output.

What does this mean for how we have until now embraced solar technology given the world’s largest solar farms in Tamil Nadu and Ouarzazate? Will this new technology invalidate previous solar technology? The newer technology does not invalidate the old by any means as solar farms necessitate sturdy constructions that thinner cell technologies might not be robust enough to meet at present. But given the versatility of perovskite solar cells, we are able to see in the near future architecture whose exterior is entirely incorporated of perovskite cell technology eliminating the prerequisites for solar cells on uniquely flat roofs. Perovskites are stand-alone-cells which means that they can be applied to windows as well as walls and roofs of all buildings.

Making inroads in solar cell technology, China holds the world’s largest market for photovoltaics and solar thermal energy and since 2013 has been the leading installer of solar photovoltaics (PV) on buildings. And just this week Huawei announced its entry into Israel’s solar energy market this week. In order for China to meet its housing needs, however, the construction of most modern living quarters comes in the form of tall residential towers whose roofs would hold very few solar panels as compared to their vast exterior walls. This is one of the challenges that Chinese cities which attempt to take part in the ecological betterment are facing today. Still, China produces roughly 60% of the worlds solar panels, two-thirds of its energy still come from coal.

With the new generation of solar power, we must adjust our cultural expectations as to what an energy efficient building “should look like” since the new wave of solar energy production will very likely come in the form of a perovskite cell coating on the exterior of diversely-shaped houses, office spaces, vehicles and clothing. We can soon say goodbye to the box-like forms of solar-powered roofs and embrace the architectural curves fo the future.