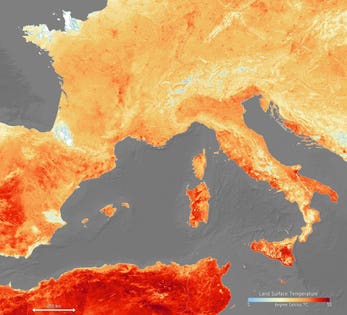 A devastating heatwave is happening in Europe right now. Temperature records are falling and not just by a small margin. The death toll is starting to rise and is prompting memories of the 2003 European heatwave that killed 30,000 to 50,000 people according to most estimates. The World Meteorological Organization tweeted on Friday:

For the first time on record, #France sees a temperature above 45°C. Villevieille measured 45.1°C this afternoon at 1459, topping the previous record of 44.3°C set just an hour previously, per @meteofrance  #heatwave #climatechange

According to meteorologists at Weather.com, a large high-pressure system over Europe is the “weather” factor responsible for the heatwave. Weather is, in part, governed by the space-time patterns of a series of waves in that fluid overhead called the atmosphere. It exhibits natural and day-to-day variability. Some voices will roll out the predictable narrative that heatwaves happen naturally. They do (duh!). However, an increasing body of scientific literature and simple common sense tells us that something else is going on too.

University of Georgia atmospheric sciences professor John Knox offered one of the most compelling and clear analogies to explain why an anthropogenic climate change signal is increasingly associated with the European heatwave. Knox wrote:

The old record for the nation was 44.1C (111.4F), from the deadly 2003 heat wave in Europe. So, France just bested its high temperature by 3 degrees Fahrenheit. That’s a lot. As with, say, 100-meter dash records in seconds, national temperature records in degrees should be broken in tenths, really hundredths–not integer values.If this were the world of track and field, a new record of this extremity would prompt immediate concerns about doping. The runner is fast, but no way is he or she THAT fast.

By the way, an astute Tweet noted by @robsobs pointed out, “Note that at least 12 other “runners” beat the previous record as well, and all of this happened before the usual peak heat period.”

Of course, you have the small but very loud crowd that will spew cliche and irrelevant points narratives that actual climate scientists are aware of or have long considered. For example, I saw a person imply that it is not a big deal to have a heatwave in the summer. Professor Knox agrees but points out that summer in France can be hot, but it should not be this hot and certainly not this early. Further, actual climate scientists have assessed how contemporary extreme events are linked to climate change. Previously in Forbes, I summarized the 2016 National Academy of Science report on attribution:

Confidence is greatest for extreme events related to aspects of temperature (e.g. extreme heat and lack of extreme cold events). Attribution science is relatively young but has advanced rapidly. The National Academy panel noted that attribution is most reliable when there are sound physical principles, consistent observational evidence, and the ability for numerical models to replicate the event. These “three legs of the stool” were used as benchmarks to rate the confidence.

The graphic  below conveys that there is very high confidence that the “fingerprint of climate change” is smudged all over the current generation of heatwaves on Earth. Numerous studies affirm that heat waves are increasing (and will continue to) in frequency or intensity as climate changes. A 2018 study in Environmental Research Letters found that across 571 cities:

Another climate zombie theory (something that keeps coming up though scientists have long disproven it) seen floating around the Internet is that all of the numbers are wrong because the thermometers are in cities or near asphalt. You will typically see some cherry-picked image of a thermometer near a road or building. I always find this one to be amusing because climate scientists are smart enough to know about urban biases. In fact, I wrote an entire article (link) about this misguided attempt to confuse people.

The current heatwave is very dangerous. The combination of record high maximum and minimum temperatures is a double whammy for humans. Warm nighttime temperatures are particularly dangerous for vulnerable populations like the elderly, children, or people without sufficient air conditioning.

As I close, it should be noted that not once did I mention a polar bear or the year 2080. These are “here and now” concerns.