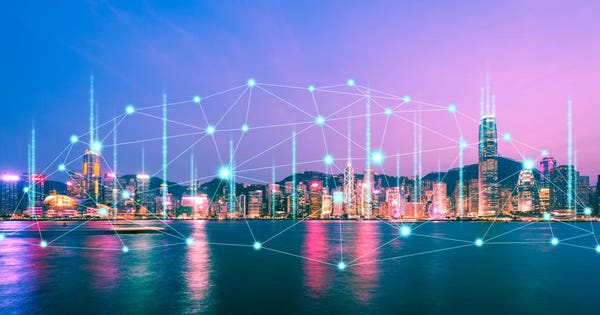 If you are interested in this story then read also Governments Look To “Smart Islands” For High Tech And Low Carbon Solutions.

As the world becomes increasingly interconnected and technology-dependent, a new wave of smart applications is changing how we approach everyday activities. Utility appliances such as intelligent fridges (yes, you read that right), personal assistants like Amazon’s Alexa or smart home security applications create opportunities for more efficient living. While the ideas of “Smart Cities” has been proposed as the future of urbanism, the question remains: how do we integrate this new technology for the ultimately “efficient” society?

Hong Kong is at the cutting edge of smart technology.

Cities Of The Future

Smart cities bring together infrastructure and technology to improve the quality of life of citizens and enhance their interactions with the urban environment. But how can public transport, real-time air quality meters, energy production integrated?

The Internet of Things (IoT), could have some of the answers. Created as part of the smart technology movement, the IoT enables various objects and entities to communicate with each other through the internet.  By creating a network of objects capable of smart interactions, the door is opened to a wide range of technological innovations that could help improve public transport, give accurate traffic reports or provide real-time energy consumption data.

By rendering more technology capable of communicating across platforms, IoT generates more data that can help improve various aspects of daily life. Cities can identify both opportunities and challenges in real-time, reducing costs by pinpointing issues prior to their emergence and allocating resources more accurately to maximize impact.

By investing in public spaces, smart cities can be places where people want to spend more time. The city of Barcelona has adopted smart technologies by implementing a network of fiber optics throughout the city, providing free high-speed Wi-Fi that supports the IoT. By integrating smart water, lighting and parking management, Barcelona saved €75 million of city funds and created 47,000 new jobs in the smart technology sector.

The Netherlands have tested the use of IoT-based infrastructure in Amsterdam, where traffic flow, energy usage and public safety are monitored and adjusted based on real-time data. Meanwhile, in the United States, major cities like Boston and Baltimore have deployed smart trash cans that relay how full they are and determine the most efficient pick-up route for sanitation workers.

The Internet of Things has led to a plethora of opportunities for cities willing to implement new smart technology to improve the efficiency of operations. Furthermore, tertiary institutions are also looking into maximizing the impact of integrated smart technology. Places such as university campuses and island communities provide smaller laboratories to implement technology in a more manageable environment.

Smart shopping carts sit at the entrance to a grocery store in the Long Island City neighborhood in the Queens borough of New York. Amazon.com Inc. opened a cashierless convenience store called Amazon Go, marking its biggest effort yet to change the way people shop in the physical world. Today a fleet of companies are working to replicate elements of Go or invent other ways of streamlining store operations.

Universities are essentially smaller, more condensed versions of cities, boasting their own transport systems, small businesses as well as their own citizens (students). This makes campuses the perfect testing ground as Manchester Metropolitan University’s IT portfolio manager Tori Brown explains in The Guardian: “The smart campus idea was first floated in spring 2016. As more projects and initiatives kept coming to light, it felt right to bring these together to tell a story around student engagement and how we can use technology to support this.”

Brown illustrates how smart technology could go even further in improving efficiency by tracking the movements and actions of students: “It’s a continually evolving plan. There are possibilities around smart kiosks with personalized information, true cross-campus digital and personalized wayfinding. These include wearable tech like smartwatches and phones.”

On campus, your phone or smartwatch could remind you of a class and how to reach it, give you updates on your assignment due dates as well as warn you about overdue books you have borrowed from the library. Whilst these may seem like small improvements compared to the ones implemented in various cities worldwide, they can help form a blueprint for future development that can be upscaled to fit larger developmental needs.

As smart technology continues to improve and urban centers expand, both are bound to become interconnected. Several countries including the UK have planned to integrate smart technology in upcoming infrastructure development as they see it as the future of governance.

The potential to improve several aspects of public service systems as well as quality of life and reduce costs has driven the demand for smart cities. By taking a step towards the future, we will improve not only how we interact with our general environment but how cities interact with us, ensuring that we receive the best quality options and waste fewer resources.

If you are interested in this story then read also Governments Look To “Smart Islands” For High Tech And Low Carbon Solutions.