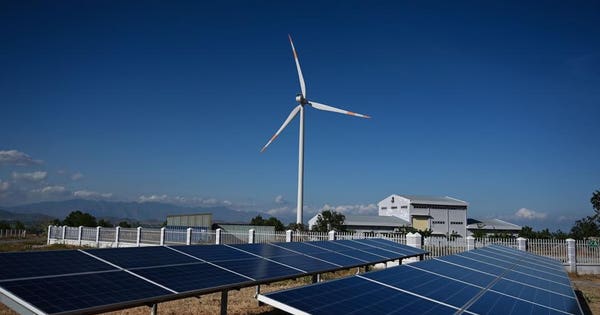 Renewable energy jobs are shifting into new markets, particularly in Asia, as more countries begin to manufacture, trade and install sustainable energy technologies – according to the latest annual review of jobs in the industry, published today by the Abu Dhabi-based International Renewable Energy Agency (IRENA).

However, it is difficult to draw any direct comparison with previous years’ figures, as this year’s total includes an estimate of 372,000 jobs in off-grid solar power (something not included last year). In addition, IRENA warns that some of the increase in the number of jobs may simply be down to more accurate gathering of data from around the world.

Despite these caveats, there appear to be some clear trends in terms of where jobs are being created.

Currently 39% of all renewable energy jobs are in China, but the number of other countries getting in on the act is growing every year. Brazil, the U.S. and the E.U. are all important jobs markets too, but the most notable trend is the emergence of renewable energy industries in more corners of east and southeast Asia. Countries such as Malaysia, Thailand and Vietnam were responsible for an increasing share of growth in renewables jobs last year, meaning that Asia as a whole retained a 60% share of the total renewable energy jobs market.

According to IRENA, factors ranging from national industrial policies to changes in international supply chains and trade patterns as well as industry consolidation are all contributing to the geographic diversification of the jobs market.

Jobs are being created from a combination of both renewable power plants being built and more manufacturing facilities being developed. In North Africa, for example, a new solar PV module factory in Al-Hoceima, Morocco is creating around 100 jobs for locals – until now, the main employer in the renewables sector in the country had been the Noor Ouarzazate solar power plant. Over in Egypt, construction of the Benban solar complex is expected to require more than 10,000 workers.

Solar projects such as these are the biggest sub-sector of the industry, in employment terms at least. Solar photovoltaic (PV) jobs account for 3.6 million of the total and these jobs are increasingly being created in new markets.

According to the report, last year saw an increase in solar PV jobs in India, Southeast Asia and Brazil, while China, the U.S., Japan and the E.U. all lost jobs (despite this, China still accounts for around two-thirds of all solar PV jobs worldwide). Among the top ten solar PV jobs markets now are Bangladesh, Malaysia and Taiwan.

In the other parts of the industry, bioenergy supported 3.2 million jobs. In this area, Brazil is dominant, accounting for 40% of all jobs, even though the U.S. is the largest producer of biofuels. The different characteristics of those two markets is explained by the fact that some middle-income countries such as Brazil, Colombia and Indonesia tend to have labor-intensive supply chains, whereas operations in high-income economies such as the U.S. and E.U. are generally more automated.

Between them, solar PV and biofuels continue to drive the growth in employment in the renewable energy industry as a whole. Other areas such as wind and hydro have seen essentially flat growth over the past few years.

Hydropower employs 2.1 million people. Being far more established than other renewable energy sources, jobs growth in this area is slower than the industry average, but those jobs are spread more evenly around the world.

Wind power currently supports a further 1.2 million jobs, with onshore projects the main driver of the industry. Around 1 million jobs are accounted for by other, more niche technologies, including solar heating and cooling, geothermal energy, concentrated solar power and tidal power.