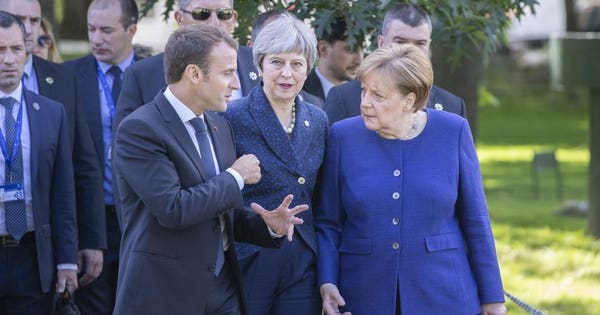 As the European Union gets closer to decision time over whether to commit to reducing carbon emissions to net zero by 2050, more and more EU countries are warming to the idea championed by French President Emmanuel Macron.

Although Macron and German Chancellor Angela Merkel tussled over the feasibility of the idea earlier this year, last month she made a U-turn and embraced the 2050 goal. Then, yesterday, the United Kingdom announced it will unilaterally set itself a net zero by 2050 goal without waiting for the EU. It joins several other EU countries that have already set themselves a net zero target, some for earlier than 2050 such as Finland (2035) and Sweden (2045).

The news surprised many in Brussels, as the UK has not been particularly enthusiastic about the Commission’s proposal. It was not one of the eight EU countries that came out in support of a quick backing of the target at a summit in Romania last month, and for the moment London’s position seems to be that it should adopt the target nationally, but the EU should not adopt it.

The European Commission put forward its proposal to set the 2050 target last year, but it has yet to be approved by the European Council, made up of the 28 national EU governments. Poland, which sees itself as the leader of an Eastern European bloc wary of climate commitments which could hurt economic growth, has been fiercely resisting the idea. Until last month, Warsaw had the tacit support of Germany in this opposition.

“Net zero” means that emissions would be reduced to almost nothing, with any small amount remaining made up for by planting forests to soak up carbon from the atmosphere, or other abatement measures.

Next week’s European Council summit in Brussels will be the last opportunity to endorse the plan in time for a UN climate summit in New York in September. Macron wants the EU to be able to come to that summit with new more ambitious targets in hand, to motivate other countries to follow suit.

But the issue risks being delayed as the prime ministers in the Council haggle over who will become the next European Commission president, along with other EU top jobs. Diplomats don’t want to see the climate plan become part of the horse-trading that usually takes place between countries and political groups over who gets these top jobs. The decision may be delayed until the October Council. By then it will be too late to influence the world’s climate targets, say activists.

Ahead of next week’s summit, the NGO Climate Action Network Europe has released a map showing which countries support raising the EU’s climate goals, and which are standing in the way.

There are six countries in Eastern Europe, led by Poland, that have not signed on to any of the declarations in support of more climate action.

Twelve countries have committed to advocate for the 2050 net zero target at next week’s summit, and to ask for a review of the world’s ‘nationally determined contributions’ for the Paris Agreement at the UN summit in September, in response to the EU’s upped ambition.

Strictly speaking, these twelve countries could push through an adoption of the Commission’s proposal. But because I will require significant action by every EU country, it is the type of file where a unanimous approval is expected. This means all eyes will be on the Eastern six at next week’s summit to see if they maintain their opposition. If they do, the issue will likely be delayed until October.