Why Global Citizens Should Care
Child marriage denies girls their right to education, good health and wellbeing, and ultimately a chance at being empowered. Join us by taking action here to support Global Goal 5 for gender equality by helping to protect girls’ rights.

Child marriage remains one of the biggest challenges faced by girls around Africa. At the moment, there are 12 million girls who are forced into marriage before they’re 18 years old — which UNICEF says is the minimum age girls have to be before they can become brides.

Even more worrying, a report by United Nations Population Fund (UNFPA) predicts that 140 million girls around the world will be married before their 18th birthday over the next 10 years if nothing is done to stop child marriages.

As well as forcing girls away from their families, and often at the cost of continuing their education, child marriage can also lead to “early pregnancy and social isolation, interrupting her schooling, limiting her opportunities for career and vocational advancement,” according to UNICEF.

Girls who become wives while they are still teenagers also have a higher risk of experiencing domestic violence, according to global partnership Girls Not Brides.

But there is an ongoing global effort to put an end to child marriage, often led by brave and determined individuals. Here are six activists who are fighting child marriage in their countries.

Working in rural areas across South Africa, Sizane Ngubane leads a powerful movement for women and girls. The 72-year-old initially started the Rural Women’s Movement in 1990 out of concern about the forced evictions of daughters and widows from their homes after the death of their fathers or husbands.

She started working against child marriage in 1998 after being invited by the traditional leader of a village in KwaZulu-Natal who was concerned about the growing number of child marriages in their community.

A 2018 report by the Commission for Gender Equality found that at least 91,000 children of school-going age in South Africa are married.

While this might seem like a relatively small number, Sizani Ngubane believes that there is more to the problem than numbers show because of limited information about child marriage in the country.

In a 2015 interview with City Press, Ngubane expressed her frustration with child marriages.

“I am not sure whether it is poverty which is driving parents to give their daughters to old men, or if it’s just pure evil exercised by men who see young girls as sex slaves,” she said.

Child marriages in South Africa are part of a tradition called ukuthwala, which is the abduction of young girls to marry men who are generally strangers. It’s particularly common in rural parts of South Africa, according to GoLegal.

Rural Women’s Movement is now a coalition of about 500 community-based organisations, with members working with communities across all nine provinces of South Africa.

The organisation conducts workshops to educate everyone from girls to families about girls and women’s rights, including constitutional, land, property, and inheritance rights.

Kudiral Abiola, Temitayo Asuni, Susan Ubogu are on a mission to end child marriage in Nigeria. Image supplied by Never Your Fault.

Despite the fact the legal age of marriage in Nigeria is 18, some 22 million girls are married before they turn 18 — making Nigeria one of the African nations with the highest number of child brides. This is because of a loophole in section 29 of the county’s constitution that says “any woman who is married shall be deemed of age”.

Kudiral Abiola, 16, Temitayo Asuni, 16, and Susan Ubogu, 17, from Lagos are determined to tackle child marriage in Nigeria by tackling section 29.

At the beginning of 2018, they founded Never Your Fault, a nonprofit organisation that shines a light on child marriage and educates people on the impact it has on young brides.

Asuni told CNN she was inspired to take on the law after a newspaper article about young girls forced into marriage left her feeling helpless.

Abiola, who aspires to be a children’s rights activist, says girls’ rights go beyond early or forced marriage. In Nigeria, the age of consent is 11, and the three teenagers believe that this only serves to support child marriage.

“If you are 11 and you are married, you are considered to be a woman,” Abiola told CNN.

Abugo added: “At the age of 11, most girls should be getting an education — in the classroom, not the kitchen.”

They started an online campaign called RaiseTheAge in December 2018, calling on the government to increase the age of consent to 18. The petition has gathered over 160,000 signatures, and they have also now taken their work to communities.

“We have said before that this campaign goes beyond changing the constitution,” said Asuni. “It may have started with an online petition, but the people it affects don’t have access to the internet. So we want to educate them.”

Never Your Fault is preparing to hold a summit in Lagos on International Youth Day, on Aug. 12. 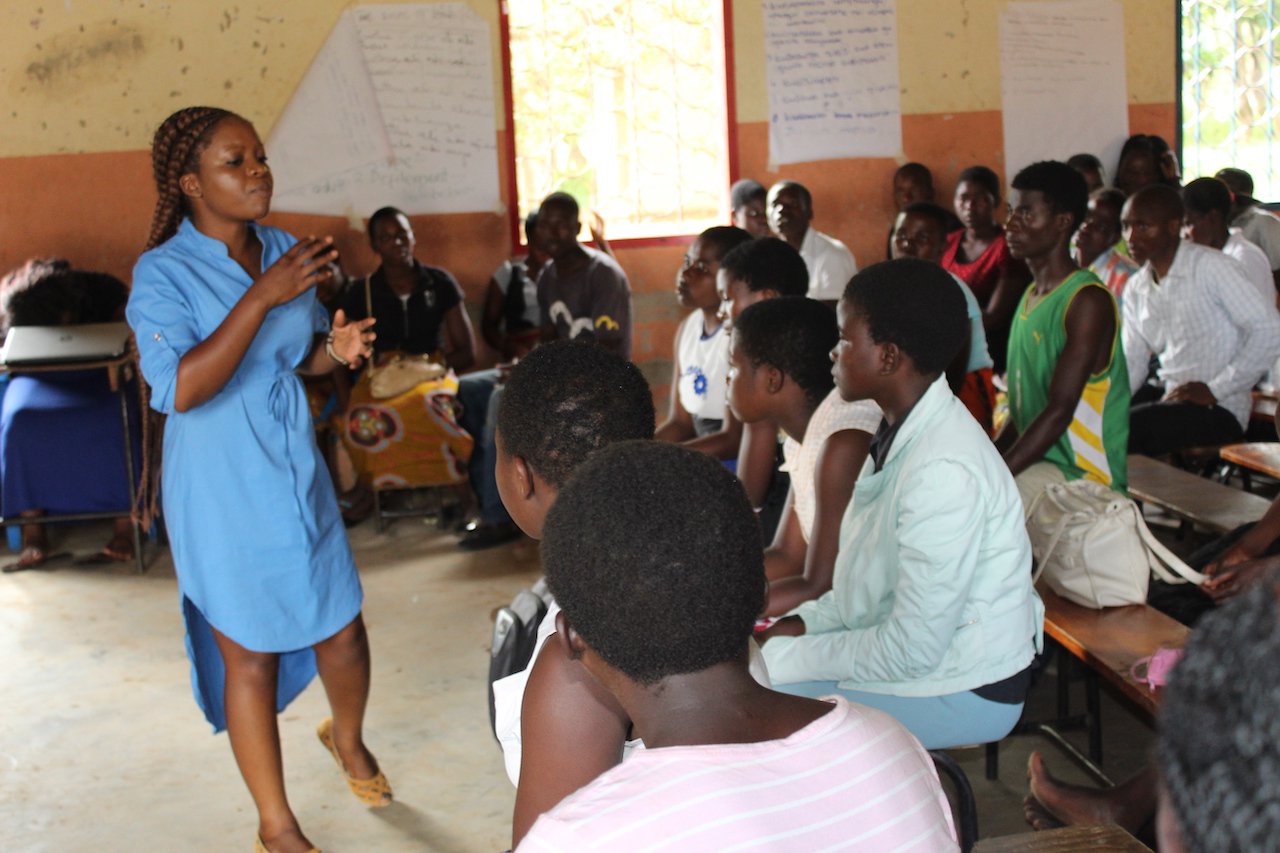 Memory Banda’s sister was a child bride, a fate that Memory was determined to avoid and spare other girls from. Image supplied by Banda.

Memory Banda was 18 when she was inspired to fight against child marriage in Malawi, after her sister was forced to become a child bride when she was just 11 years old.

“In the marriage she experienced so much tragedy, she got beaten up, [experienced] sexual violence, and I wasn’t surprised when later on the husband kicked her out of the house,” Banda told the World.

Malawi has the 12th highest rate of child marriage in the world, with 42% of girls getting married before they are 18, according to Girls Not Brides.

Banda works with the Girls Empowerment Network Malawi, Let Girls Lead, and other girls from her community, to help increase awareness about the issues faced by girls in Malawi.

The organisations have a project called “I Will Marry When I Want To”, which collects letters written by girls to articulate their experiences and hopes for their future.

These were turned into a petition and delivered to lawmakers, successfully getting them to raise the legal age of marriage to 18 in 2015.

But Banda was concerned about implementation, and continues to educate girls about sexuality and their rights.

“It will make a big difference and impact, but if and only if there are better ways to implement the programme so that more and more people are reached concerning the new law,” she told the World. 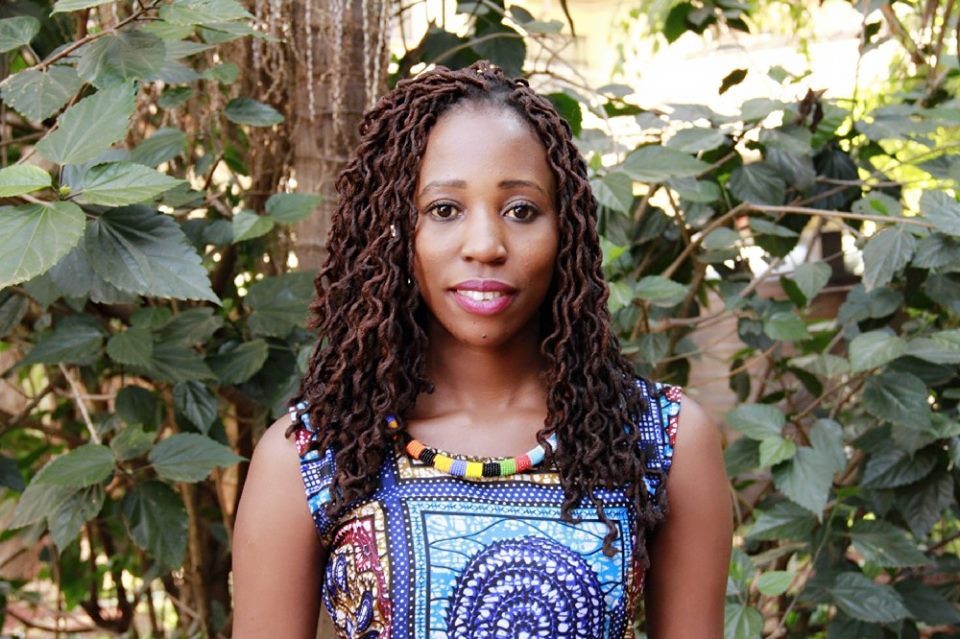 Petrider Paul, a girls advocate from Tanzania, is empowering girls with education. Image supplied by Paul.

Founder of the Voice Out Against Gender-Based Violence Initiative, Petrider Paul is a 24-year-old from Tanzania who is passionate about empowering women and girls as a way to fight gender-based violence.

Her activism was sparked by the early marriage of a friend when Paul was 15. Paul began her journey as an activist after being selected to be a Queen’s Young Leader in 2016.

She is now an advocate for girls’ rights, specifically in ending child marriage, female genital mutilation, and teenage pregnancies. In Tanzania, the law of marriage act is different for boys and girls, and makes it legal for a girl to get married when she is 15 while the age limit for boys is 18.

According to Paul’s petition on Change.org, up to 33% of girls aged between 12 and 24 in Tanzania drop out of school because of early pregnancy or marriage.

Meanwhile, at a rally in 2017, the country’s president John P. Magufuli said no pregnant student would be allowed to return to school. The president had to take back his words, however, after the World Bank withdrew a $300 million education loan in response.

Paul is putting on a big fight. She is championing change to the child marriage act and has challenged the government to stop blocking sex education in schools and put a stop to the expulsion of pregnant girls.

She also promotes education, and has a fund that crowdsources money to provide scholarships to young mothers who want to go back to school. She co-founded Youth For Change Tanzania, a movement that works with rural communities to educate young girls, and traditional and religious leaders about girls’ rights.

Speaking to Network of African Youths for Development, a Cameroonian youth empowerment organisation, Paul said: “Society can find me modern and look at me badly but as long as I am doing something for my fellow girls, I can see past this to a world where gender equality is possible.”

As a member of the African Union’s Youth Advisory board, she also continues to influence policy makers to prioritise girls and women.

From one of Ghana’s largest and poorest districts called Nima, Amina Ismael runs Achievers Ghana, an organisation founded with the help of one of her teachers in May 2011. Now aged 20, Ismael has a personal experience with child marriage.

Her uncle tried to force her into early marriage when she was only 12 years old. This interfered with her studies, causing her teachers to be aware of the situation. They involved the authorities and, after escaping, Ismael decided to make it her life’s work to make sure it doesn’t happen to anyone else.

In Ghana, Girls Not Brides says that one in every five girls are married before they are 18. Inspired by her ordeal, Ismael started a book club called Achievers Ghana in Nima as a way for girls to share their experiences. It evolved into a non-governmental organisation in November 2011.

“Achievers Ghana’s main objective is to inspire, educate, and equip girls in slum communities with the necessary skills to pursue every opportunity that is available to them in order to be responsible and useful citizens,” according to the organisation’s website. Ismael firmly believes that education is the best shot girls have a better life.

“Our parents who are not well educated think the best place for a girl is in her husband’s house and the kitchen,” she told Circumspecte. “This is not the best place because education is the key to success and to also help build a girl’s confidence and potential.”

There are currently 350 girls who are part of Achievers Ghana, and more than 88 are in coding classes to help improve their prospects in traditionally male-dominated professions.

As a 15-year-old in South Sudan, Mercy Akuot believed that she had the whole world at her fingertips. She excelled in school and wanted to become a lawyer.

But her parents had other plans and wanted to marry her off to an uncle. She ran away from her parents’ house and ended up at a shelter in Uganda, before being offered help by a man called Jonathan and his family.

“I felt blessed in my new home,” she expressed, while addressing a crowd at Kakuma’s first ever TEDx in 2018. Akuot was able to continue with school while living with Jonathan and his family. But not long after, fearful that her family would find her, Akuot fled again from Uganda to Kenya’s Kakuma refugee camp.

Kakuma is home to more than 185,000 people who have fled conflict and disasters in countries including South Sudan, Somalia, Burundi, and the Democratic Republic of Congo. At the TEDx talk, Akuot, who is a singer, said she couldn’t believe that her parents would let her marry a man much older than her, against her will.

”That might be their culture, but not mine,” she said.

Although she hasn’t yet been able to realise her dream of becoming a lawyer, Akuot is committed to fighting child marriage and making sure that young girls stay in school. She now leads a team of women to mentor young girls and offer a safe space for discussions about the danger of child marriage.

She also uses her music to highlight the often harsh realities of girls and women in her community and beyond, and uses her platforms as a speaker to advocate for young girls’ safety.