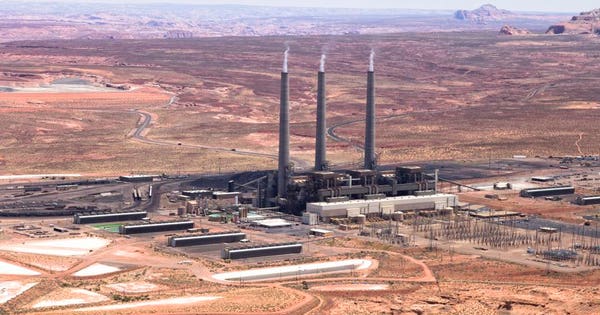 In years to come, it is going to become increasingly important to keep track of carbon emissions, as the fight against climate change intensifies.

But there are so many power stations and industrial facilities around the world emitting CO2 that it is almost impossible to keep track of them. Until now. A new scheme backed by Google is going to start tracking emissions of the greenhouse gas from space – and make its results public.

A new initiative by non-profits WattTime, the Carbon Tracker Initiative and the World Resources Institute (WRI) will use artificial intelligence and satellite technology to quantify the emissions from every large power plant around the world. The project is backed by a £1.7m grant from Google’s AI Impact Challenge, which issued an open call to organizations around the world to submit their ideas for how they could use AI to help address societal challenges.

The project will work by leveraging the growing global satellite network that surrounds the earth to observe power plants from space. AI technology will use the latest image processing algorithms to detect signs of emissions from power plants. To ensure its calculations are as accurate as possible, the project will combine data from a variety of different sensors operating at different wavelengths. AI algorithms will look at a whole range of different indicators of power plant emissions, from thermal infrared images, which indicate heat near smokestacks and cooling water intake, to visual spectrum recognition, which sounds complicated but simply means that satellites are looking for signs that a power plant is emitting smoke.

The information will be used to hold accountable polluting plants and also to enable new, advanced emissions reduction technologies. Regulations around the world are becoming stricter not just on carbon emissions but also on other pollutants that cause local air pollution but to be effective, any regulation, from local rules on air pollution to international climate agreements, rely on robust monitoring and verification regimes.

This new scheme will make it harder for governments or companies to avoid their legal responsibilities. It will also make it easier to hold organizations to account for any internal targets they announce.

“Carbon Tracker was the first organization to pioneer satellite-based power plant monitoring. We are excited to continue this innovative analysis in collaboration with our colleagues at WattTime and the WRI,” said Matt Gray, head of power & utilities at Carbon Tracker, which analyses how the transition to a low-carbon economy will affect investments in high-carbon companies, particularly energy generators and coal, oil and gas producers. It maps the risks, such as stranded assets and the investment opportunities that the low-carbon economy presents. The data generated by the project will make its mapping more robust.

San Francisco-based WattTime, which has pioneered a range of automated emissions reduction techniques using machine learning and power grid emissions data to allow smart devices to adjust the timing of their energy use and make the most of available clean energy, will lead the project.

“Far too many power companies worldwide currently shroud their pollution in secrecy. But through the growing power of AI, we’re about to lift that veil all over the world, all at once,” said Gavin McCormick, executive director of WattTime, which is a subsidiary of the Rocky Mountain Institute.

The data will also allow it to better match energy use and battery storage to peak clean energy production, and it will allow governments to incentivise renewable energy facilities in areas where they can have the most impact on reducing emissions. It will also allow concerned citizens to know where pollution is coming from and hold the polluters to account, which can often be more powerful than regulation in forcing action.

The WRI maintains the most comprehensive global database of power plants. “The more transparency we can provide for energy consumers around the world, the more likely we are to solve some of the monumental challenges facing our planet,” said Johannes Friedrich, a senior associate at WRI.