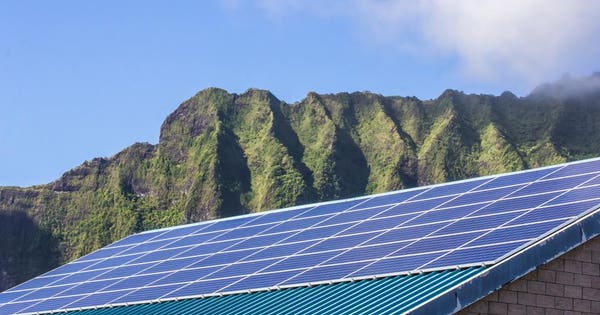 Blue Photovoltaic PV alternative renewable energy panels installed in rows on a roof with the lush green Ko’olau Mountain Range in the distance, gather green solar energy power from the sun in Kaneohe, Hawaii on the Island of Oahu.

In March 2019, just two months after utility Hawaii Electric (HECO) submitted seven large solar plus battery storage projects for review, the Hawaiian Public Utilities Commission (HPUC) approved six projects priced at $0.10/kWh or lower, making it the largest and lowest cost portfolio of renewables developed at one time in the state. The projects will contribute 247 MW of solar energy and 998 MWh of energy storage. The entire capacity of all six projects will be in 4-hour duration batteries. Unlike projects in most US states, the bulk of solar projects deployed in Hawaii are rooftop solar, not utility-scale. These projects will greatly increase the capacity of utility-scale solar on the archipelago, more than tripling the current output and moving the island closer to its goal of carbon neutrality by 2045.

The Importance of Grid Modernization in Hawaii

While utility-scale solar plus storage is critical to the state’s ambitious plans to fully decarbonize the grid, the energy generated by these systems in addition to the energy generated by the state’s vast network of distributed resources necessitates modernizing Hawaii’s electric grid. While previous iterations of HECO’s grid modernization plan were rejected, the revised plan that was approved by the HPUC in March 2019 is taking a more surgical approach. HECO said the $86.3 million plan will enable the utility to develop a dynamic, high technology platform that can provide real-time data on two-way power streams.

Creating a modern electric grid is not a one-step process. A series of rollouts is necessary to build a grid capable of evolving into a conduit for coordinated import and export of energy and related services, combining distributed resources and grid-scale resources to balance electricity supply and demand. The first phase of the grid modernization program, which commences later this year, includes deployment of advanced meters for customers with rooftop solar and variable rates.

Hawaii has the highest penetration of customer-owned PV systems in the country. While the state has shifted away from incentives for deployment (e.g., net metering) to incentives that encourage these resources to add value to the grid or provide services the grid needs (e.g., Smart Export and Customer Grid-Supply Plus), with over 80,000 private rooftop solar systems in operation, gaining visibility into the edges of the grid is of paramount concern for the utility.

Overall, HECO’s grid modernization plan will allow the utility to grow the amount of private rooftop solar, use more storage and advanced inverters, and incorporate a vast array of advanced energy management tools, such as demand response.

The majority of new residential energy storage systems (RESSs) installed in the US in 2019 have taken place in just two states: California and Hawaii. Driven largely by changing net metering rules and increasing customer interest in backup and solar self-consumption, RESSs can be a highly flexible and valuable resource, improving efficiencies for system owners and the power grid. The RESS market has been driven primarily by early adopters concerned with supporting clean energy or self-sufficiency more than economic self-interest. In 2019, many utilities see RESSs as a new avenue to improve their services and relationships with customers at a time when new technologies are presenting a real risk of load defection.