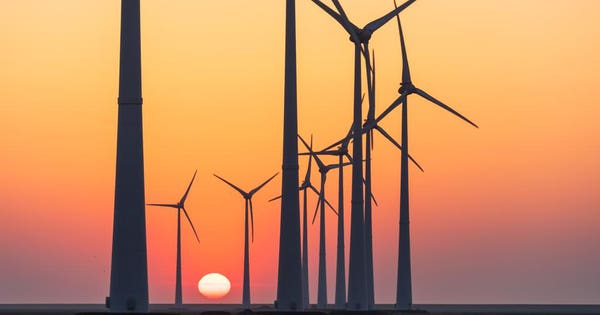 Sun setting behind a row of modern wind turbines.

A common criticism of clean energy technologies like wind and solar is that they impose undue costs on consumers and the wider economy. A new working paper from the University of Chicago’s Energy Policy Institute points out as much, stating that renewable energy technologies, and the state-level policies that support them, have resulted in $125 billion in added electricity costs nationwide over the past decade. The continued high cost of renewables, the study finds, results largely from their intermittency and the need to build additional transmission lines and generation, most commonly gas-fired turbines, to provide electricity when the wind doesn’t blow and the sun doesn’t shine.

Fair enough. Wind and solar are still new and maturing additions to the nation’s electricity system, and intermittency is a challenge that will require new and costly technologies, including grid-scale batteries, to solve. Yet, critiques that focus singularly on the high cost of renewables, including a recent article that riffs off of the same Chicago paper and misleadingly refers to wind and solar as “unreliable,” a term the report authors never use, almost invariably sidestep a fundamental question: High cost compared to what?

It used to be that the answer to the “what” was simple. Any new energy technology’s economic merit was judged against the cost of the era’s preferred type of generation. For a long time that was coal. Nuclear followed until the cost of new reactors began to spiral out of control in the U.S. Today natural gas is the cheap fossil choice.

Yet, due to climate change, the choice is no longer a binary one that pits the cost of renewables against the status quo. There is now a third reference point, which is the future and, more specifically, the economic damages that will come from climate change. The U.S. government’s own Fourth National Climate Assessment, published last November, projects these costs to total nearly $300 billion by 2100. A report in Nature Climate Change points out that the economic damage due to climate change will be higher for the United States than any other nation save India. The U.S. will suffer 12% of total global climate damage. These damages will result in part from declining agricultural yields, wrecked infrastructure, and the need for electric utilities to reinforce the power grid against extremes of nature.

Conversely, heading off the worst of climate change by investing in renewables and other means is projected to add $20 trillion to global GDP  by the end of the century. In the near term, investment in renewables is good for jobs. U.S. wind and solar power employment, effectively nil at the start of the millennium, grew to 457,000 in 2017. That compares to 159,000 coal and natural gas jobs in electric power generation.

So, why are some still simplistically comparing renewables on a cost basis against their current alternatives? At this unprecedented point in history, when highly credible warnings of climate doom are multiplying, shouldn’t we be looking at renewables not as a cost but for what they really are, an investment that will provide returns far into the future by limiting damages, and enabling future economic growth and continued prosperity?

The idea of investing in a better future isn’t so radical, and it calls upon the spirit of greater good and deferred reward that fueled America’s development. Sixty-three years ago, in 1956, President Dwight Eisenhower framed the Federal Aid Highway Act as such an investment in the future. The government determined to spend $33.5 billion ($328 billion in today’s terms) to crisscross the nation with 41,000 miles of highways and pave the way for vast and efficient interstate trade.

The investment paid off. A 2011 RAND Corporation report “found that highway capital accounted for about 25 percent of average annual U.S. productivity growth from 1950 to 1989.” Along the way, the map of the United States was redrawn as suburbs grew. Industries that fueled transportation, like Detroit automakers and the steel industry, dominated American industry.

In fact, as a 2008 Los Angeles Times article notes, “Eisenhower likely didn’t fully realize that he was creating not just a public works program but an economic and social blueprint for the next 50 years.” The government likewise paid for the early development of the Internet, reworking the foundations of global communications and commerce and paving the way for American hegemony in information technology, as exemplified by the success of Silicon Valley. “Visionary infrastructure projects such as [the Internet] are part of what has allowed our economy to grow so much in the past century,” wrote Scientific American in 2012.

Not everyone was a winner in these transformations. Many of the small towns that Nat King Cole alluded to in the 1946 hit song, “(Get Your Kicks on) Route 66,” withered when new interstate highways redirected traffic elsewhere. In the same vein, framing wind and solar power as high cost rather than good and necessary investment serves the purpose of the vested interests that have the most to lose in a transformed energy future.

Those with something to gain, notably the majority of the American (and global) public, see things differently. More than half of all states have proven their willingness to support renewable portfolio standards and renewable energy credit (REC) programs. And, in the same spirit of the National Highway Act, a number of states are now lining up to support uneconomic nuclear power plants with Zero Emissions Credits (ZEC) policies. While ZEC’s don’t support new carbon-free nuclear power and therefore aren’t technically building the physical infrastructure of the future, they are part of a larger effort to limit the need for more expensive climate mitigation and adaptation costs.  ZECs, too, are an investment in the future.

The spirit of the Highway Act is also showing up lately on the national stage, notably in the Green New Deal that calls for direct government spending on an array of clean energy technologies. And to those who might say carbon-free renewable energy costs too much today to justify continued outlays, the answer is that there is no choice. As researchers from Stanford University, the National Bureau of Economic Research and Woods Hole recently made clear, the longer we wait to decarbonize our economy, the more dramatically future GDP will decline. All of these investments must come today, as there’s no time to wait.

Finally, it’s important to note that the benefits of clean energy investments are quickly multiplying, a point that those who frame wind and solar in the terms of cost overlook. Minneapolis-based electric utility Xcel Energy, which has invested heavily in wind power and aims to go 55% renewable by 2026, reports that its average customer bills have fallen since 2013. Part of the savings are due to wind tax credits, but those same credits that have helped finance wind development have had the benefit of reducing the cost of wind by 70% over the past decade.

Wind and solar don’t stand alone in the effort to check the advance of climate change. They’ll be part of a wealth of technologies and strategies to reduce emissions, which will necessarily include nuclear. Today’s investments in renewable portfolio standards improve the chances that these technologies will be ready to meet the climate challenges that await.