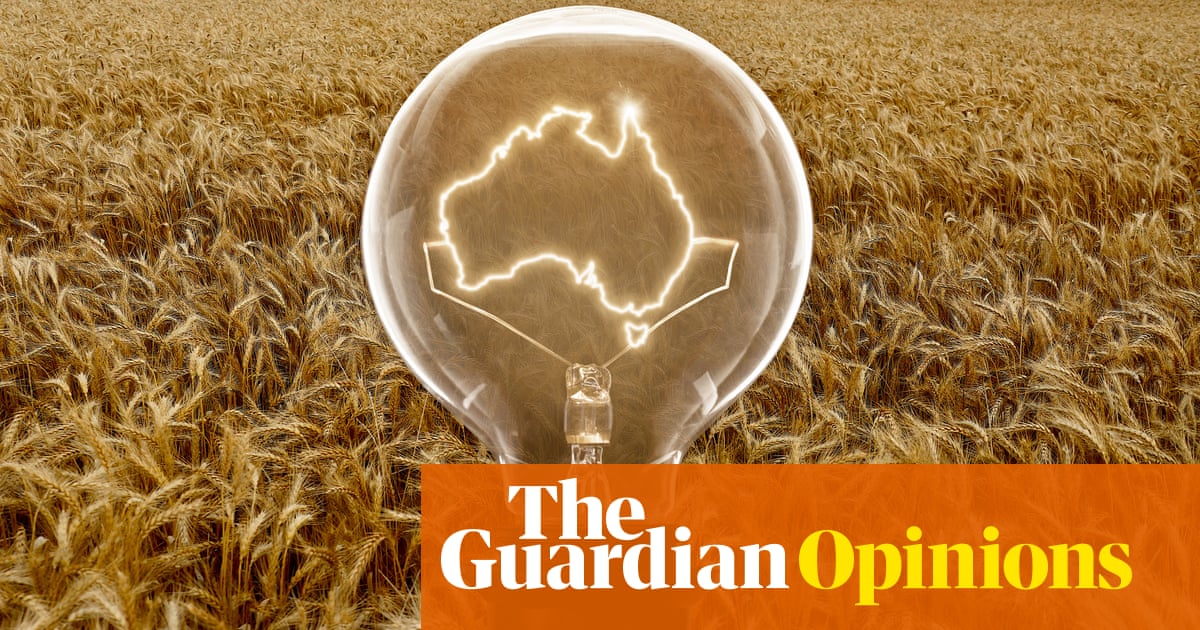 How should we stare down the challenges of a new decade? Where will we find hope and solutions? This is the first piece in a new series in which we ask prominent Australians to write about one thing they think could improve the nation in the 2020s

We need a revolution in Australia. Many can sense that. We’re richer than ever, but when it comes to our environment and the climate we’re in a big hole – and we need to stop digging. We must find new ways of living on this incredible continent we have brought to the brink of climatic and ecological catastrophe. If that sounds bleak, it is. But what if the revolution we need is already taking place; in the space between our ears and the ground beneath our feet?

Regenerative agriculture is “an underground insurgency” that is regenerating soil health. Soil health is the foundation of healthy life on this planet. This regeneration starts with new ways of seeing and thinking, which lead to new ways of managing and farming. Regenerative agriculture seeks to work with nature, to provide food and fibre while building soil, resilience, diversity, and community. It challenges farmers to go from reductionist to holistic thinking and find ways to work with nature by mimicking natural systems and generating fertility on the farm as much as possible.

Farmer wants a revolution: ‘How is this not genocide?’

I first met Vince Heffernan after I moved to Canberra in 2012. Vince has been thinking differently about agriculture for decades and had just finished the ecological agriculture degree I had enrolled in, so we had lots to talk about. He produces award-winning lamb on his farm near Dalton.

Like thousands of farmers, he has been hit hard by the drought. Times are very tough. Vince has been managing his land holistically for years now. He manages his animals to build soil health and ground cover. He and his former wife Janet planted 60,000 trees and shrubs in vegetation corridors for wildlife over the past two decades. He says: “Every farm that was once grassy woodland could easily manage 20,000 to 60,000 native trees and shrubs, without any loss in productivity.” This would vastly increase biodiversity and habitat and help with shelter from the cold winter winds that slow plant growth, make animals eat more, and cause higher infant mortality in newborn lambs. The trees help protect soil, sequester carbon, provide sheep feed (acacia leaves and seed) and work well with holistic grazing, Heffernan says.

At the start of the drought (and again as it has continued) Vince sold off stock to match his grazing ecology. These are tough decisions, but by making these decisions he aims to ensure he still has ground cover. Rain that falls gets slowed down and seeps into the land, rather than simply running over bare ground into creeks and, if it’s heavy rain, taking his topsoil with it. In this land of “drought and flooding rains”, ensuring as much rain as possible gets into the soil is critical.

I grew up on a farm a long way from Dalton, in the middle of Zimbabwe. Allan Savory, one of the earliest and most vocal people in what has become the regenerative agriculture movement, was a contentious figure in the country’s history and divided opinion among farmers, then and now. Through his experiences as an ecologist he came to develop holistic management – a way of planning and managing that goes beyond reductionist thinking and sees the farm as a complex system that needs to be managed as such, with constant monitoring of decisions to correct them if they are wrong.

Drive through the Australian landscape and it is hard to miss the bare ground and gullies that have been carrying our topsoil away since not long after European land management came to the continent. Modern Australian agriculture is founded on dispossession and genocide, and has shown very little regard for the unique history of the landscape. Changing this requires us to confront our past, and to learn from the people with ancient knowledge and culture who have been custodians of this land for millennia. There is a long history of agriculture in Australia (see Bill Gammage, Bruce Pascoe and Charles Massy) and many in the regenerative agriculture movement are beginning to respect, embrace and implement Indigenous knowledge of land management alongside the latest science and technology. Cool burning is an example – before European invasion, areas such as the one Vince now farms were maintained as open grassy woodland. When the burning stopped, they moved towards being more forests, which European farmers then cut down to make way for stock.

The former governor-general Michael Jeffery has said that “soil and water security will increasingly underpin global social stability and security”. We have lost so much topsoil and fertility that even “organic” or “sustainable” is no longer enough. All of our futures rely on starting to farm in ways that build soil and sequester carbon. And we know how to do that. Transitioning to regenerative agriculture isn’t some sort of pie-in-the-sky hoping for a utopia; it is a deeply pragmatic way to ensure the survival of our communities, country, and species, as well as the many of millions of other species we share our home planet with.

Will we challenge and transform our thinking, or continue ploughing on towards the cliff edge up ahead?

We have some of the world’s leaders in the regenerative agriculture movement here in Australia: Massy, a sheep farmer, academic and author; Colin Seis who developed pasture cropping; and Peter Andrews, who pioneered natural sequence farming. These leaders, and many others, are having an impact on farm and landscape management all over the world.

In cities, we often feel disconnected and powerless in the face of environmental issues, but buying produce from farmers who use regenerative methods is one way we can be part of the solution. As farmer, novelist and environmentalist Wendell Berry put it, “eating is a political act” – we are literally creating or destroying the world around us with the food we decide to spend our money on every day. All food is not created equal, and you and I can choose which kind of agriculture we support.

Australians are spending a smaller percentage of their income on food than in decades past, but “cheaper” food comes at a cost. Our current food system is pushing farmers to produce cheaper and cheaper food, allowing them to externalise the costs of things like loss of topsoil, land degradation, leaching of fertilisers and chemicals into waterways. As Berry goes on to remind us, “Nature is party to all our deals and decisions, and she has more votes, a longer memory, and a sterner sense of justice than we do.”

Look after the soil, save the Earth: farming in Australia’s unrelenting climate

There is no cheap food – we all pay for degraded soils and poor quality food at some point. The type of thinking that allows costs to be externalised has brought the Murray Darling ecosystem to the brink of collapse, and allowed continued investment in (even subsidising of ) fossil fuels with the knowledge of climate breakdown. Regenerative farmers work to close the loop – to generate as much fertility on the farm as possible and not externalise costs to society. They generate other benefits for all of us – like building soil health, increasing biodiversity on farms and sequestering carbon, not to mention producing healthier food.

In his book The Call of the Reed Warbler, Massy talks about how many of the farmers he interviewed had encountered tragedies of some sort – drought, fire, bankruptcy, or poisoning from chemicals that led to their shift in thinking. Yet many more farmers who encounter these same things stoically doubled down on their efforts, continuing to manage with a reductionist mindset. This is not to blame the farmers – the system they are operating within often leaves them with little choice.

As ecologist Brian Walker puts it: “Intentional transformation is not easy. Nobody likes fundamental change and one of the hardest parts of transforming is getting past the resistance to it, past the state of denial that it’s necessary. But it’s a case of the first rule of holes – when you’re in one, stop digging. Find or create something else to do. Sometimes it takes a crisis for this to happen.”

We as a nation stand at a crossroads after a summer of major crisis and upheaval – will we challenge and transform our thinking, or continue ploughing on towards the cliff edge up ahead? We get to decide. What sort of future do we want to have?