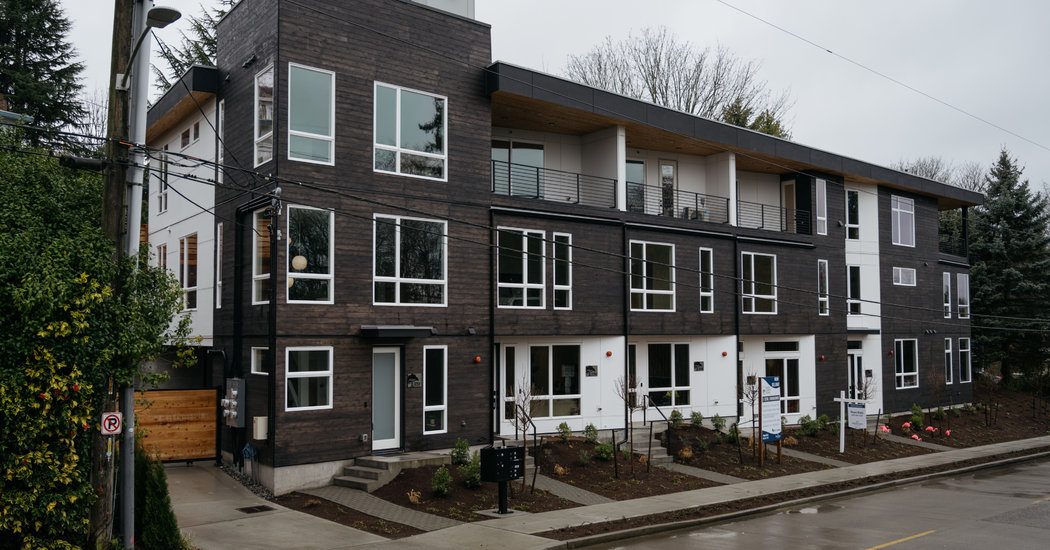 When Berkeley, Calif., became the first city in the country to ban natural gas hookups in new construction last July, no one knew the effects would ripple out so far and so fast.

The Berkeley ban was part of an effort to wean developers off buildings that consume fossil fuels, a cause of global warming, and promote cleaner electric power. And it spurred other communities in the state to enact ordinances to encourage all-electric construction.

The effort has spread to other parts of the country. The Massachusetts town of Brookline passed a prohibition on new gas connections, and municipalities near it are poised to do the same.

Now major cities, including Los Angeles, San Francisco and Seattle, are in various stages of considering pro-electric legislation as part of the “electrify everything” movement.

As interest quickly blossoms, real estate and construction industries are scrambling to keep up. Some national organizations that represent builders and developers have yet to formulate a position.

Their members are not of one mind, however. Some developers and builders are already heading down the all-electric path in an effort to meet their own goals for reducing carbon dioxide emissions, even if not legally required to do so. But others are balking at the fast rollout, saying they want to retain the option of using gas or simply believe the new rules are being put into action too quickly.

“Builders call up asking: ‘Is this legal? What are the costs? What do I have to do?’” said Robert Raymer, technical director of the California Building Industry Association, a trade group with 3,100 members.

And for residential developers, there’s the question of whether the homes they build will appeal to buyers if they are not equipped with gas stoves. In the Southeast, nearly 45 percent of homes use only electricity, according to the federal Energy Information Administration, so people there are accustomed to electric stoves. But in many parts of the country, Americans have a choice, and more of them prefer cooking with gas, according to recent data from the National Multifamily Housing Council.

“It’s a major sticking point,” said Aaron Fairchild, the chief executive of Green Canopy, which installs induction stoves, which are high-tech ranges that use magnetic waves for cooking, in the all-electric houses it builds in Seattle and Portland, Ore. Mr. Fairchild has hired chefs to do cooking demonstrations at open houses to introduce the appliances.

The emergence of legislation that bans natural gas hookups or promotes all-electric construction is not hard to understand. In the absence of a federal commitment to addressing climate change, states and local communities have adopted their own carbon goals, which often cannot be reached unless emissions decline in the building sector.

For years, natural gas has been promoted as a cleaner alternative to coal-fired electricity, and its use has surged. But carbon emissions from natural gas use have also grown.

Experts say gas must be phased out and electric power increased in development, especially now that the electric power system, known as the grid, is becoming cleaner, thanks to the addition of renewable energy such as wind and solar power.

Kate Harrison, the councilwoman who introduced the Berkeley ban, said that dozens of public officials from around the country had contacted her for advice about how to enact similar legislation.

The 22 other California cities and counties that followed Berkeley’s lead, including San Jose, the country’s 10th-largest city, have done so with building codes that encourage electric wiring and appliances rather than ban gas outright.

Brookline’s ban, which applies to new construction and gut renovations but makes some exemptions for buildings like research laboratories, awaits review by the Massachusetts attorney general before it can become law.

In nearby Cambridge, Mass., city officials have already held hearings on an ordinance that would block natural gas connections in new buildings and those being substantially renovated.

But the ordinances are facing some pushback.

The Massachusetts chapter of NAIOP, a commercial real estate association, for instance, has joined groups that represent the gas and restaurant industries in opposing the measure. Tamara Small, the organization’s chief executive, said the new legislation was premature, and she predicted that the Cambridge ban would be challenged in court if it was passed because of conflicts with state legislation.

“We’re not saying it’s not possible at some point,” she added. “But we’re moving too quickly.”

Some real estate companies, however, are already experimenting with all-electric construction, prompted by their own environmental goals or goaded by investors who “want to know what they are doing to address climate risk in their portfolios,” said Billy Grayson, executive director of the Center for Sustainability and Economic Performance at the Urban Land Institute, a real estate think tank.

“We want to reduce the carbon footprint of our portfolio,” she said, “and we recognize that, especially as the grid gets cleaner, moving toward all-electric is an impactful way to get there.”

Prominent all-electric projects are in the works:

Adobe, the software company, is erecting an 18-story all-electric office building at its headquarters in San Jose, Calif.

Alloy Development plans to break ground this summer on a 38-story all-electric mixed-use tower as part of a five-building project in Downtown Brooklyn.

And a massive development under review in Toronto was proposed by Sidewalks Labs, an Alphabet company, and Waterfront Toronto, a public agency. It will be an all-electric project, averting the need for any gas infrastructure.

“In Toronto, it makes sense to design for electricity because the grid is so green, from hydro and nuclear power,” said Charlotte Matthews, director of sustainability for Sidewalk Labs. “The trick is how to do it and not increase utility costs, and part of this is educating the market and showing that it can be done affordably.”

Members of the real estate industry are not the only ones stunned by how rapidly the all-electric movement has caught on.

Even environmentalists are surprised, said Rob Jackson, a professor at Stanford University who leads the Global Carbon Project. He said that “dozens for sure, likely hundreds” of jurisdictions would pass gas bans and pro-electric legislation this year, though lawsuits challenging them may also proliferate.

And at any rate, keeping gas out of new building construction is one thing; dealing with the 70 million structures already standing in the United States is quite another, said Bruce Nilles, director of the building electrification program at the Rocky Mountain Institute, an energy research organization.