Why Global Citizens Should Care
From geopolitical crises in Venezuela and Central America to natural disasters in Mozambique, these photos capture the global need for resilience, change, and commitment to achieving the UN Global Goals. You can join us in taking action here.

Workers around the world celebrated International Labor Day on May 1, demanding safer working environments, minimum wage hikes, unemployment benefits, provision of maternity leaves, and an end to discrimination against temporary or foreign workers.

And elsewhere in the world, people are calling for change amid political turmoil.

The crisis in Venezuela is still far from being resolved, worsening the country’s decade-long economic struggle. The two most prominent leaders, President Nicolás Maduro and opposition leader Juan Guaidó, are now calling on their supporters to rally against the other.

In Central America, migrants continue to flee to the United States in great numbers, searching for safety, protection, and opportunity. In an attempt to discourage them from approaching the border, President Donald Trump has now proposed an application fee for people seeking asylum.

This week, South Africa celebrated “Freedom Day,” a public holiday commemorating the 25th anniversary of the first elections held in the post-apartheid era in 1994, which enabled all citizens over the age of 18 to cast votes. Before these elections, anyone who was not considered “white” under the apartheid system had limited voting rights and black South Africans were not allowed to vote at all. With elections in South Africa scheduled to take place on May 8, the occasion was all the more significant.

South Africa is the continent’s most industrialized economy, yet the country still has deep inequality with black South Africans experiencing high poverty rates. The African National Congress (ANC) and President Cyril Ramaphosa — expected to win the upcoming election — have promised an ambitious house-building program for the poverty-driven population living in settlements.

Mozambique, further northeast of South Africa, was recently hit by Cyclone Kenneth, just weeks after Cyclone Idai killed hundreds of people and caused major destruction. The UN said that more floods due to heavy rainfalls are expected and could cause the distressed country more damage.

India, which began its elections, is now entering the fourth round of the phased process. The election is said to be the largest democratic exercise in the world, with more than 900 million registered voters.

These are some of the most remarkable images from around the world this week. 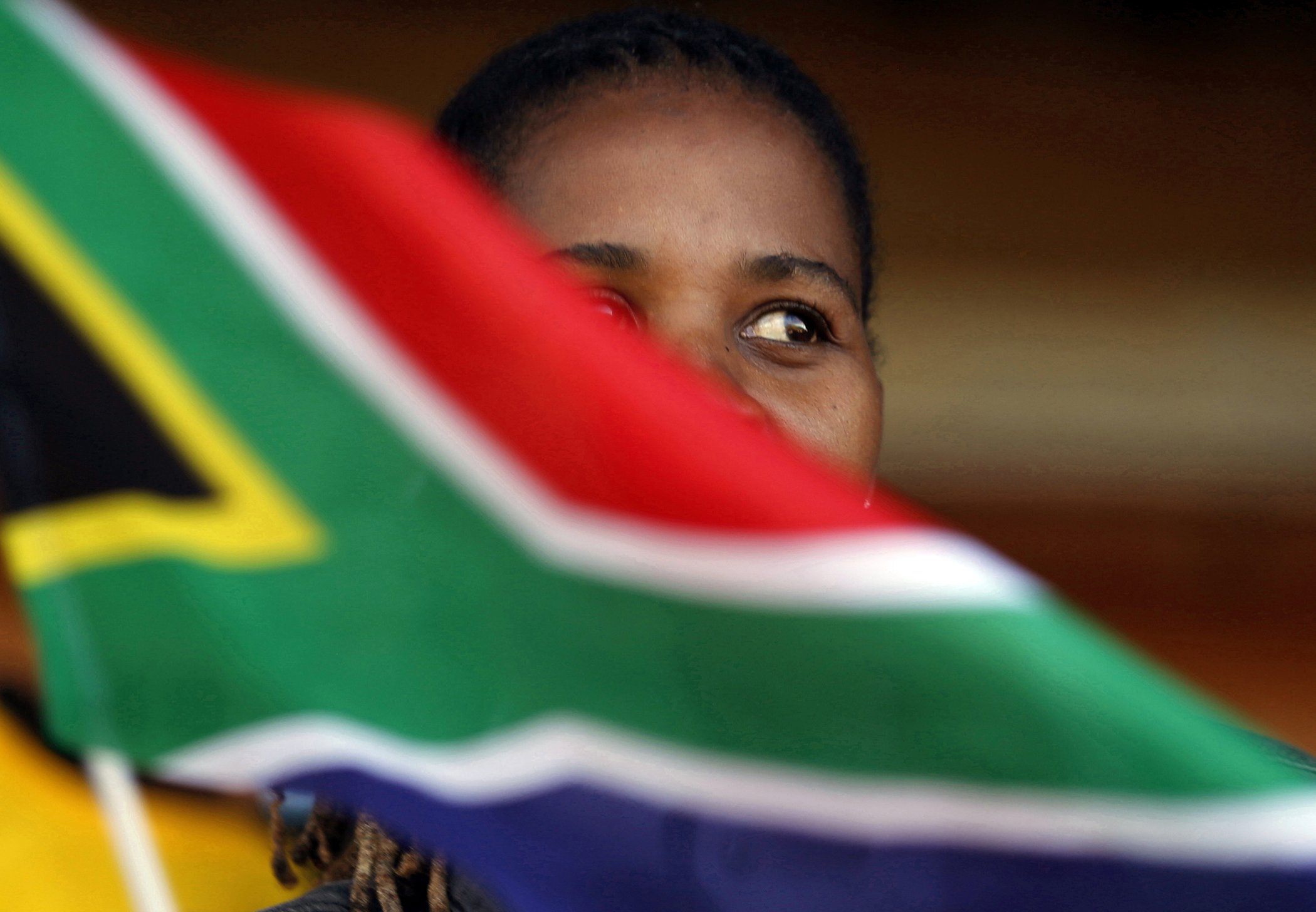 1. South Africa Freedom Day: A woman waves a South African flag as she attends Freedom Day celebrations in Kwa-Thema Township, near Johannesburg, on April 27, 2019. Sporting colorful outfits, South Africans celebrate Freedom Day, the holiday marking the 25th anniversary of the 1994 elections, which ended of the brutal system of racial discrimination known as apartheid and established a new democratic government. This year, much attention was focused on the upcoming elections in South Africa, which will take place on May 8. According to the Guardian, almost 50 parties will compete for the votes of 26.75 million eligible voters. While the African National Congress (ANC) and President Cyril Ramaphosa are expected to win another majority, how the ANC performs in the polls could dictate the future direction of the party and country. 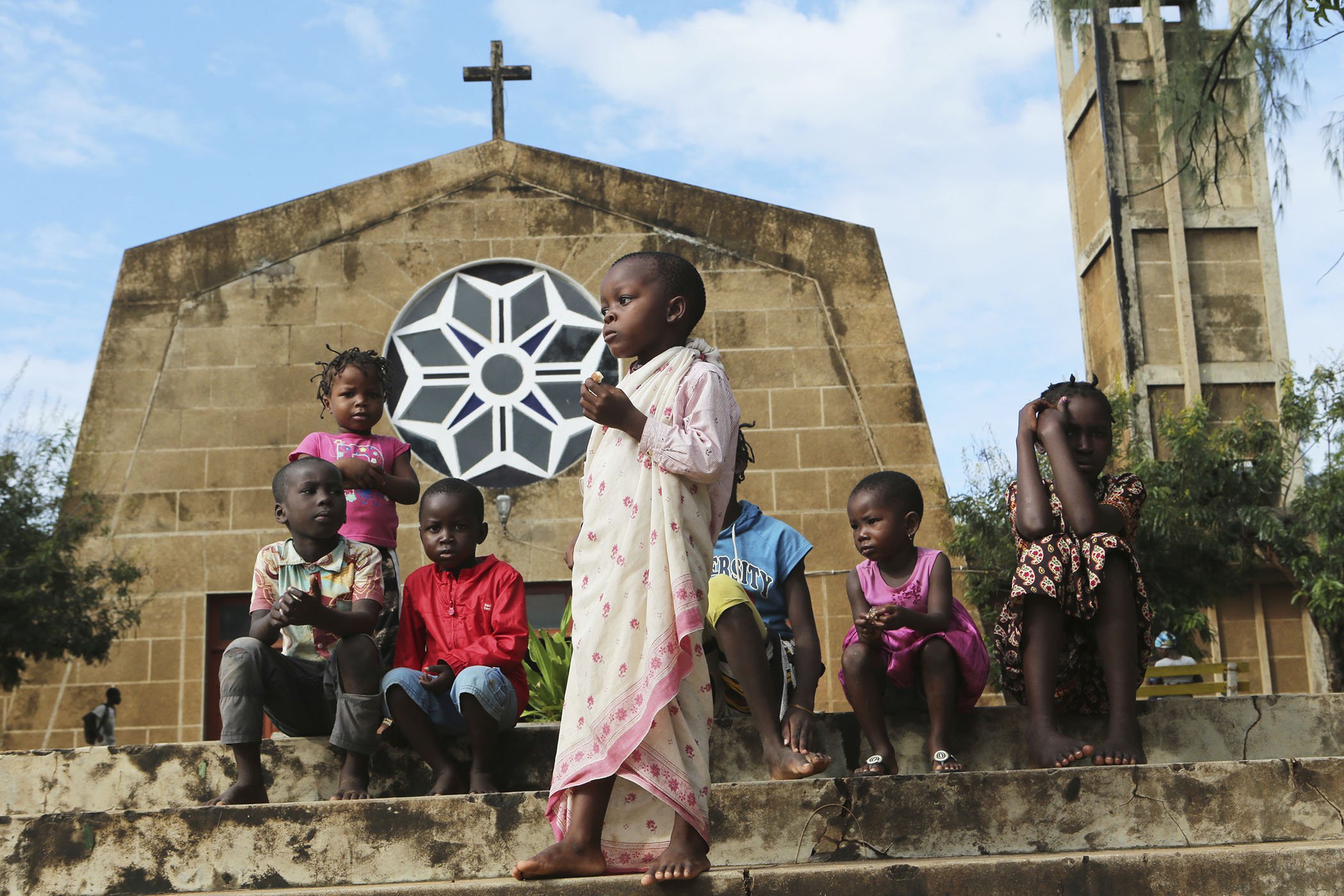 2. Mozambique: Children relax outside a Roman Catholic Church in Pemba city on the northeastern coast of Mozambique on April, 29, 2019. Situated in the heart of this predominantly Muslim but diverse city ravaged by Cyclone Kenneth, the Maria Auxiliadora parish has become a home for nearly 1,000 people displaced by the storm in Cabo Delgado, Mozambique’s northernmost province. At least 38 people have been killed by Cyclone Kenneth, the second massive storm to strike Mozambique in a matter of weeks. The country is still recovering from Cyclone Idai, which killed hundreds of people and displaced millions just six weeks ago. Humanitarian organizations fear that Cyclone Kenneth could deepen the ongoing crisis. “It will be challenging for the humanitarian community to respond, simultaneously, to what are the two worst storms that have hit the southern hemisphere in a five-year period,” Chance Briggs, country director of Mozambique for Save the Children, told Global Citizen from the port city of Berai, which was flattened by Cyclone Idai.

3. Venezuela Migration Crisis: A woman and her children cross from San Antonio del Tachira, in Venezuela, to Cucuta, in Colombia, through “trochas” — illegal trails — near the Simon Bolivar International Bridge, on May 1, 2019.

4. Sri Lanka Aftermath: Mourners light candles during a vigil in memory of the victims in Colombo on April 28, 2019, a week after the series of bomb blasts targeting churches and luxury hotels on Easter Sunday in Sri Lanka. Sri Lanka’s churches remained shut on April 28, forcing Christians to say prayers of grief in private over the Easter suicide attacks. 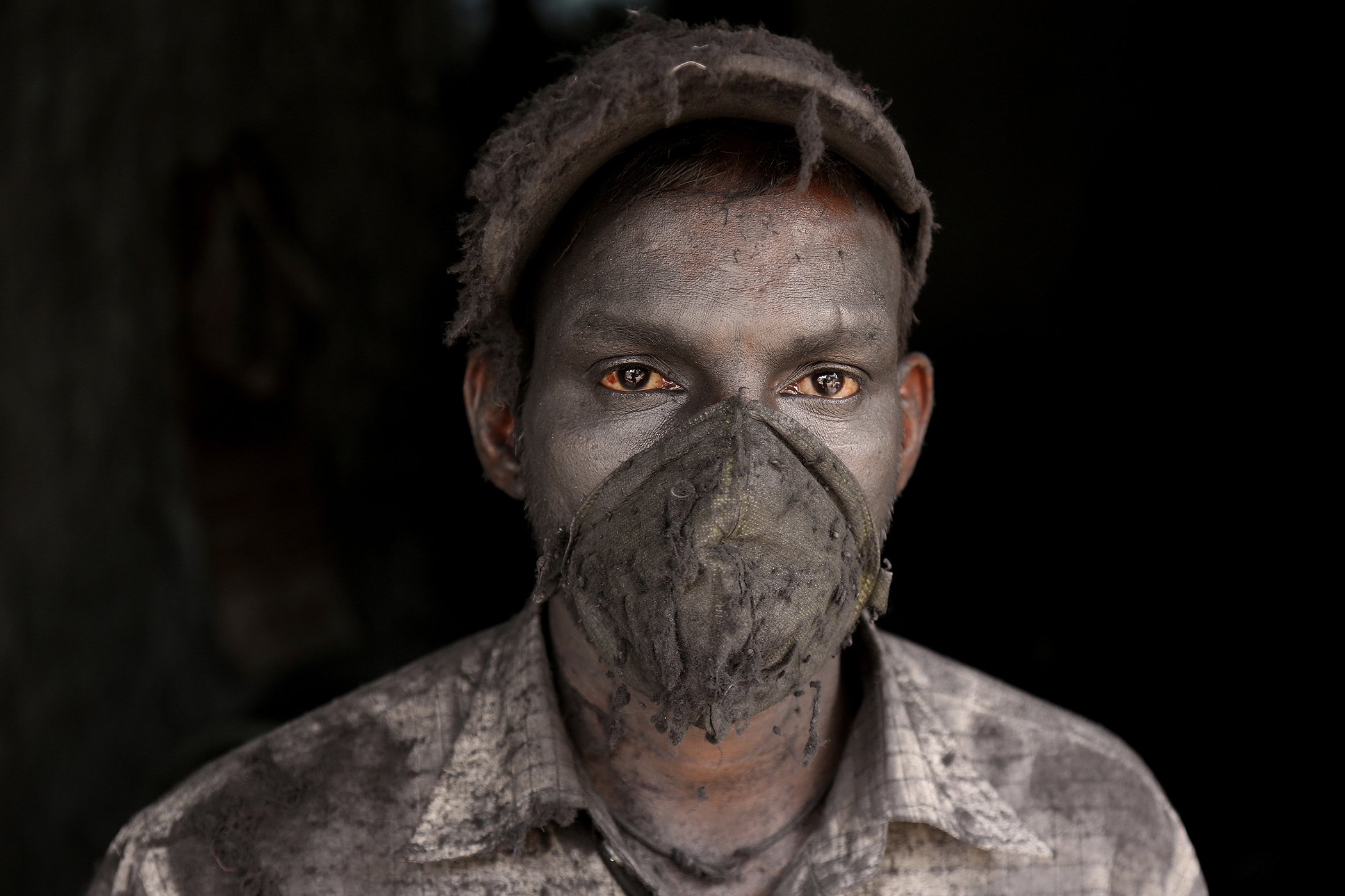 5. Labor Day in India: An Indian worker wears a worn-out protection mask as he works in a small aluminum factory in Hyderabad, India, April 30, 2019. International Labor Day, also known as May Day, is marked across the world on May 1. Traditionally, May Day marks the day when union members and labor activists march for workers rights globally. According to the Associated Press, higher salaries, better working conditions, maternity leave, minimum wage, and an end to discrimination against temporary or foreign workers were among the concerns most important to marchers this year. In India, a country with an estimated 522 million workers, Labor Day is a public holiday. 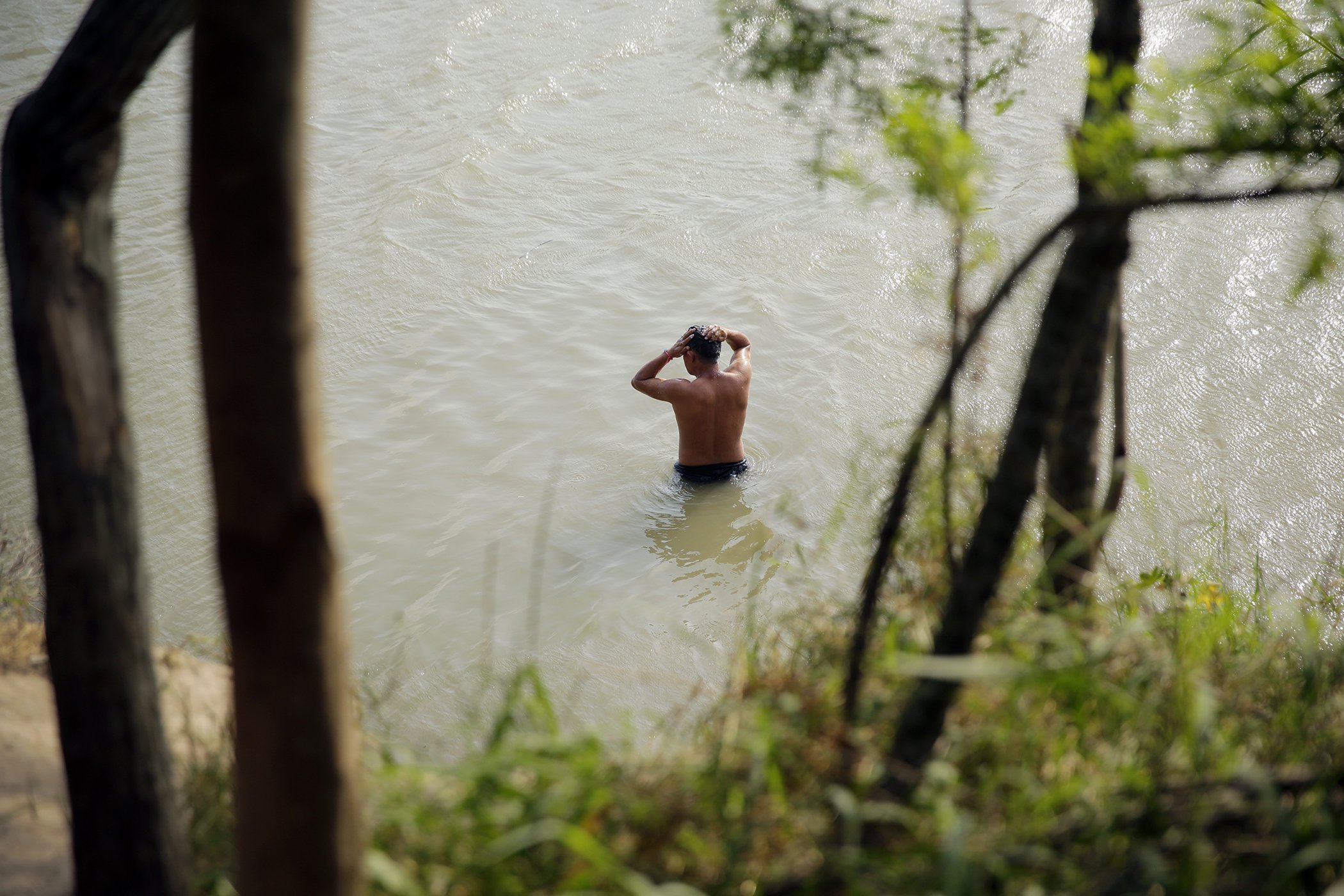 6. Central American Migration: A migrant seeking asylum in the United States bathes in the Rio Grande River near the international bridge in Matamoros, Mexico, on April 30, 2019. President Donald Trump has proposed charging asylum seekers a fee to process their applications, as he continues to try to crack down on the surge of Central American migrants seeking to cross into the US. Migrants fleeing Central America’s Northern Triangle region — comprising Honduras, El Salvador, and Guatemala — routinely cite poverty and rampant gang violence as their motivations for leaving. 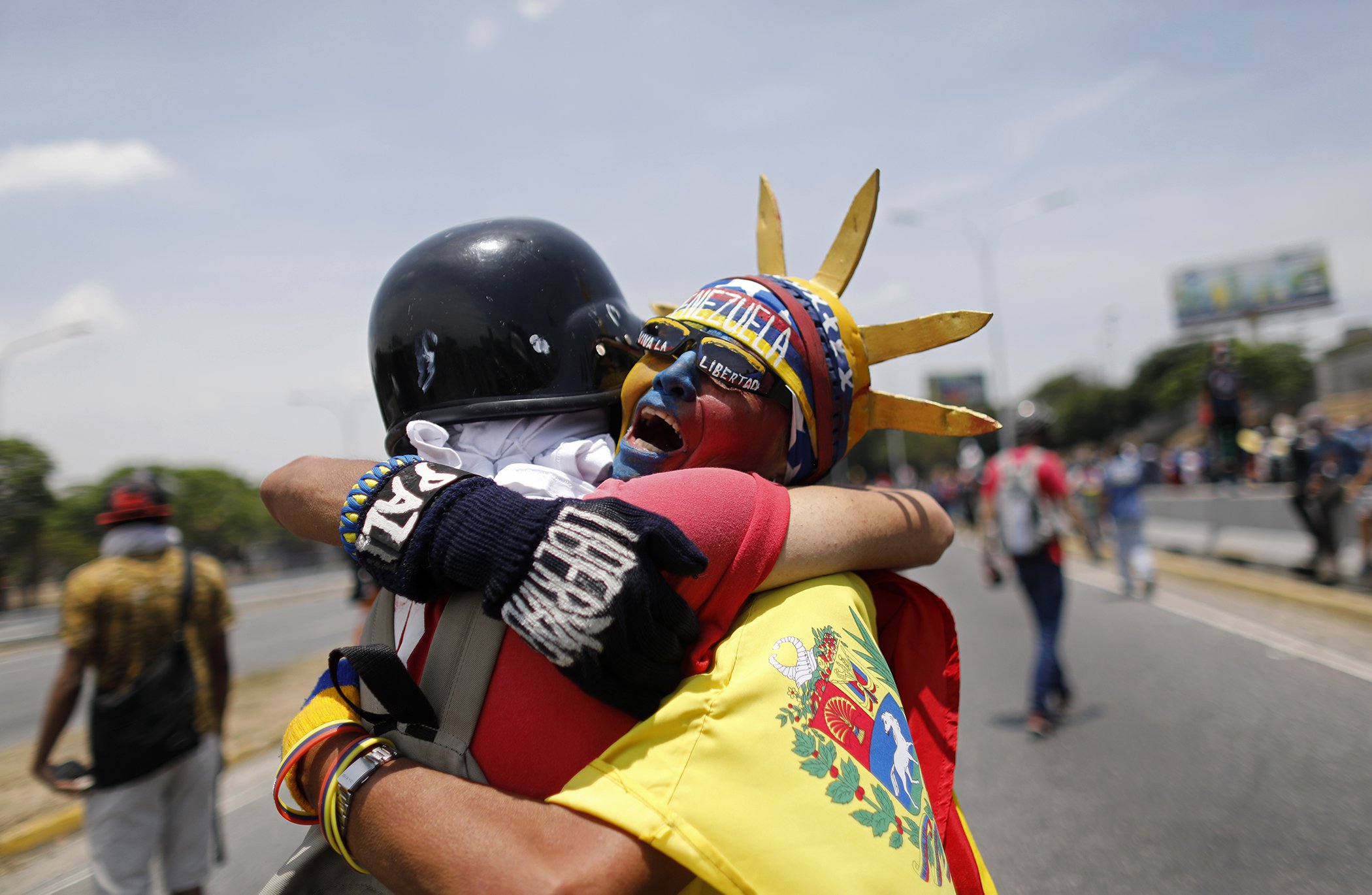 7. Political Crisis in Venezuela: An anti-government protester dressed as Lady Liberty, wearing the colors of Venezuela’s flag, hugs a fellow protester during a demonstration near La Carlota airbase in Caracas, Venezuela, on May 1, 2019. Opposition leader Juan Guaidó is called for Venezuelans to fill streets around the country to demand President Nicolás Maduro’s ouster. Maduro also called for his supporters to rally. Amid this geopolitical turmoil, the country’s humanitarian crisis, which began nearly a decade ago, continues to deteriorate. The crisis in Venezuela has steadily grown over the past few years, following the collapse of the country’s economy, widespread food insecurity, a faltering health care system, and violence.

8. South Africa Elections: A street scene shows a woman and child crossing a road flanked by South African political party posters in the run up to elections on April 28, 2019, in Johannesburg. The elections, due to take place on May 8, will mark the 25th anniversary of democratic rule in the country.

9. May Day in Hong Kong: Workers carry placards and banners as they march on the street during the Labor Day rally on May 1, 2019, in Hong Kong, China. Hundreds gathered in Hong Kong on Labor Day to demand better workers’ rights. 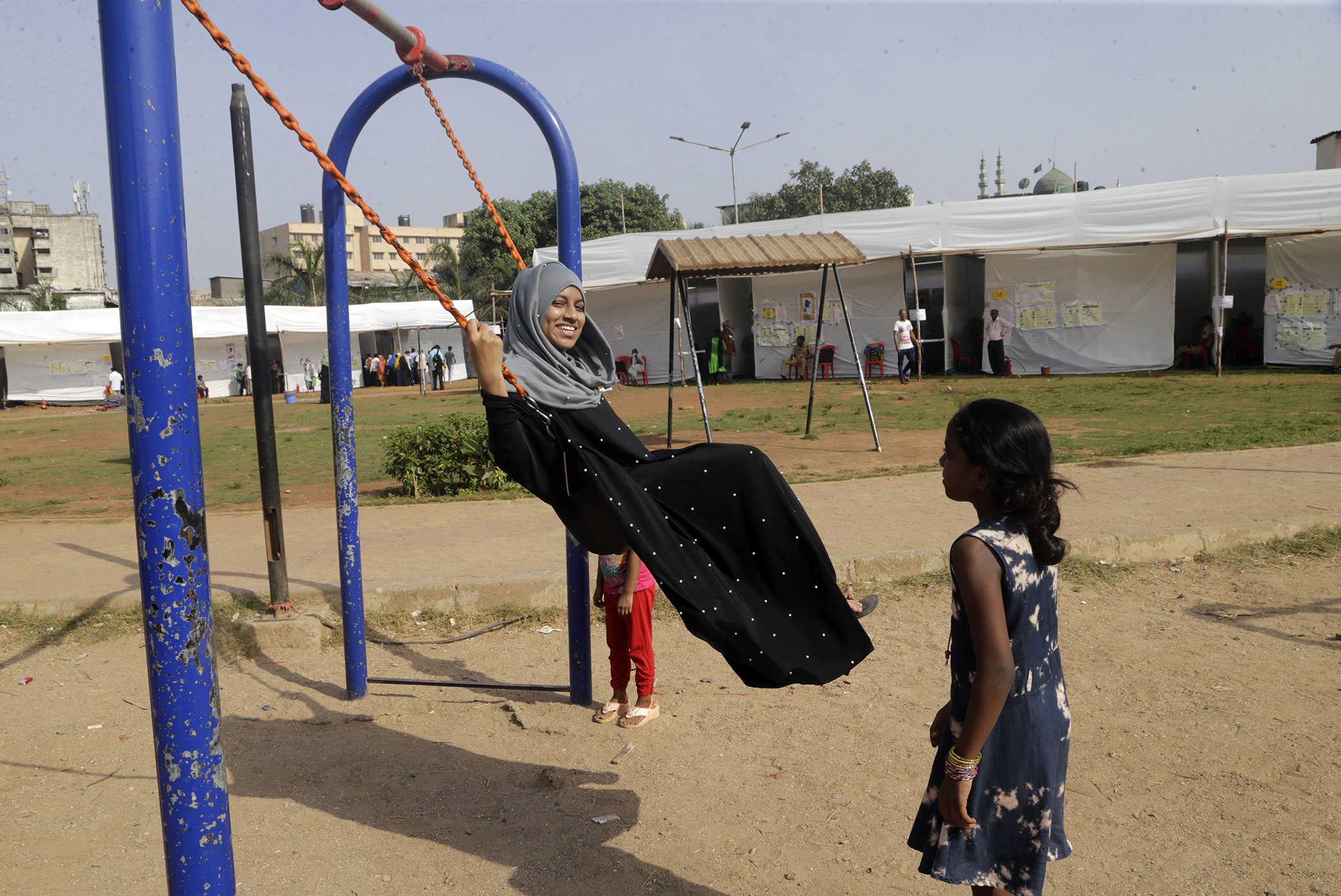 10. Election in India: An Indian Muslim woman enjoys a swing outside a polling booth after casting her vote in Mumbai, India, on April 29, 2019. Indians voted on Monday in the fourth phase of a staggered national election. The election, the world’s largest democratic exercise, is seen as a referendum on Prime Minister Narendra Modi and his Bharatiya Janata Party. The scale of the general elections in India is the largest in the world, with more than 1 million polling booths being set up all over the country, according to Vox. The process ends on May 19.

11. Sudan: A Sudanese protester raises a placard during a sit-in outside the army headquarters in the capital, Khartoum, on April 29, 2019. Sudan’s army rulers and protest leaders have offered different visions for a joint council, a military spokesman said today, expressing hope that a final structure for the body would be decided soon.

12. Conservation in Indonesia: An Indonesian elephant receives a bath in the conservation area of the Ulu Masen ecosystem in Aceh province, Indonesia, on April 27, 2019. Sumatran elephants are a critically endangered species and face threats from poaching and rampant deforestation.

13. Protests Against Thermal Coal Mine in Australia: Reinhard of the Wangan and Jagalingou people prepares to perform with other traditional land owners during an anti-Adani rally at Clermont Showground on April 28, 2019, in Clermont, Australia. The proposed Adani Carmichael Mine, if approved, will be constructed in the North Galilee Basin, 160 kilometers northwest of the town of Clermont. Its first stage is estimated to produce 27.5 million tonnes of coal per annum and will be transported via rail to Abbot Point which is situated 25 kilometers north of Bowen. Former Greens leader and conservationist Bob Brown has been leading a convoy of environmental activists through the Southern States toward Central Queensland as part of the #StopAdani movement.

14. Cylone Kenneth: Parents Maria Mendosa and Assan Madal, with their children, cook a meal next to their totally destroyed home in the village of Nacate, south of Macomia, on April 27, 2019, after Cyclone Kenneth hit the area. Heavy rains from a powerful cyclone lashed northern Mozambique on April 27, 2019, sparking fears of flooding as aid workers arrived to assess the damage, just weeks after the country suffered one of the worst storms in its history.

15. Elections in India: An Indian Muslim woman displays her ink-marked finger after casting her vote during the fourth phase of general elections at a polling station in Kendrapada district of Odisha state on April 29, 2019. Voting began for the fourth phase of India’s general parliamentary elections as Indians exercise their franchise in the country’s marathon election, which started on April 11 and runs through to May 19 with the results to be declared on May 23.