Why Global Citizens Should Care
These stunning photos of daily life, religious observance, and strife highlight the urgent need to establish and protect equal rights for all people. From Syria to Somalia, people continue to struggle to have their basic needs met due to conflict, disaster, and political hardships, and these images show exactly why commitment to achieving the UN Global Goals is needed now more than ever. You can join the movement to end poverty by taking action here.

Millions of Muslims around the globe continue to fast, pray, give to charity, and make pilgrimages to Mecca as part of the holy month of Ramadan. This week they were joined in acts of religious observance by Buddhists who celebrated Vesak Day, sometimes referred to as the “Buddha’s Birthday.” Buddhist followers released lanterns into the sky, maintained a vegetarian diet, and meditated in honor of the occasion.

But in many other parts of the world, people demonstrated their faith in a different kind of system — democracy — casting votes in elections in Malawi and India. As election results are determined in India, the country is poised to welcome a record-breaking number of women as representatives in its lower house of parliament — a win for women’s representation.

In both India and Puerto Rico, women in sports made headlines this week, with sprinter Dutee Chand publicly coming out as the former’s first openly gay athlete and baseball player Diamilette Quiles making history in the latter as the first woman in the US territory to play in an all-male league.

Despite these inspiring and uplifting events, the world also saw continued struggle and devastation this week.

Students in Honduras clashed with police during a protest over proposed legislation that would lead to mass layoffs in the public education and health sectors. And in Somalia, South Sudan, and Palestine — where conflicts are ongoing — families struggle to find safety, earn income, and access sufficient food.

These striking images capture moments of celebration and chaos from around the world this week. 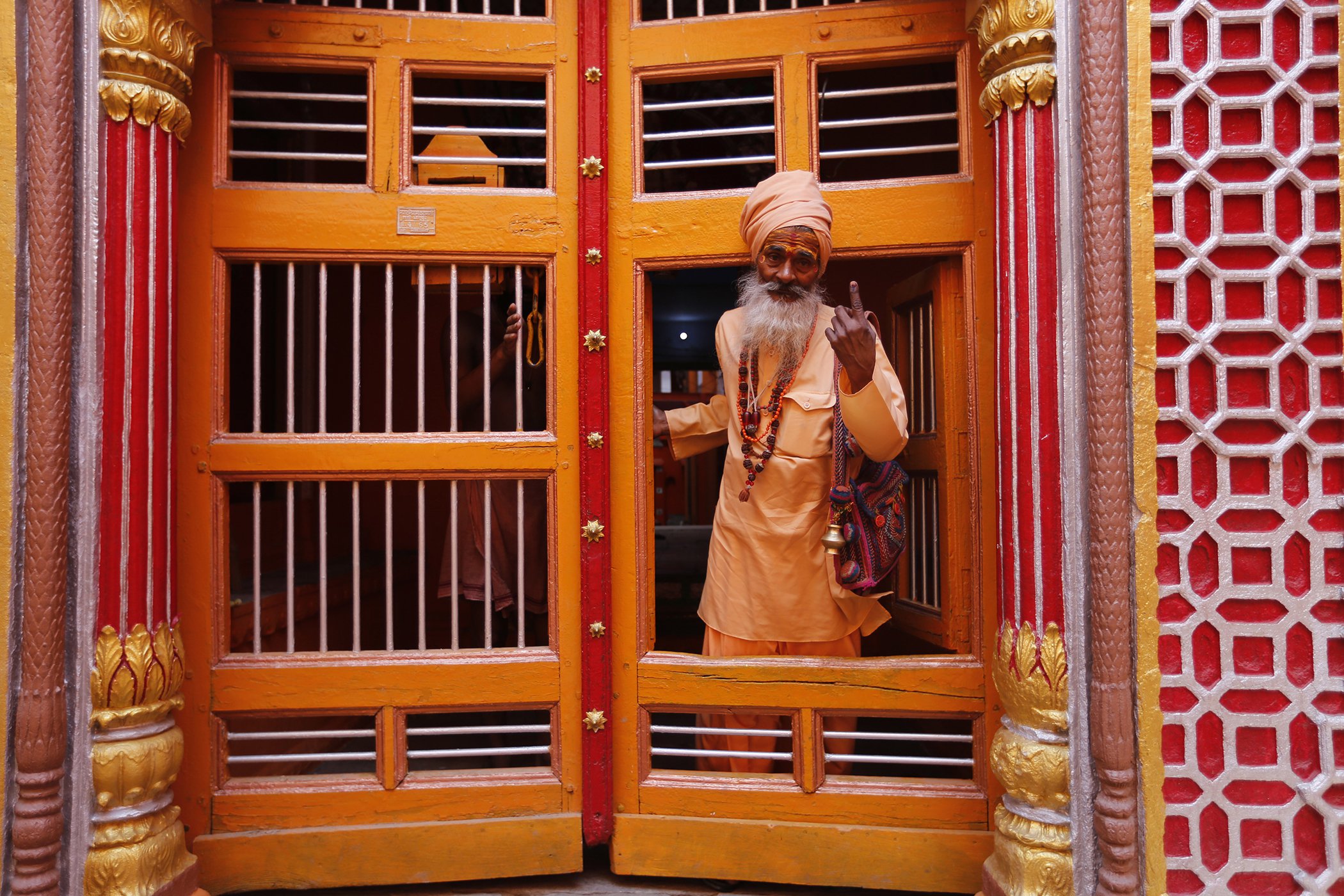 1. India Elections: A Hindu holy man displays the indelible ink mark on his finger after casting his vote in Varanasi, India, on May 19, 2019. Indians were voting in the seventh and final phase of national elections, wrapping up a grueling six-week-long campaign season with Prime Minister Narendra Modi’s Hindu nationalist party seeking re-election for another five years. According to the Associated Press, Modi’s party claimed it won re-election with a commanding lead in Thursday’s vote count. 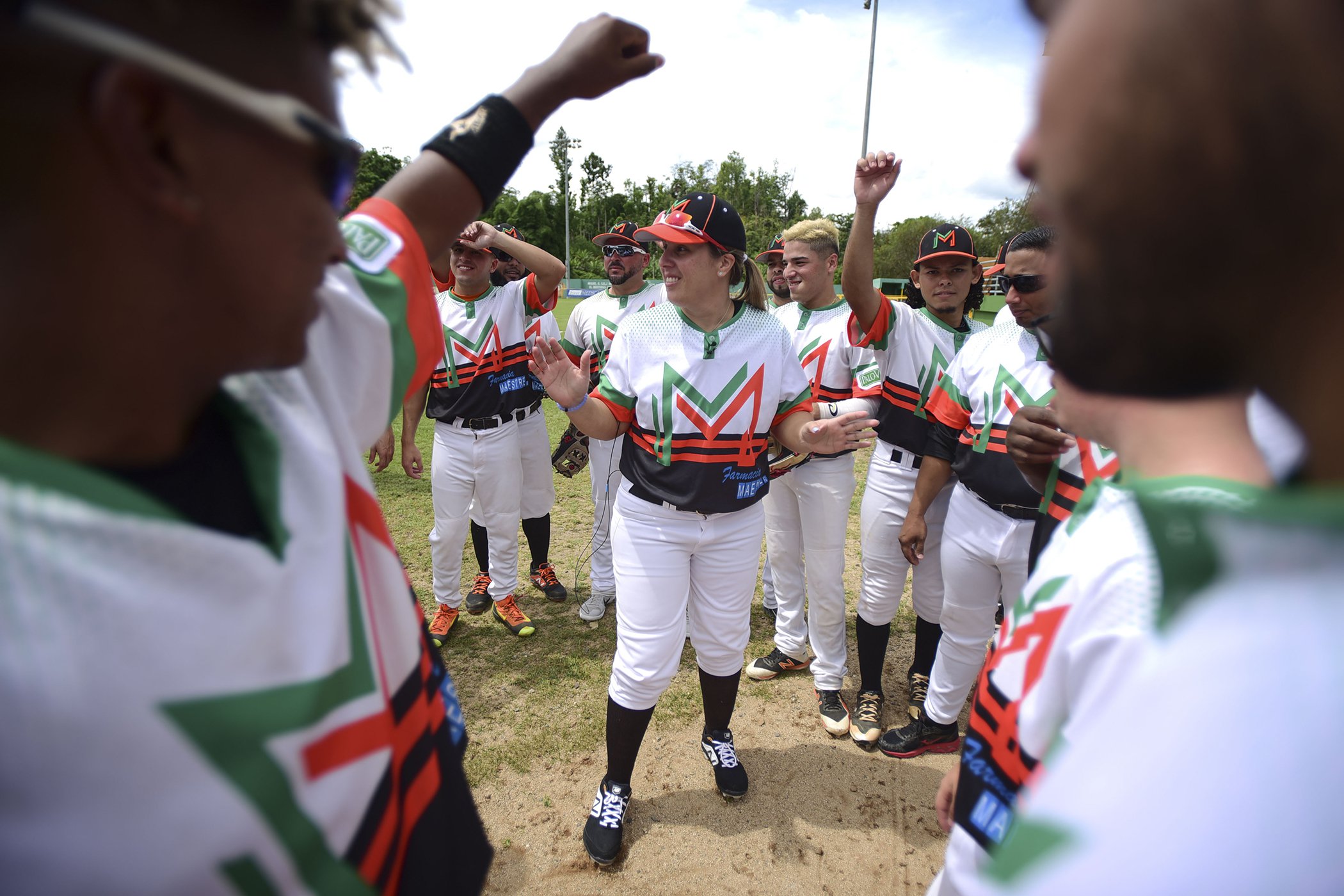 2.  History in Puerto Rico: Diamilette Quiles, center, is welcomed by her teammates from the Mountaineers of Utuado baseball team moments before their game against the Patrulleros de San Sebastian at Ramon Cabanas Stadium in Utuado, Puerto Rico, on May 19, 2019. Quiles, who joined the team days ago, is the first woman in Puerto Rico’s history to play in an otherwise all-male baseball tournament organized by a popular semi-pro league.

3. Ramadan: A Kashmiri Muslim man reads the Koran at the Sheikh Abdul Qadir Geelani Shrine during the holy month of Ramadan in Srinagar, India, on May 20, 2019. Muslims around the world abstain from eating, drinking, and sex from sunrise to sunset during Ramadan, the holiest month in the Islamic calendar.

4. Buddha’s Birthday: Buddhist followers and tourists release lanterns into the air at Borobudur temple during celebrations for Vesak Day on May 19, 2019 in Magelang, Central Java, Indonesia. Buddhists in Indonesia celebrate Vesak at the Borobudur temple annually, which makes it the most visited tourist attraction in Indonesia. Vesak Day is observed during the full moon in May or June, with the ceremony taking place at three Buddhist temples, by walking from Mendut to Pawon and ending at Borobudur. The stages of life of Buddhism’s founder, Gautama Buddha, which are celebrated on Vesak are his birth, his enlightenment to Nirvana, and his passing (Parinirvana). 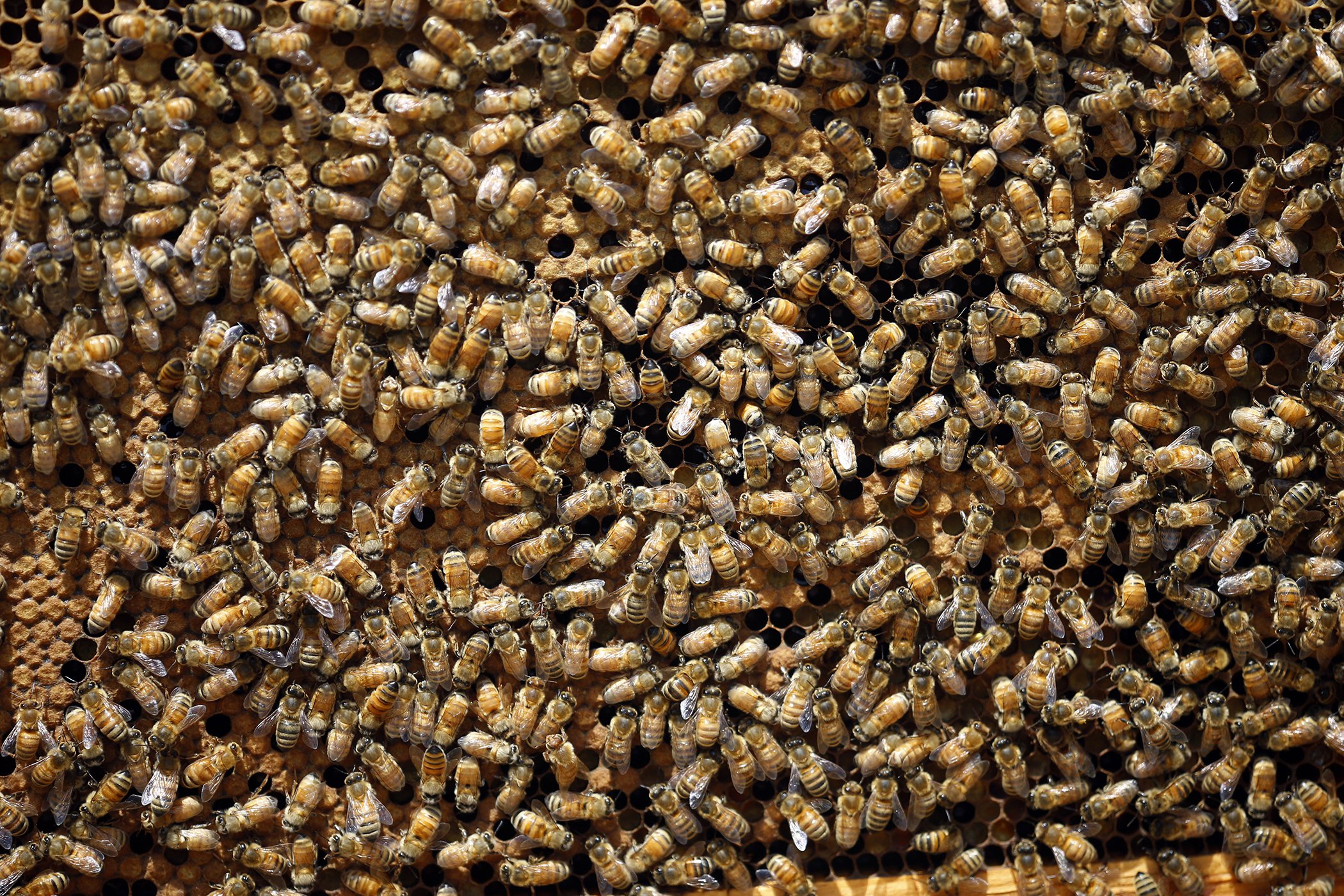 5. International Bee Day: Honeybees are shown on a frame at beekeeper Denise Hunsaker’s apiary, on May 20, 2019, in Salt Lake City, Utah. According to the United Nations, bees and other pollinators play a vital part in the ecosystem by carrying pollen from one plant to another, allowing many plants, including food crops, to reproduce. This contributes directly to food production, food security, and biodiversity. However, bees are increasingly under threat from human activities. According to Food and Agriculture Organization of the UN, the most popular pollinators are bees, and there are between 25,000 to 30,000 species. To raise awareness about the importance of bees, the pollinators, and the threats they face, the UN designated May 20 as World Bee Day.

6. Voting in Malawi: People queue in the early morning at Masasa Primary School polling station in Mzuzu, Malawi, on May 21, 2019. 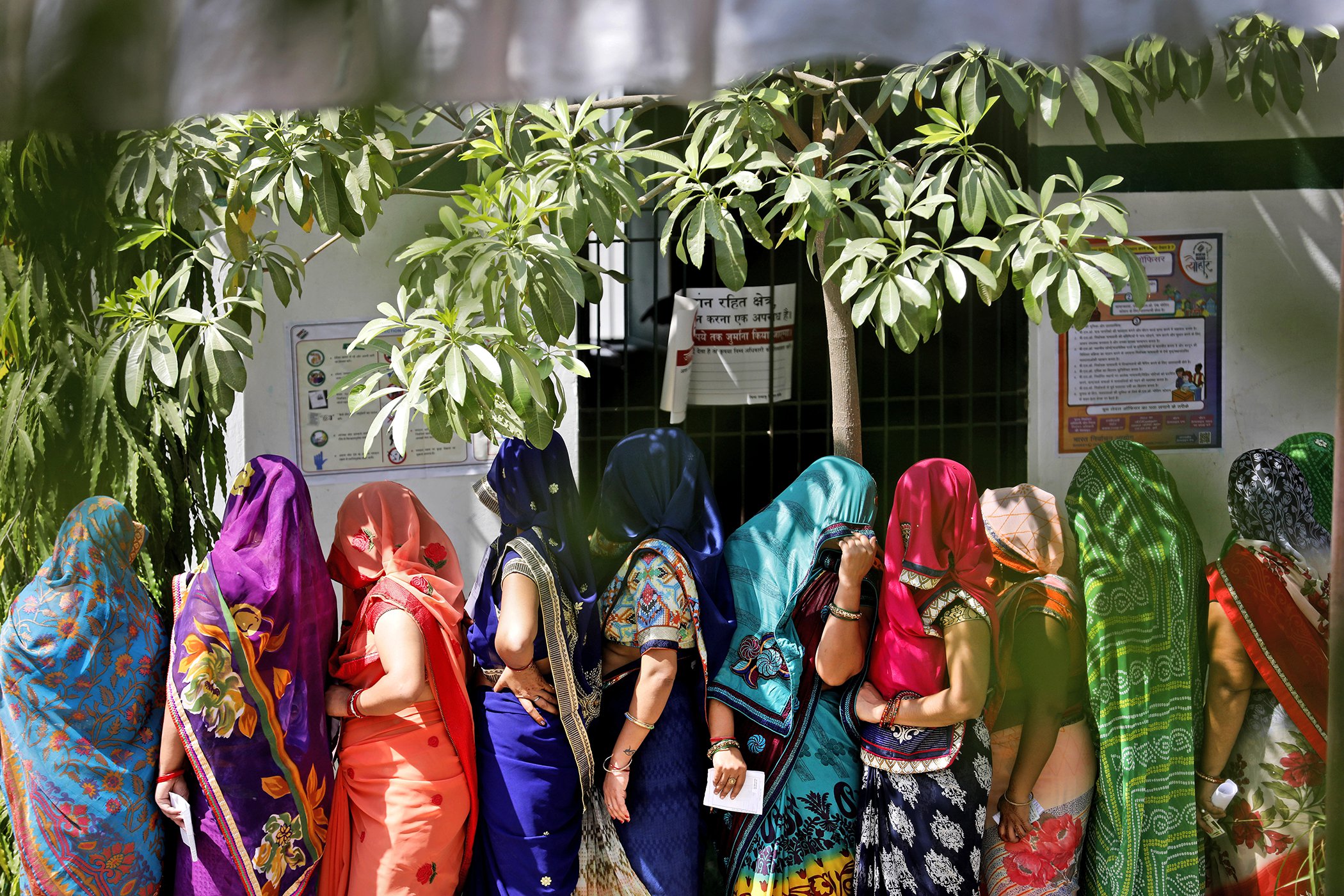 8. Gaza Daily Life: Palestinian children help their father sort through arugula produce before he goes to sell it at a market, in an impoverished area in Beit Lahia in the northern Gaza Strip on May 22, 2019.

9. South Sudanese Refugees: Young South Sudanese refugees are transported from the border of South Sudan and the Democratic Republic of the Congo (DRC) to a refugee settlement site on May 10, 2019, in Aru, DRC. A recent increase in fighting between South Sudanese government forces and rebel groups along the South Sudan and DRC border has cause thousands to seek refuge in DRC since the beginning of the year.

10. Banksy: A work, allegedly by British street artist Banksy, depicting a migrant child wearing a lifejacket holding a pink flare, is painted on the outer wall of a house overlooking the canal Rio de Ca Foscari in Venice, Italy, on May 21, 2019.

11. India Water: An Indian youth scouts around for mud crabs and snakehead fish as he walks on the parched bed of Chembarambakkam Lake on the outskirts of Chennai, India, on May 21, 2019. Water levels in the four main reservoirs in Chennai have fallen to some of their lowest levels in 70 years, according to Indian media reports, with the current levels amounting to only 1.3% of full capacity. 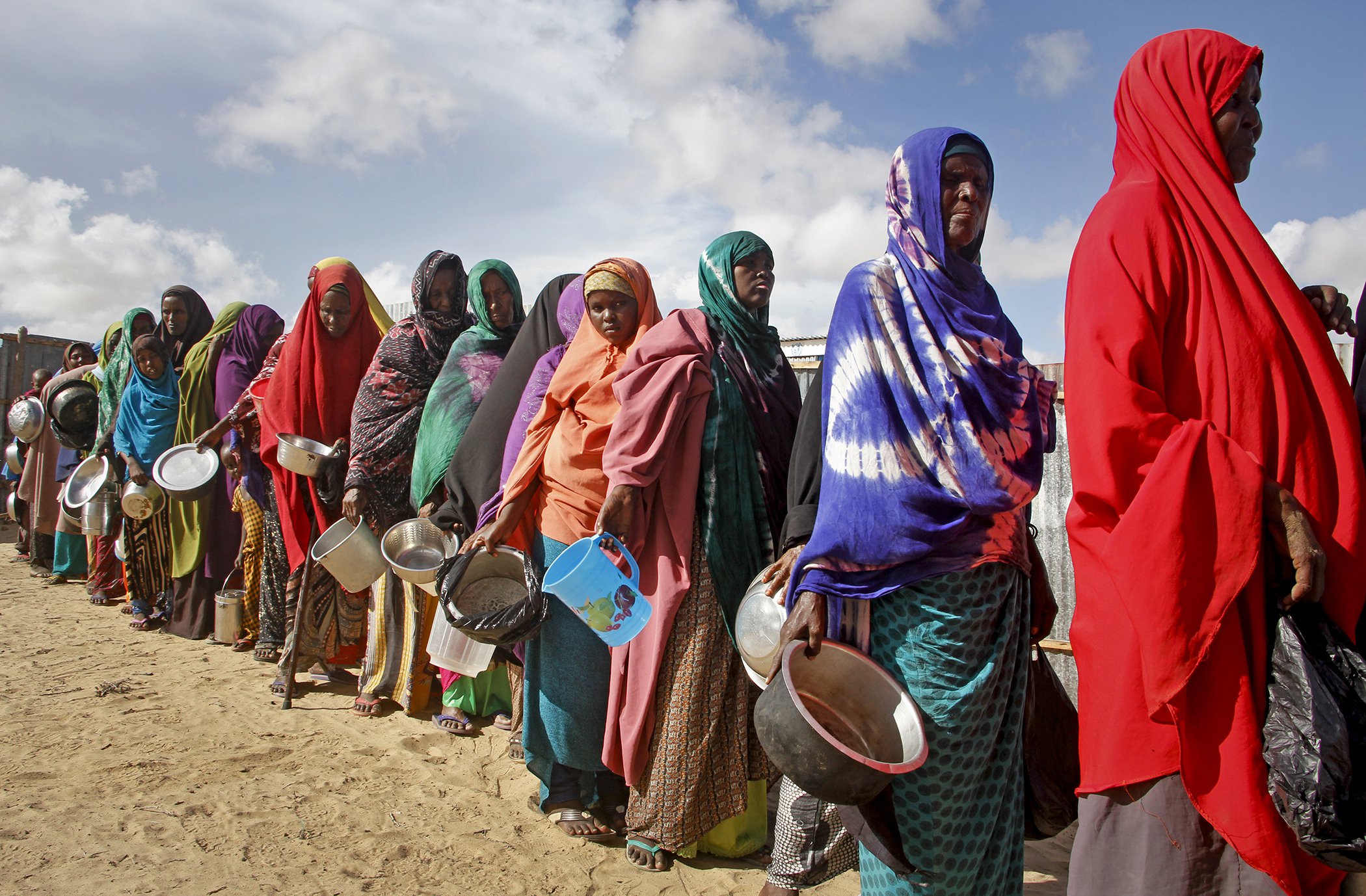 12. Drought in Somalia: Newly arrived women who fled drought queue to receive food distributed by local volunteers at a camp for displaced persons in the Daynile neighborhood on the outskirts of Somalia’s capital, Mogadishu, on May 18, 2019. The UN’s Food and Agriculture Organization (FAO) issued a warning this week projecting that some 2.2 million people in Somalia will face “severe hunger” in the coming months, due to worsening drought conditions severely affecting crop and livestock production.

13. Protests in Honduras: High school and National Institute of Professional Training (INFOP) students clash with riot police during a protest against Honduran President Juan Orlando Hernandez in the area surrounding the Congress building in Tegucigalpa, on May 22, 2019.

14. Mexico Air Quality: A group of students wear face masks during a ceremony at Zocalo Square in Mexico City, Mexico, on May 17, 2019. A thick layer of smog enveloping Mexico City, resulted in an air pollution alert urging people to stay indoors, canceling school lessons and moving the semi-finals of the first-division football league to another city.