Farmer Talita Matutu twists open an under-sized maize cob in a field she stopped tending after no rain came for months and most of her crop wilted.

“If the rains were normal, I would be harvesting a bigger cob with fat grains,” she told the Thomson Reuters Foundation.

“As you can see, the small cobs are not mature and when you cook them they will be hard to eat.”

Many small-scale farmers across large swathes of Zimbabwe are suffering a failed harvest this year due to a drought linked to the climate pattern El Nino, which followed two years of good rainy seasons. The east was recently flooded after a cyclone.

Farmers like Matutu, 54, who have traditionally relied on rain to water their maize crop are experimenting with vegetable-growing and more effective drip irrigation to bolster yields and incomes hit by drought.

This type of irrigation, which delivers small amounts of water directly to plant roots, comes under an approach known as “climate-smart agriculture” (CSA), promoted by some scientists as a way to adapt farming methods on a warming planet.

Matutu grows maize — and now vegetables — on a five-hectare plot, half of which is arable.

She is now putting it in for her maize crop too, although too late to rescue this season’s harvest.

Some small-scale farmers in Zimbabwe’s arid Matabeleland Province have adopted CSA technologies, which include more resilient seeds, as well as methods to save water and enhance soil nutrients, such as mulching and zero tillage.

But climate-smart techniques are still not working for many others because of a lack of supportive policies, extension advice, awareness and investment, they say.

“It is too hot, so the crops wilted as if they had a disease and I gave up on tending even though I had used improved seed and practiced conservation agriculture,” Matutu said on her farm in Rangemore on the outskirts of the city of Bulawayo.

Conservation agriculture includes practices like minimizing disturbance to the soil and rotating crops, to enhance fertility, prevent soil erosion, and ward off disease.

Its proponents, which include the UN Food and Agriculture Organization, say it can help farmers increase yields and incomes while adapting to more extreme and unpredictable weather linked to climate change. 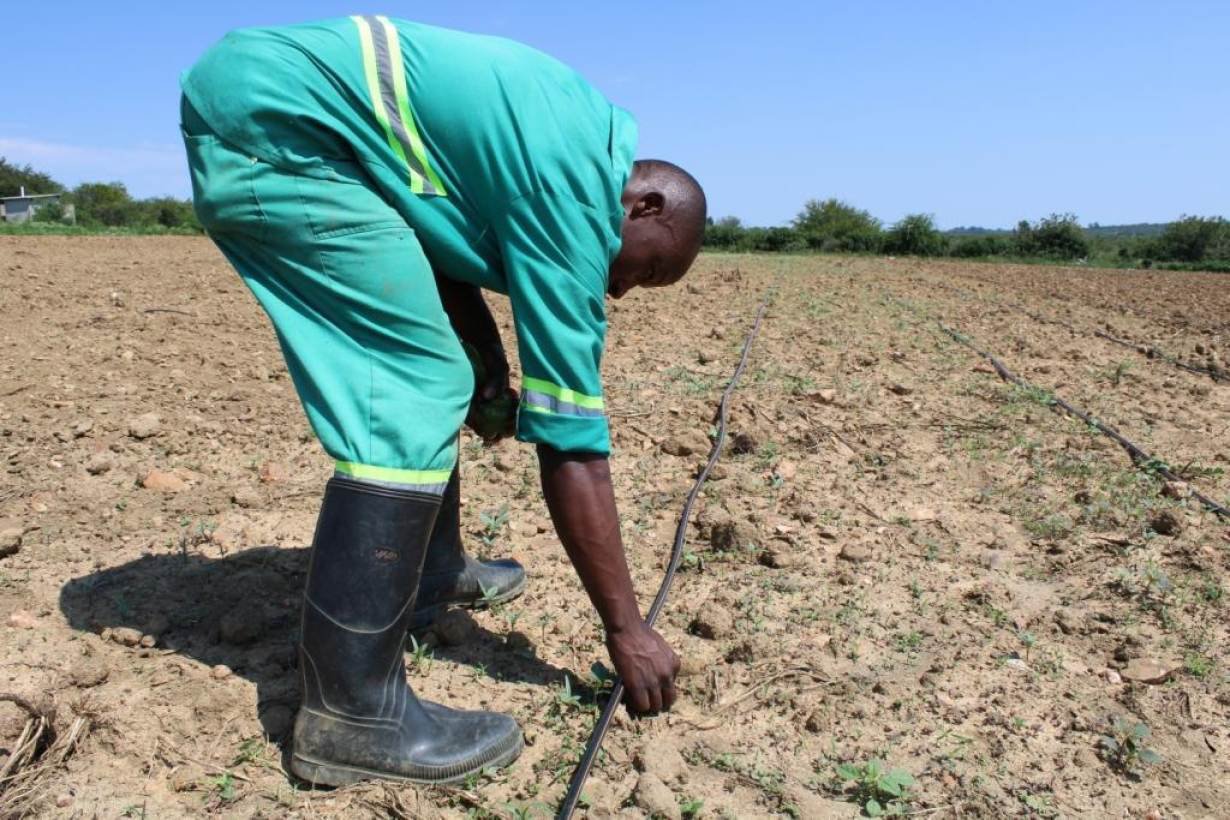 Veg to the Rescue

In late February, the United Nations and Zimbabwe’s government launched a $234-million appeal to help 2.2 million of the nearly 5.3 million Zimbabweans who will need humanitarian assistance until June due to poor rains and an economic crisis.

The government, which has announced plans to slash the civil service under cost-cutting measures, has limited resources to deploy extension staff to promote climate-resilient agriculture.

By adopting climate-smart methods, Chikwara — who has also diversified into rearing small animals and free-range chickens, as well as mushroom farming — said he had improved the quality of his crop, fetching high prices at the market.

Drip irrigation is not labor-intensive, he noted.

“We just install the system and open our tap,” he said, adding that his yields for green pepper increased from 3 kg (6.6 lb) per plant to 7 kg.

But many farmers cannot access finance to buy equipment like drip kits and tractors, nor do they have broadband internet to access timely information on the weather, said Chikwara. 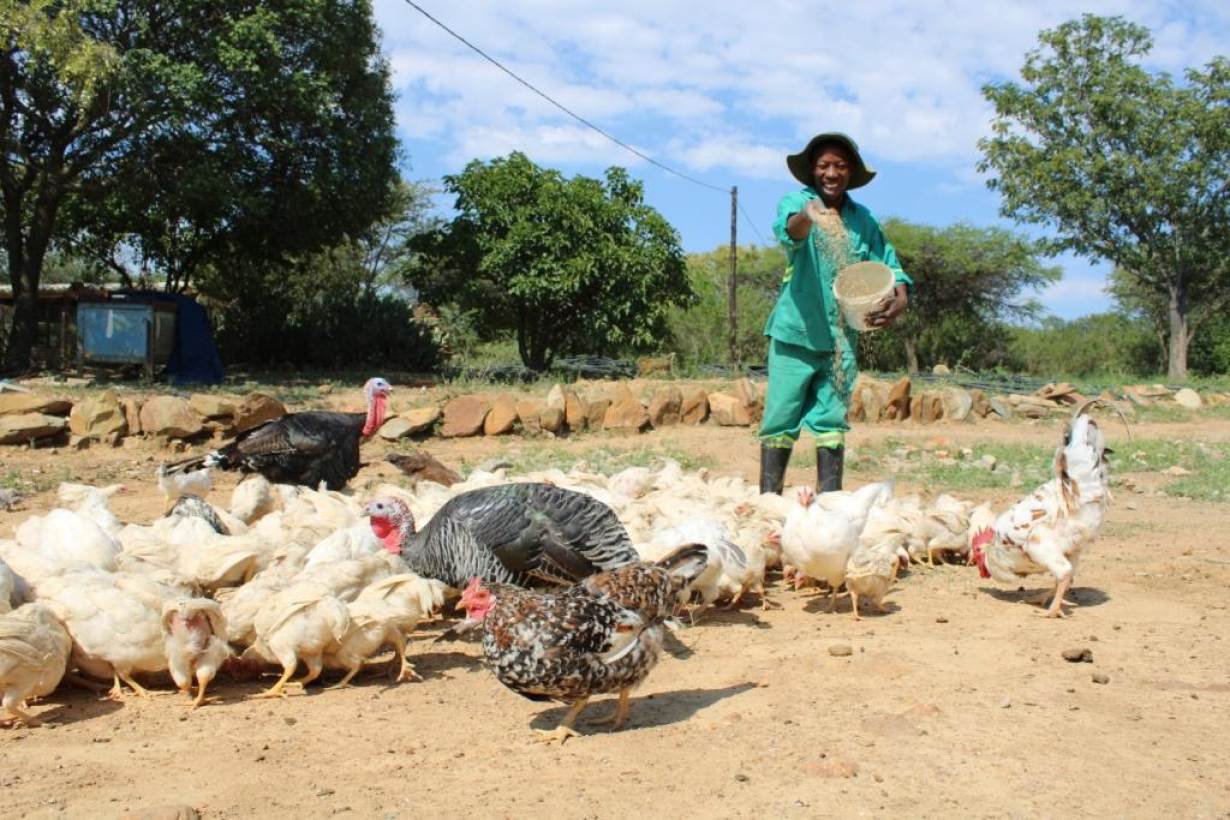 Despite the challenges, farmer Kwanele Ndlovu and her daughter, Senamiso, have thrived by following extension advice.

Last year, they used early-maturing seed varieties and planted a month later in November because of delayed rains.

Senamiso is now expecting more than the 250 50-kg bags of maize she harvested last season.

“I have realized that not every seed is adaptable to climate change – and we had to change to medium-maturity varieties unlike last year when rains were not favorable, and we planted ultra-early varieties,” she said.

Read More: Zimbabwe Is Facing Floods and Drought at the Same Time

“Growing maize is not the only solution for food security,” he told the Thomson Reuters Foundation. “With maize only, you harvest once but with horticulture it is right round the year and you get money every day.”

Prince Kuipa, an economist with the Zimbabwe Farmers’ Union, said this year farmers faced the risk of total crop and livestock loss and rising incidence of new pests and diseases, but investment in conservation agriculture had paid off.

The center in 2017 launched a 1.5 million-euro ($1.7-million) regional project to help more than 150,000 smallholder farmers in Malawi, Zambia and Zimbabwe cope with climate change.

It has enabled farmers in the three countries, who are vulnerable to weather extremes and food shortages, to use mobile phones to access weather information and to take out insurance.

So far, the program has shown that an approach combining different climate-smart solutions in a partnership between government departments, producer organizations and the private sector works best for farmers, Ajayi said.