Why Global Citizens Should Care
The United Nations encourages people to pursue more sustainable lives. There are many decisions people can make in their daily lives to support the recovery of the oceans and fight climate change. You can join us in taking action on related issues here.

Carrying around a reusable water bottle is an easy way to stay hydrated, reduce your carbon footprint, and limit how much plastic waste you produce.

Now it can also be a way to help coral reefs.

The reusable water bottle company Naeco has partnered with marine conservation organization Coralive to replant coral reefs around the world. A portion of all sales from the bottles go to funding coral reef rehabilitation.

The partnership was spurred by Naeco founder Bill Levey’s love for the ocean. At first, he focused on building a company that would mitigate the problem of plastic pollution. While that remains a core part of the company, the new partnership allows Naeco to directly address some of the crises facing marine life.

“I’m a diver, I’ve been an ocean enthusiast my whole life, and I’ve actually seen the decline and destruction of reefs on different dives,” he told Global Citizen. “I wanted to find out how we could contribute to the rebuilding of coral, which is so vital to the ocean.

“This [partnership] is a way for people who care about the ocean to get involved and make an impact in a very easy way,” he said.

Coral reefs are dying at an alarming rate around the world. As greenhouse gas emissions warm the atmosphere, the world’s oceans are absorbing much of the excess heat, causing widespread marine heat waves. Coral are highly sensitive to temperature shifts and increasingly common heat waves are cooking them alive through a process known as coral bleaching.

Major swaths of the the Great Barrier Reef, for example, have succumbed to coral bleaching.

Coral reefs are also harmed by industrial pollution, invasive species, overfishing, plastic pollution, and ocean acidification, which is when the oceans absorb too much carbon dioxide from fossil fuel emissions and become acidic. Scientists estimate that these threats could destroy the vast majority of coral by 2050.

Coralive’s restoration approach involves growing resilient types of coral on cross-sections of metal that can then be planted on existing reefs.

“The micro-fragmentation technique is pretty amazing,” Levey said. “We run some electricity through these tiny fragments attached to a metal substrate and they can grow 20 to 50 times faster than the normal growth rate of coral.” 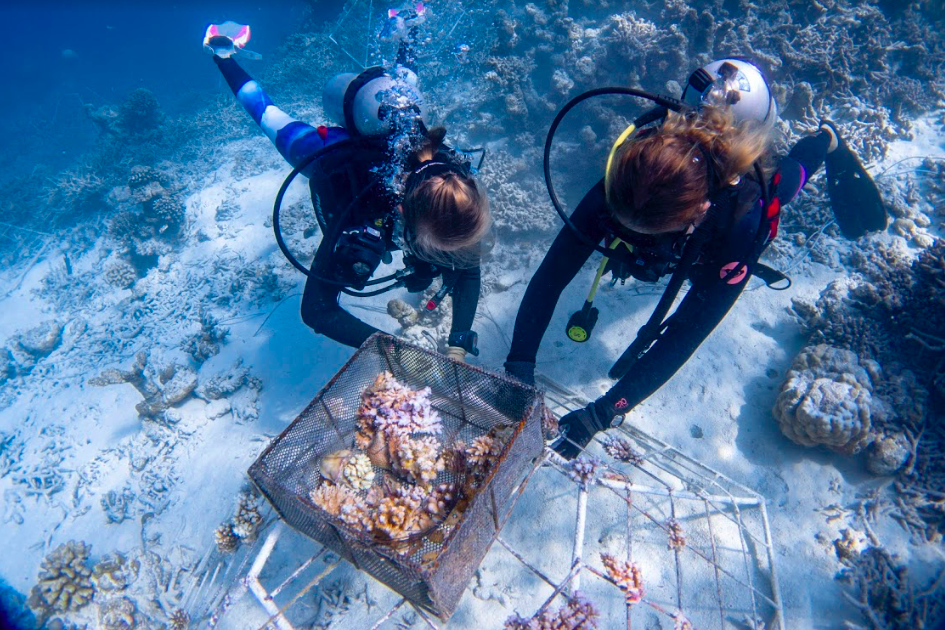 The team selects coral from areas that have experienced extreme bleaching events. The coral that survive these events are presumably more resilient than the coral that died off, and can therefore help to fortify reefs elsewhere.

The decline of coral reefs reflects the broader fate of the world’s oceans. From climate change to overfishing to endless pollution, marine habitats are being hollowed out and turned into dumpsters and graveyards.

Levey is part of a growing movement working to reverse these changes and restore the ocean to its full ecological glory.

“A lot of these issues are daunting to deal with, and it’s a bit overwhelming to think about what you can do,” Levey said. “We wanted to create a way for people to actually create a difference.”