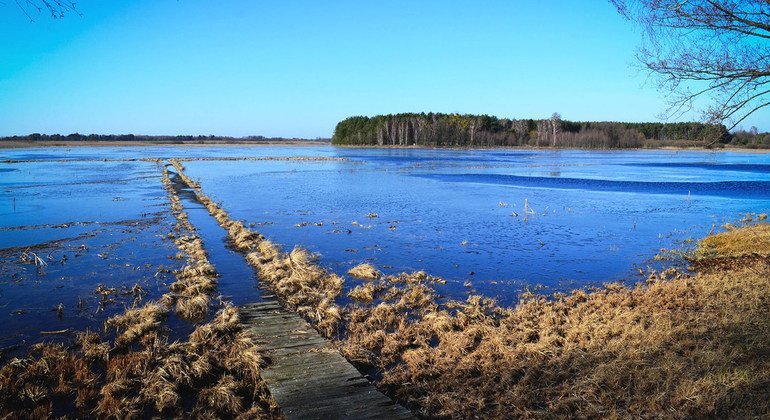 The new global report calls, among others, for concrete efforts to address rising water stress and improve the efficiency of water use in agriculture and industry, and it outlines actions in three areas: first, enabling people to adapt to the impacts of climate change; second, improving the resilience of livelihoods; and, third, reducing the drivers of climate change.

Tackling water (in)security and climate change, two of the most critical crises the world will continue facing over the next several decades, ­the 2020 UN World Water Development Report, compiled by the UN Educational, Scientific and Cultural Organization (UNESCO), in collaboration with UN-Water, provides decision-makers with knowledge and tools to craft sustainable water policies, and calls for scaling up investment to put them into practice.

She stressed: “This potential of water must be explored, given that our actions to reduce global warming are currently lagging behind our ambitions, despite wide adherence to the Paris Agreement…the report shows that water does not need to be a problem – it can be part of the solution. Water can support efforts to both mitigate and adapt to climate change.”

‘Everyone has a role to play’

UN Secretary-General António Guterres in his message on World Water Day said, “everyone has a role to play,” and called on all stakeholders to increase climate action and invest in robust adaptation measures for water sustainability.

By limiting global heating to 1.5 degrees Celsius, he said, “the world will be in a much better position to manage and solve the water crisis that we all face.”

This year’s World Water Day focuses on water and climate change. With 2020 a make-or-break year for climate action, this focus is timely – UN chief António Guterres

“Water is the primary medium through which we perceive the effects of climate disruption, from extreme weather events, such as droughts and floods, to glacial melting, saltwater intrusion and sea level rise,” he said.

This will negatively affect health and productivity and act as a threat multiplier for instability and conflict. The solution is clear, said the UN chief.

“We must urgently scale up investments in healthy watersheds and water infrastructure, with dramatic improvements in the efficiency of water use, said Mr. Guterres, adding that the world must anticipate and respond to climate risks at every level of water management.

Above all, said the Secretary-General, “we must use this year and COP26 in Glasgow to bend the emissions curve and create a secure foundation for water sustainability,” he stressed, referring to the upcoming UN climate change conference, currently scheduled for next November 2020.

‘A water crisis is a global crisis’

In her message on the Day, UNESCO chief Azoulay said that with four billion people worldwide forced to contend with water scarcity, “without sustainable access to water, we will be unable to achieve goals such as quality education or the development of more prosperous, fairer societies.”

“Given the urgency of the situation, the coming decade needs to be one of action,” she declared.

The 2020 Report, she said, sets out “concrete solutions for ensuring access to water for all: improved water resources management, the mitigation of water-related hazards, easier and more sustainable access to sanitation.”;

Action to save the planet and its water will only be useful if future generations were fully involved, including through UNESCO member States incorporating issues related to environmental education in their school curricula.

‘We simply cannot afford to wait’

The report, launched in Paris and Geneva, echoed the UN officials’ call on States to make more concrete commitments to address the challenge, and warned that climate change will affect the availability, quality and quantity of water needed for basic human needs, thus undermining enjoyment of the basic rights to safe drinking water and sanitation for billions of people.

This will be a considerable challenge: ­2.2 billion people currently do not have access to safely managed drinking water, and 4.2 billion, or 55 per cent of the world’s population, are without safely managed sanitation.

There are solutions for managing water and climate in a more coordinated manner and every sector of society has a role to play. We simply cannot afford to wait – UN-Water Chair Gilbert F. Houngbo

UNESCO has also said that the critical need to substantially improve access to clean water for drinking and hygiene for billions of the world’s people has been further thrown into stark relief by the current deadly outbreak of COVID-19.

The 2020 World Water Development Reports reveals that water use has increased six-fold over the past century and is rising by about one per cent a year.

However, it is estimated that climate change, along with the increasing frequency and intensity of extreme events – storms, floods and droughts, will aggravate the situation in countries already currently experiencing ‘water stress’ and generate similar problems in areas that have not been severely affected.

Furthermore, the report highlights the fact that poor water management tends to exacerbate the impacts of climate change, not only on water resources but on society as a whole.

The Chair of UN-Water, and President of the International Fund for Agricultural Development (IFAD), Gilbert F. Houngbo, said: “There are solutions for managing water and climate in a more coordinated manner and every sector of society has a role to play. We simply cannot afford to wait.”

To this end, the report outlines a range of adaptation and mitigation measures, including natural, technical and technological measures to curb damage, and steps humans can take to effectively to limit greenhouse gas emissions, as well as protect the environment.;

The report also mentions innovative water management interventions such as fog capture, or more traditional ones such as wetland protection, as well as proven ‘conservation agriculture’ techniques. The ‘reuse’ of partially treated wastewater for agriculture and industry, without necessarily making it safe to drink, is another highlighted approach.

On the “crucial” question of financing, the authors argue that there are increasing opportunities to systematically integrate adaptation and mitigation planning into water-related investments, in order to make them more attractive to donors.

A good example of this is a Green Climate Fund project in Sri Lanka. This aims to improve irrigation systems in vulnerable village communities and promote climate-smart agricultural practices in three river basins, offering both climate adaptation and mitigation benefits, while conserving water and protecting drinking water sources.