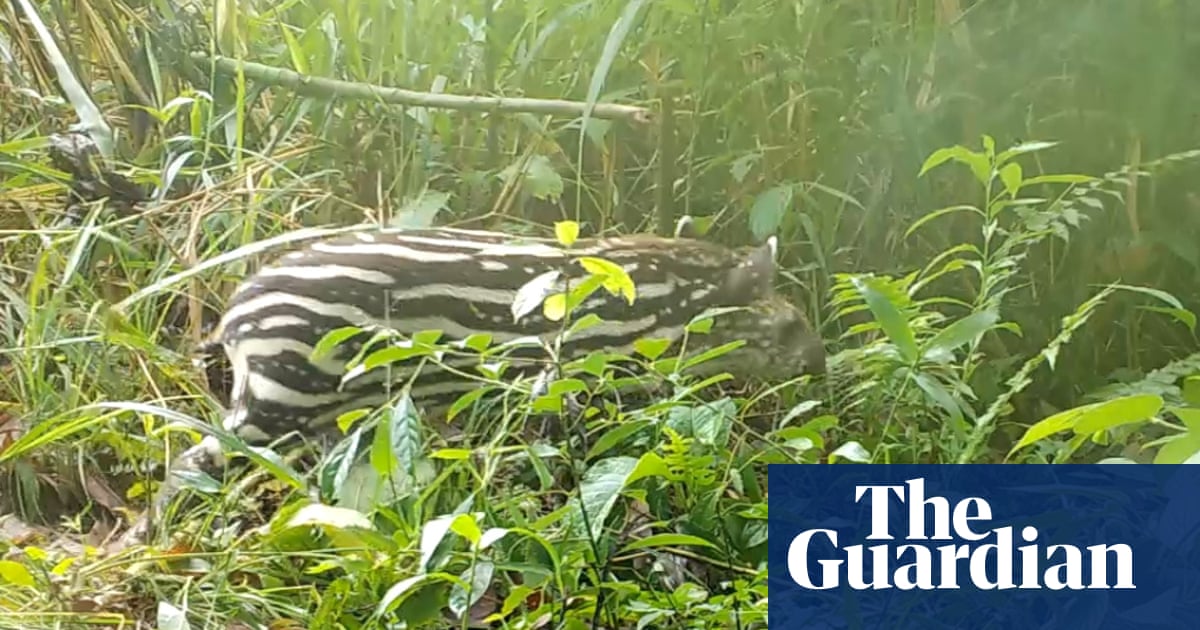 Hopes for a recovery of Brazil’s most endangered ecosystem have been given a boost by the first birth of a wild tapir in Rio de Janeiro’s Atlantic Forest for more than a century.

Scientists said video clips of the baby tapir proved the initial success of a re-introduction strategy for the threatened mammal, which is often described as “a forest gardener” because it plays a vital role in the dispersal of seeds.

The images of the pig-like calf with a characteristic prehensile snout were captured by a camera trap in the Guapiaçu Ecological Reserve and released in Brazilian media outlets.

Researchers believed the calf was born in January and a second may be on its way because another adult female appears to be pregnant.

Maron Galliez, a professor of biology at the Federal Institute of Education, Science and Technology of Rio de Janeiro, said this was a milestone for the reintroduction project, which has been eight years in planning and implementation.

Since 2017, four captive-bred males and three females have been put into the forest by the Refauna programme, which Galliez leads.

“The whole team is very happy,” he said “We now know the project is moving in the right direction.”

As with wolves in Yellowstone and beavers in the UK, the tapir reintroduction programme aims to accelerate restoration of a degraded natural habitat.

The Atlantic Forest, which once covered more than a million square kilometres along the eastern coast of Brazil and Argentina, has been steadily sliced and diced by loggers, plantation owners and economic development.

Trees now cover just 7% to 15% of the forest’s former area, mostly in shrinking fragments between expanding cities. But it remains a globally important ecosystem due to its role in carbon sequestration, water management and habitat provision to a wide range of species including capybara, armadillos, toucans and capuchins.

Tapirs were eradicated in Rio de Janeiro state in 2014, and biologists say their return is more than symbolic.

Growing to 2.5 metres in length and weighing more than 300kg, they are the largest terrestrial mammals in Brazil and play an important role in the dispersal of large seeds that can provide the pillars of the canopy. They also prune branches and leaves.

A study last year indicated tapirs could make reforestation quicker and cheaper because they tend to graze in degraded areas and their dung is packed with tree seeds.

“The birth of a tapir in nature indicates the formation of a population in the state,” Galliez said. “This is essential to restoring the proper functioning of this ecosystem.

There are other encouraging signs. Deforestation of the Atlantic Forest fell by 9.3% from October 2017 to April 2018, according to satellite analysis by the Brazilian National Institute for Space Research.

Close to the border with Argentina, this forest is also the only place in South America where jaguars have increased in recent years as a result of heightened anti-poaching measures by the authorities and fewer conflicts with humans as a result of the shift from cattle ranching to soya farming.

However, conservationists warn these improvements are from a dangerously low baseline and the overall trend for the forest is still downward due to pressure from agribusiness and land speculation. The lowland tapir is classified as a vulnerable animal, according to the International Union for the Conservation of Nature.

Galliez said the return of a tapir population in Rio de Janeiro could be a turning point, but only if there was further support from donors to support conservation and reintroduction programmes, and from the authorities to curb poaching and deforestation. Currently, he said, these do not go far enough.