Governments around the world are declaring “climate and environmental emergencies” to highlight the unsustainable ways in which humans, over a few generations, have transformed the planet.

We’ve made enough concrete to cover the entire surface of the Earth in a layer 2 millimetres thick. Enough plastic has been manufactured to Clingfilm it as well. We annually produce 4.8 billion tonnes of our top five crops and 4.8 billion head of livestock. There are 1.2 billion motor vehicles, 2 billion personal computers, and more mobile phones than the 7.6 billion people on Earth.

Globally, human activities move more soil, rock, and sediment each year than is transported by all other natural processes combined. Factories and farming remove as much nitrogen from the atmosphere as all Earth’s natural processes and the global climate is warming so fast that we have delayed the next ice age.

We’ve entered the Anthropocene and left behind the stable planetary conditions of the past 10,000 years that allowed farming and complex civilisations to develop.

Today’s globally interconnected network of cultures relies on a stable global environment. So how do we design national and international policies to deal with this global climate and environmental emergency? 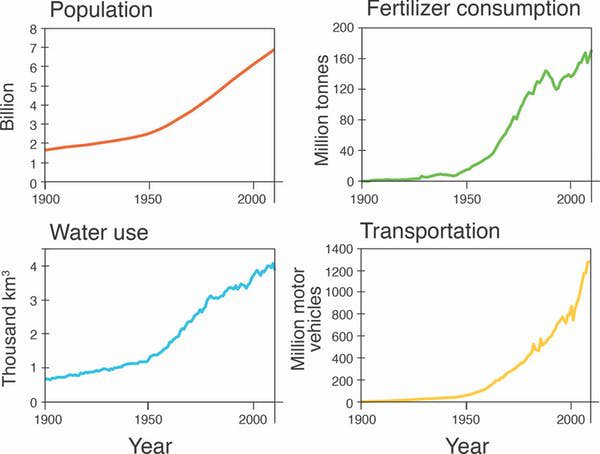 Increase in human population, fertiliser use, water consumption and vehicle ownership in the world since 1900. Credit: Maslin & Lewis.

A study in Nature Sustainability recently attempted to summarise and evaluate the different types of policies that could be used to save our environment.

The study is based on the planetary boundaries concept developed by a team of academics led by sustainability researcher Johan Rockström and Earth system scientist Will Steffen. They defined nine physical environmental boundaries that, if exceeded, could result in abrupt changes and serious repercussions for human civilisation.

We’ve already crossed three of these boundaries by changing the climate, destroying biodiversity and disrupting the nitrogen and phosphorus cycles through agriculture.

This study focused purely on physical limits to human life on Earth and didn’t deal with the underlying dynamics of consumer capitalism which govern most of human life. In contrast, economist Kate Raworthcombines the physical and social needs of humanity by including water, food and health alongside education, employment, and social equality. Between these two sets of needs is a just operating space for humanity.

Living within this space, according to Raworth, demands inclusive and sustainable economic development, which is becoming known as “donut economics”. At a fundamental level, it means we design our economic policies to look after the planet and everyone on it. 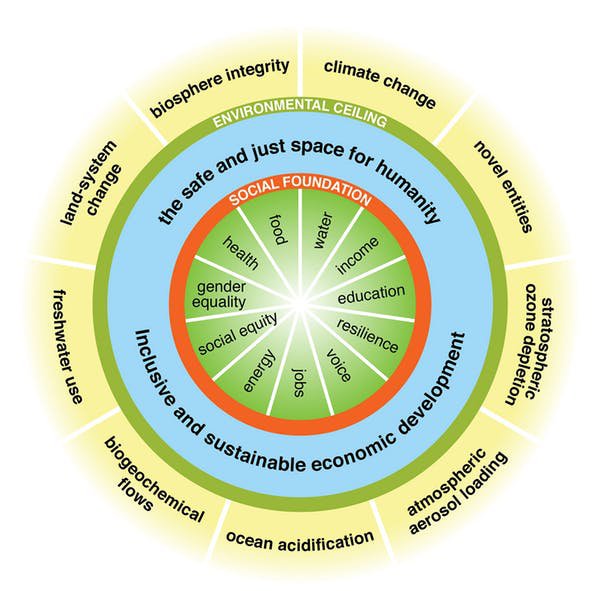 Adaptation of Kate Raworth’s illustration of donut economics and how physical and social needs of society must be considered together. Credit: Kate Raworth

The Nature Sustainability study focuses on command and control policies such as taxes, subsides and fines, instead of looking at what is driving consumption. Essentially, the authors apply old policies to try and fix the problem of the Anthropocene, which given its scale, needs a whole new set of ideas.

One of these is universal basic income (UBI) – a policy that would guarantee a financial payment to every citizen, unconditionally, without any obligation to work, at a level above their subsistence needs.

Small-scale trials of UBI show that educational attainment is higher, healthcare costs go down, entrepreneurship levels both in numbers of people and success rates go up, as does self-reported happiness. However, UBI does more than this: it could break the link between work and consumption.

World Governments are starting to declare climate & environmental emergencies to highlight the unsustainable ways in which humans are transforming our planet. @SimonLLewis and I discuss ways we can respond – including Half-Earth & Universal Basic Incomehttps://t.co/mWqa7ZPaW1

Breaking this could, if carefully managed over time, dramatically reduce environmental impacts by slowing the treadmill of producing and consuming things that currently fuels untrammelled economic growth. We could work less and consume less, and still meet our needs. Fear for the future would recede, meaning we wouldn’t have to work ever harder for fear of having no work in the future. This is especially important as automation and intelligent machines will increasingly compete with humans for most jobs.

One argued use for UBI would return anything not spent by people to the original pool, meaning the money can’t be saved. Wealthy people may not use it at all, but it would guarantee that essentials are affordable for the poorest.

UBI therefore eliminates extreme poverty and reduces dependency. It gives people the agency to say “no” to undesirable work, including much environmentally damaging work, and “yes” to opportunities that often lie out of reach. With UBI we could all think long term, well beyond the next pay day. We could care for ourselves, others, and the wider world, as living in the Anthropocene demands.

A second radical policy of environmental repair could come from the simple but profound idea that we allocate half the Earth’s surface for the benefit of other species. “Half-Earth” is less utopian than it first appears.

By 2050, over two thirds of the world’s population will live in cities. We have become an urban species, with the world outside the major cities becoming increasingly wilder. There is an opportunity to return this land to its pre-human wild state through rewilding. Mass-scale forest restoration is already underway, with commitments across 43 countries to restore 292 million hectares of degraded land to forest – 10 times the area of the UK.

UBI would give people the right to choose when it comes to fulfilling their own basic needs. Rewilding Earth does the same for other species’ needs – we would provide the conditions for them to thrive and to manage their own well-being. Instead of relying on 20th-century ideas, we need carefully designed policies that could push society towards a new mode of living in a new epoch.

Surviving the Anthropocene means breaking the cycle of production and consumption undermining the conditions which have allowed our global network of complex civilisations to flourish. Our global climate and environmental emergency will not be solved by modest changes to taxes. Bolder changes would mean we can change the way we live to radically reduce suffering and allow people and wildlife to flourish.

This article was originally published in The Conversation. Read the original article here.