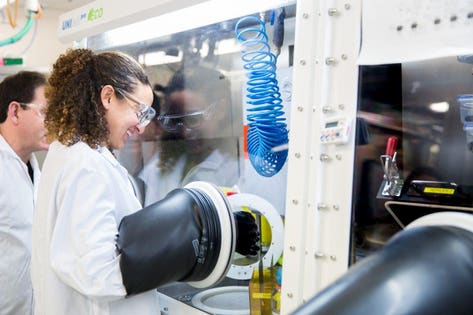 For a while, transparent solar cells were touted as electricity generating building materials. Being transparent, they were pitched for use as roofing or window augmentations with distinctive colors catching the eye of architects looking for flourishes with both aesthetics and ethics in mind.

Now the front runner in the realm of transparent solar, based on organic perovskite crystals rather than more familiar silicon technology, is pushing towards commercialization. And its ambitions go far beyond solar gimmicks.

Oxford PV, spun out of Oxford University, has this month secured major deals to support its progression from the lab to large-scale production. It almost doubled its total cumulative fund-raising with a fresh round totaling £31 million (US$40.5 million). That included some long-term backers returning to the table and interestingly a major investment from the Chinese wind turbine manufacturer Goldwind.

“It is our belief that photovoltaics and wind power will become an increasingly important part of the global energy mix, over the next 20 years. We have been impressed with Oxford PV, their perovskite photovoltaic technology and the pace of their progress, and we look forward to supporting the company going forward,” said Xiao Zhiping, VP, Goldwind.

Oxford PV followed that deal with the purchase of a production line from Meyer Burger, one of the leading suppliers of manufacturing equipment for solar manufacturers. That was in return for a 18.8% stake in Oxford PV with the option to double that stake further down the road.

The objective for Oxford PV is not to develop specialist solar products for the construction industry but to develop a perovskite cell that can be layered on top of a standard solar cell. A so-called tandem cell, for obvious reasons.

Efficiencies of higher quality solar modules are currently in the order of 21% or so, individual cells are hitting 24%. Meyer Burger recently plotted out its roadmap to module efficiencies of 25%.

The addition of a transparent perovskite cell makes efficiencies in excess of 30% achievable. At the tail end of 2018, Oxford PV revealed it had already achieved a record of 27.3%.

Existing backers include insurance giant Legal & General, oil and gas firm Equinor and now a global wind manufacturer. Add to that the firm that provides the tools that will take the company into commercial production and Oxford PV has surrounded itself with a powerful group of backers. The valley of death has claimed many a clean energy start-up but it is becoming increasingly clear that Oxford PV has the technology, the funds and (literally) the tools to press on.