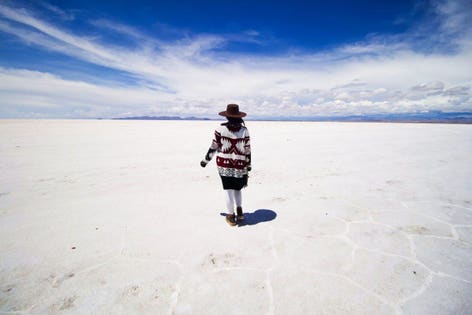 A salt flat in Bolivia, one of the world’s richest sources of the lithium used in batteries for electric cars, phones and electricity storage

A breakthrough nanotechnology from cleantech start-up EnergyX promises to revolutionise the speed, cost and sustainability of accessing the world’s lithium reserves.  The technique uses a newly developed class of materials to act like an organic sieve to separate out lithium, rather than vast networks of evaporation ponds. Lithium is a critical element used in the battery technology that underpins much of the world’s consumer electronics, electric vehicles and energy storage systems.

By 2040 it is estimated that there will be 56 million annual electric vehicle (EV) sales and over 1095 gigawatts of battery energy storage systems in the world, an exponential increase on 2 million annual EV sales and 9 gigawatts in 2018.  These rely on the same Lithium-ion battery technology found in phones and laptops, requiring rapid scaling of the raw material supply chain to keep pace.

“Lithium is now featured at the top of the United States government’s Critical Minerals List, showing its geopolitical importance,” cites EnergyX founder and CEO Teague Egan. “Lithium is arguably the new oil, the single most important and valuable economic commodity for the 21st century.”

Egan believes that while there is no immediate raw material shortage to meet this demand, the rapid uptake in the use of batteries for a wide range of technologies cannot be met by expanding traditional production techniques, a view shared by Mark Saxon, CEO & President at Leading Edge Materials Corp.

“Relatively little has been invested in the production of graphite, cobalt, nickel and lithium. With 5 to 10 times demand growth forecast in the next decade, and a new mine taking 10 years to discover and develop the maths is challenging,” comments Saxon.

Over two thirds of the world’s lithium reserves are suspended in “brines” of highly concentrated salt-water.  Some of the largest sources are in the salt flats of Bolivia, Chile, China, Argentina and Tibet.  Most of it is extracted using vast networks of evaporation ponds in a process that can take up to two years.

“The lithium is mixed in with a lot of other similar sized salts, like magnesium, sodium, calcium and potassium,” says Egan.  “That makes it really difficult to separate out the useful lithium you want.”

Traditional methods rely on the sun evaporating away the water content and waiting for the salts to precipitate out one by one.  As lithium is one of the lightest elements in the periodic table, it is the last to come out of the brine mix, and a lot is lost along the way.  Typically, only 30-50% is successfully extracted.

The role of disruptive technology

It’s a method that EnergyX believes is antiquated and doesn’t scale well, as it is both land and labour-intensive.

Egan gave the example of a facility owned by lithium extraction company SQM.  Their facility in northern Chile covers over 44km2 and requires 2000 employees to operate.  “At $40/m capex, that is roughly $1.76 billion to set up this evaporation pond system that is only yielding 30,000 metric tons of lithium per year,” says Egan.

Increased production would require a relatively proportional increase land and labour force, and this is not practical when the near-term demand for lithium is increasing by a factor of ten.

“We have the technology to secure the global supply of lithium for the future and extract it in a more environmentally sustainable method,” Egan added.

EnergyX claim their patented LiTAS technology, underpinned by research published in leading academic journals Science and Nature, revolutionises this.  The new method accelerates the lithium extraction process from years to days, and rather than a 30-50% extraction rate, the technology captures closer to 90% of the lithium in the mix.

The underlying science is based on a new class of materials called metal-organic frameworks (MOF), which have an extremely large internal surface area and small pore sizes.  These act like an organic sieve to separate very accurately different metal ions of similar size.

“The fact that we are seeing MOF membranes target and separate these specific metal ions in an aqueous mixture is a pioneering and novel breakthrough,” explains TJ Dilenschneider, Chief Science Officer at EnergyX.  “The ‘salts’ in saltwater brines are all so similar, that having the ability to target and separate lithium from magnesium and calcium or sodium from lithium at high concentrations is phenomenal.”

The road to commercialisation

While Egan did not provide a precise cost using the new technology, he indicated the speed of production is in the magnitude of 100x faster and requires a minimal workforce overhead.   Both factors will drastically reduce the price of lithium, which EnergyX say make up a substantial amount of a battery cell’s cost.

In turn, more competitive battery costs would help accelerate the uptake of electric vehicles and increasing levels of solar and wind energy, which are the cheapest form of electricity generation in a growing number of markets around the world but require energy storage to address their variability.

The set-up costs and environmental impact of LiTAS are also expected to be minimal.  “Compared to the vast evaporation ponds, our technology can be deployed in fraction of that, in a factory setting,” added Egan.  With no major land purchase costs, significant areas of natural terrain can be left unspoilt and unlike traditional evaporation techniques used by lithium miners no external freshwater usage is required.

The technology is a culmination of thousands of hours and millions of dollars in research stemming from a tri-institutional collaborative effort between Monash University, CSIRO (the Australian National Laboratory), and The University of Texas at Austin (UT).  The work was also backed by a $10.75m U.S. Department of Energy grant.

EnergyX secured the exclusive worldwide rights to the technology for an undisclosed sum and other financial instruments.  Several of the key scientists at the institutions are members of EnergyX’s Scientific Advisory Board.

The company says it is currently in discussions with major lithium mining companies to license the technology.