Why Global CItizens Should Care
Plastic pollution is causing immense harm to the world’s ecosystems, and governments around the world are beginning to curb plastic production in accordance with the United Nations’ Global Goals. You can join us in taking action on this issue here.

Plastic straws have become one of the great scourges of the ocean, and in a massive installation by artist and activist Benjamin Von Wong, they’ve been transformed into majestic waves with all the verve that entails.

The “Strawpocalypse” features green, blue, and black straws for water, clear straws for the surf’s froth, and yellow straws for sand. Von Wong came up with the idea after learning more about the problem of plastic waste in the world’s oceans. He wanted to create a dramatic scene that conveyed the scale of the problem.

“Numbers, statistics, and facts hit the mind, but art has the potential to hit the heart,” Von Wong told Global Citizen. “I personally see my role as an artist to give people convenient excuses to talk about the problem.” 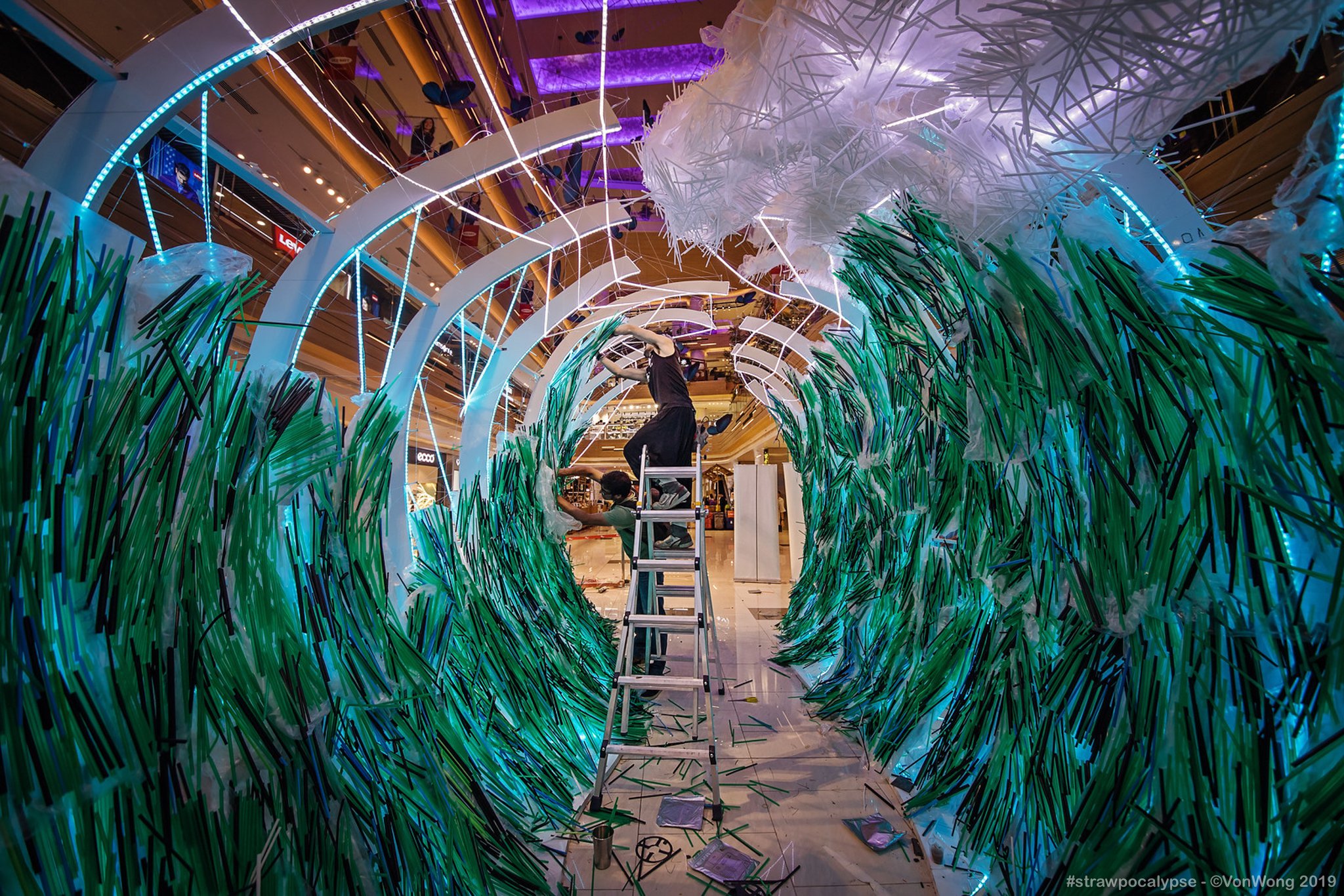 The project is currently on display in Estella Place in Ho Chi Minh City, Vietnam, through April 24, after which Von Wong hopes another institution, business, or collector will acquire and transport the work.

“There’s only so many times you can show depressing images of plastics clogging up our oceans before people tune off,” he said. “It takes art and inspirational stories to keep people motivated and interested on a regular basis — and for them to inspire those around them. The more top of mind a problem is, the more chance a solution has of gaining traction. Without public interest, it’s harder for companies and governments to gain the traction they need to pass any form of resolution.”

Before he could create the sculpture, he first had to get enough straws, and he wanted the make sure that the collection process also addressed the problem overall. 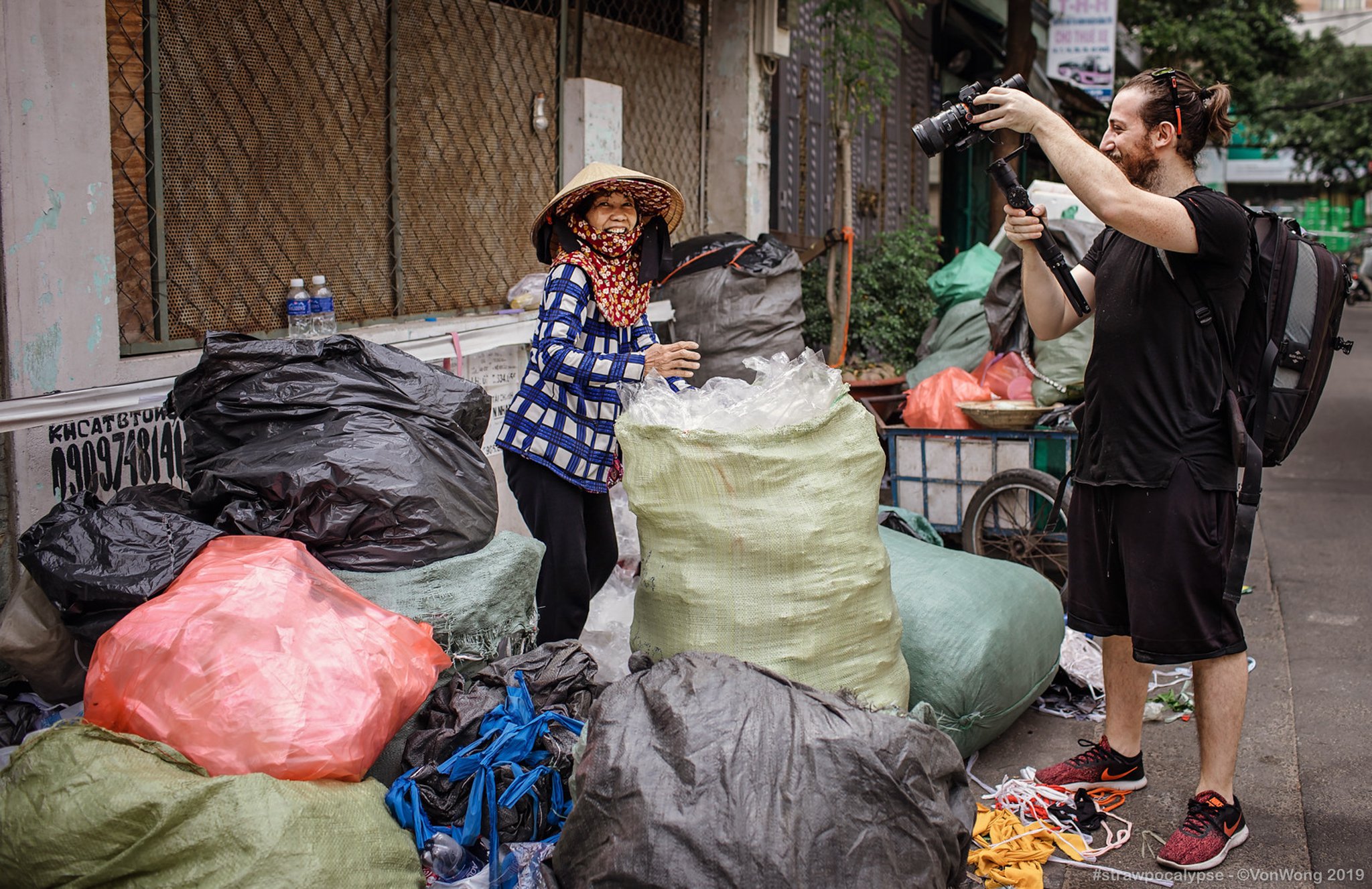 So he partnered with the nonprofit Zero Waste Saigon to marshal dozens of volunteers to begin clean-up efforts around Vietnam, and Vietnam Starbucks soon came on board to sponsor the effort.

The team collected tens of thousands of straws and thousands of plastic bags. The volunteers organized the straws according to color and then attached them in different arrangements.

Once color-coordinated, Von Wong and his collaborators attached the straw components to curved structures that served as the base of the wave. 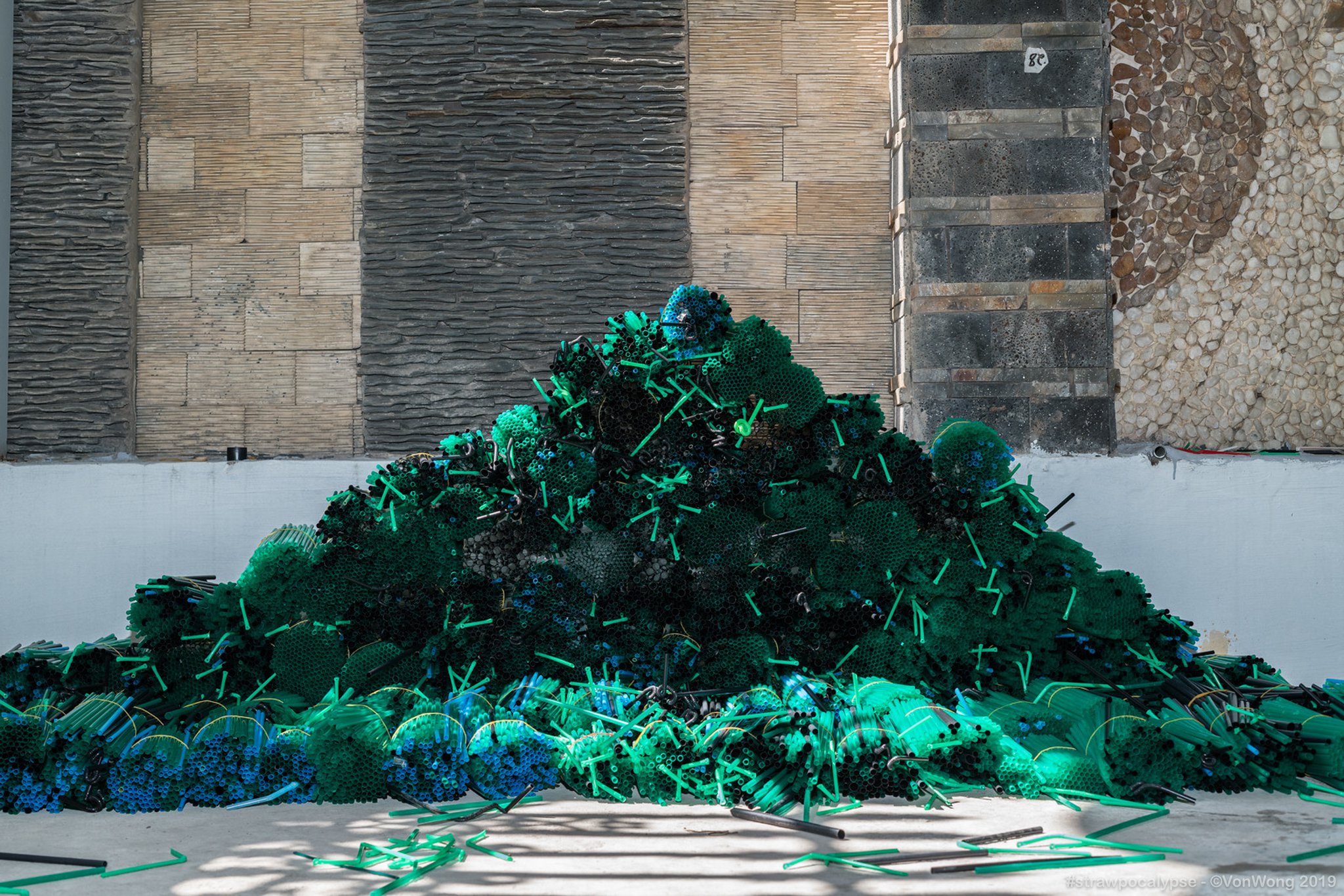 “I think the hardest part about building the straw wave was just getting the straws stuck onto the sheets of recycled plastics,” Von Wong said. “Though I thought it would be a quick and simple process, those piles of straws just felt pretty endless as we got them ready for the art installation.”

After two weeks, they had finally created a parted wave that people could walk through.

Von Wong is a leading figure in the movement to transform plastic waste into art. Over the past few years, he’s created various sculptures with gathered plastic, including waterfalls and underwater scenes. 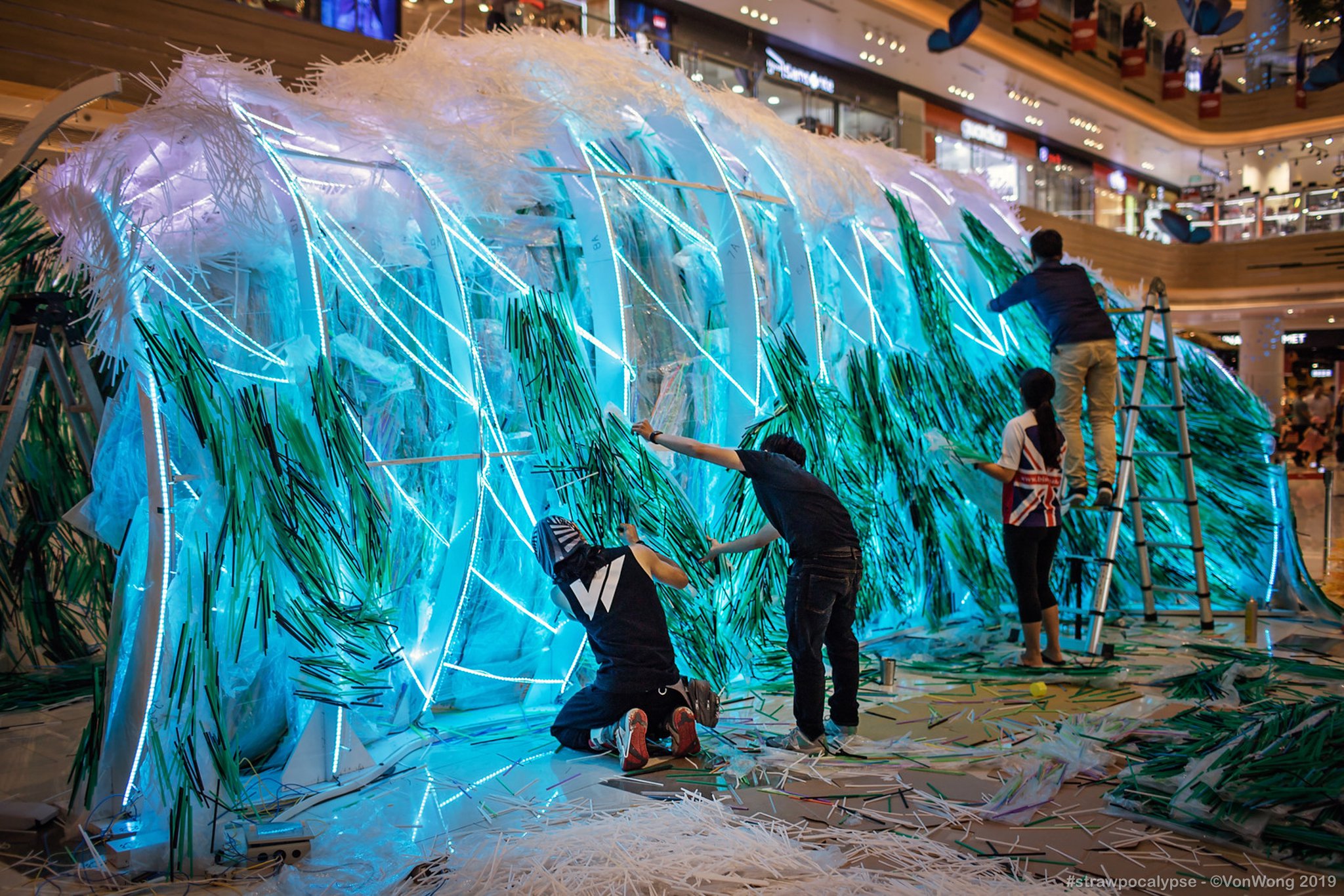 He got into the scene on a whim, he said.

“At the end of 2015, I decided to focus exclusively on social impact projects, but I didn’t have a particular affinity to any cause,” he said. “Through watching different documentaries, I learned more about the different problems and it was only after I decided to tackle ocean-plastics (it was at the time where the Great Pacific Garbage Patch was getting a lot of traction), that I started to do more research into the topic and learn about how pervasive the problem is.”

Read More: This Man Turned a Year’s Worth of Plastic Into Art and It’s Eye-Opening

Other artists have transformed plastic into beautiful works as well, and their art help to both highlight the problem of plastic pollution and inspire people to take action.

“Although this installation is made from straws, it isn’t just about straws,” Von Wong wrote in a blog post. “It’s about taking a first step towards paying attention to the plastic epidemic threatening the oceans we rely on.” 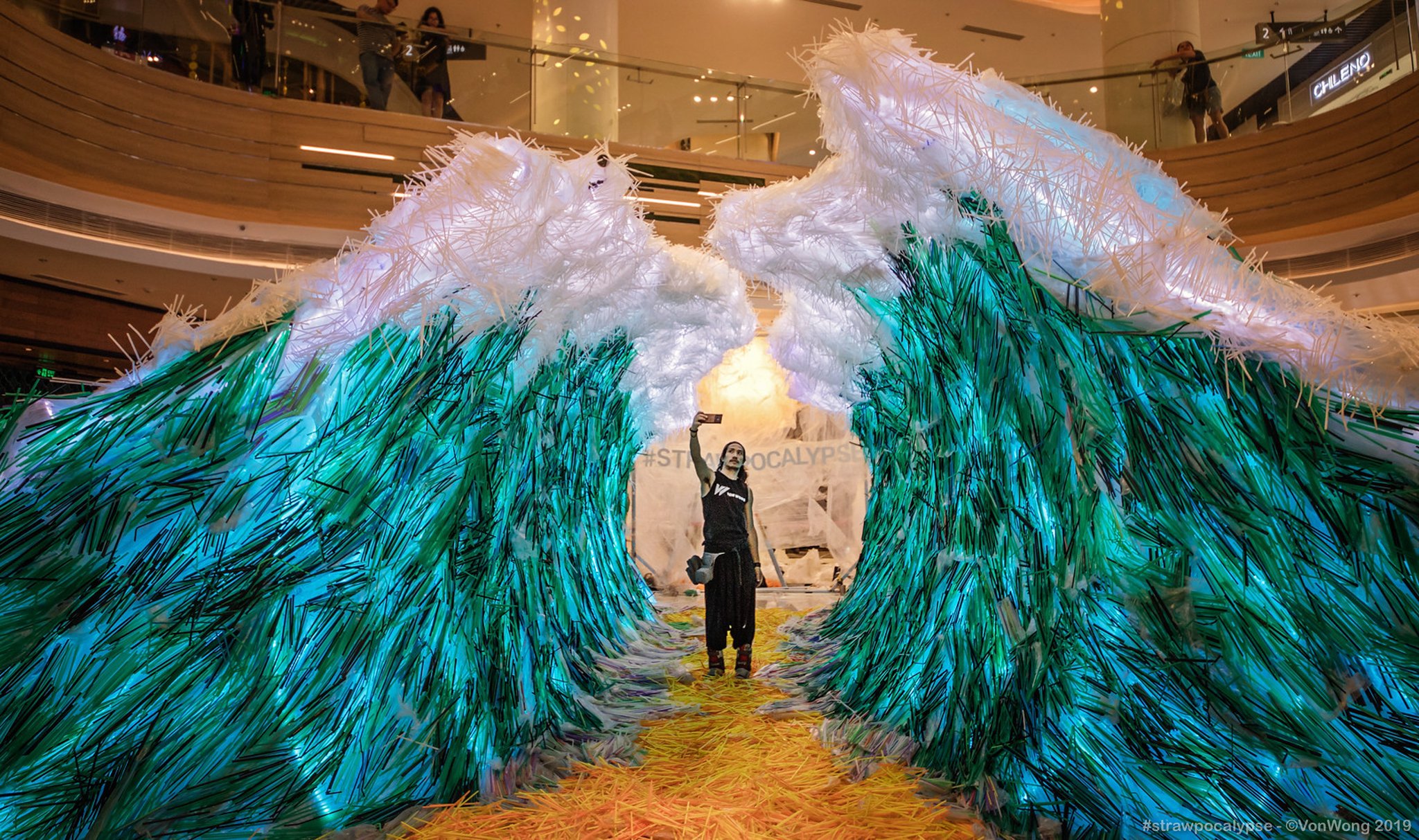