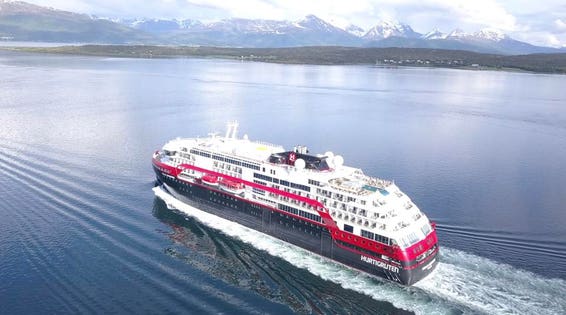 In an exclusive interview with Forbes, Hurtigruten CEO Daniel Skjeldam discusses the importance sustainability on the high seas and why it’s imperative that cruise ship operators conform to more sustainable practices before it’s too late.

When it comes to sustainability, cruise ships have always been somewhat of a boondoggle. However, Norwegian cruise operator Hurtigruten is working to change that with the launch of MS Roald Amundsen, the world’s first hybrid electric–powered expedition ship.

Named after the first Norwegian explorer to cross the Northwest Passage and reach the South Pole, the 530-passenger vessel is the first in line for the next generation of greener Hurtigruten ships and features state of the art technology that utilizes battery powered technology that will cut down on fuel consumption and carbon emissions by 20%.

“Sustainability is and has been a key part of our business for a while and we have chosen to lead the industry in innovation regarding sustainability and sustainable technology on the ship and that is a crucial part of driving the company forward,” Hurtigruten CEO Daniel Skjeldam told Forbes. “We believe that businesses should be leading in a much larger extent than they do today and that’s why we’ve chosen to lead by example and why Hurtigruten is doing a lot of investment in this area.”

“Sustainability for Hurtigruten comes from the core of the business, and the people who work for Hurtigruten who have seen climate change happen in front of their eyes over the last decade,” Skjeldam said. “There’s been a growing concern about that for years with seeing the challenges that animal life faces in the areas we’re sailing, melting glaciers and glaciers that used to be in a certain areas that have retracted over the last decade is concerning.”

Using excess energy from the engine and turning that energy into one of two massive battery packs on board, the excess energy from the battery pack is then used to give the ship a more power when needed. The ship is also capable of operating on pure electric power for shorter intervals. While the initiative to operate more sustainably has been years in the making, Skjeldam believes it’s essential for the rest of the cruise industry to adhere to greener practices before it’s too late.

“Its important from a business context because I don’t think cruise ship owners and operators have realized what kind of transformation is expected from them in the future and we honestly believe that the companies who don’t operate as sustainable as possible and who don’t prepare for a world of emission free operations will die,” Skjeldam said. “They will go bankrupt. They will come too late to the table of changes.”

“It’s important from a business context because I don’t think cruise ship owners and operators have realized what kind of transformation is expected from them in the future and we honestly believe that the companies who don’t operate as sustainable as possible and who don’t prepare for a world of emission free operations will die. They will go bankrupt. They will come too late to the table of changes.”

“So I think everyone needs to prepare themselves because unsustainable businesses won’t survive in the future, both because they will have to do huge investments too late and also because their customers will look to the most sustainable operators and they won’t choose the ones who aren’t taking sustainability seriously in the future.”

In addition to maintaining its oath to operate as sustainably as possible, pool and hot tubs will be heated by water used to cool the ship’s engines along with their no single-use plastics policy, Hurtigruten also plans to run at least six of its cruise ships using biogas made from fish farm organic waste, battery packs and liquefied natural gas (LNG) by 2021. Looking ahead, Skjeldam said he hopes Hurtigruten will be completely emission free within the next 20 years of operation.

“Our ambition as a company is to be completely emission free,” Skjeldam said.

Designed by Rolls-Royce in collaboration with Norwegian yacht designer Espen Øino, the Scandi-aesthetic and on board amenities of Roald Amundsen include all of the luxury bells and whistles Hurtigruten is known for.

“This is the most modern cruise ship out there both in respect to the environmental technology on board but also the guest experience will be really innovative,” Skjeldam said. “It’s a very comfortable ship, very comfortable cabins, great food and beverage on board. There’s the jacuzzis and the swimming and infinity pools and a wellness center but most of all if I’m going to mention one distinct thing about this ship it’s the science center.”

The science center, which features state of the art technology and high tech gadgets along with touch screens and science equipment, is a way for guests to meet with the ships expedition team members and actually participate in what Skjeldam calls citizen science run projects.

“So learning will be key, but also giving back as part of citizen science, this is truly unique, not one else has a science center like ours in the world and I think this will be a groundbreaking thing for our guests to experience,” Skjeldam said.