Why Global Citizens Should Care
In addition to sullying the beauty of the ocean, plastic pollution extensively harms marine life. The United Nations calls on countries to enact policies to both clean up plastic waste and prevent pollution from entering the ocean in the future. You can join us in taking action on this issue here.

Seven years after a teenage Boyan Slat hatched a plan on a TEDx stage to clean up the Great Pacific Garbage Patch, his team’s efforts are finally paying off, according to the nonprofit the Ocean Cleanup.

The organization recently announced that a boat has been able to retrieve plastic — including tires, microplastics, ghost nets, and crates — collected by the latest Ocean Cleanup prototype that was deployed to sea in June. The plastic collected will now be delivered to a recycling facility, where it will no longer threaten marine life. Slat said in a press release that the Ocean Cleanup will now be able to expand its efforts following this proof-of-concept mission.

“We are now catching plastics,” Slat said. “After beginning this journey seven years ago, this first year of testing in the unforgivable environment of the high seas strongly indicates that our vision is attainable and that the beginning of our mission to rid the ocean of plastic garbage, which has accumulated for decades, is within our sights.

“We now have a self-contained system in the Great Pacific Garbage Patch that is using the natural forces of the ocean to passively catch and concentrate plastics,” he added. “This now gives us sufficient confidence in the general concept to keep going on this project.”

The Great Pacific Garbage Patch is a soupy concoction of plastic debris that formed in a convergence point for gyres, or massive ocean currents, in the Pacific Ocean. The patch covers a swath of water three times the size of France and it’s become emblematic of the larger crisis of plastic pollution affecting the ocean. Each year, an estimated 8 to 12 million tons of plastic enter marine environments, and there are more than 5 trillion pieces of microplastic in the ocean.

This plastic waste is more than an eyesore. It causes extensive harm to marine creatures that get entangled in plastic nets and fishing gear and wounded by sharp pieces of plastic. Animals also accidentally swallow bits of plastic that get lodged in their stomachs, causing them to starve or die from poisoning. Microplastics, meanwhile, can leach poisons into the water.

The Ocean Cleanup has vowed to clean up half of the plastic within the Great Pacific Garbage Patch in the decades ahead.

The organization developed a low-energy way to deal with the problem. A massive floating device sits in the water and takes advantage of the movement of gyres to collect plastic waste in a 3-foot plastic skirt. After a few weeks of plastic accumulation, a boat travels to the device and removes the waste, then delivers it a recycling facility. The Ocean Cleanup then coordinates with manufacturers to create products from the plastic waste, which can then be sold. 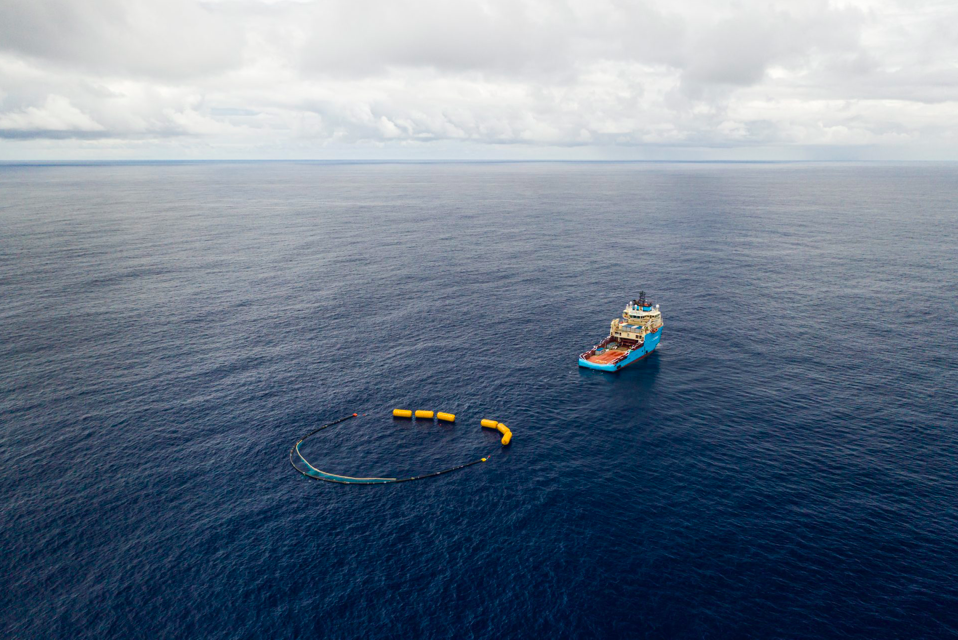 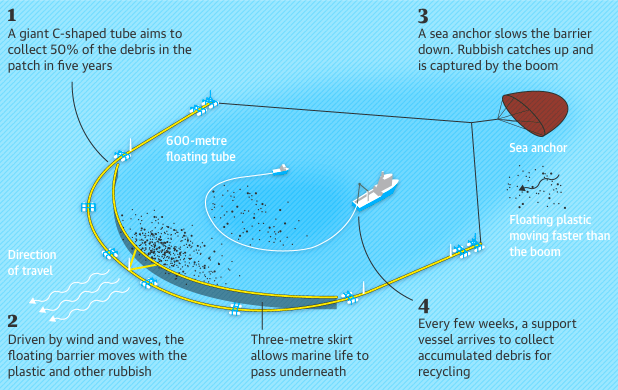 Early prototypes of the cleanup device have been unable to withstand the harsh conditions of the Pacific Ocean and fell apart after being deployed. The Ocean Cleanup’s engineers made structural modifications to the system and relaunched it off the coast of Vancouver.

This time around, the device held up, setting the stage for a broader test of the concept.

“I think in a few years’ time when we have the full-scale fleet out there, I think it should be possible to cover the operational cost of the cleanup operation using the plastic harvested,” Slat said in the announcement.