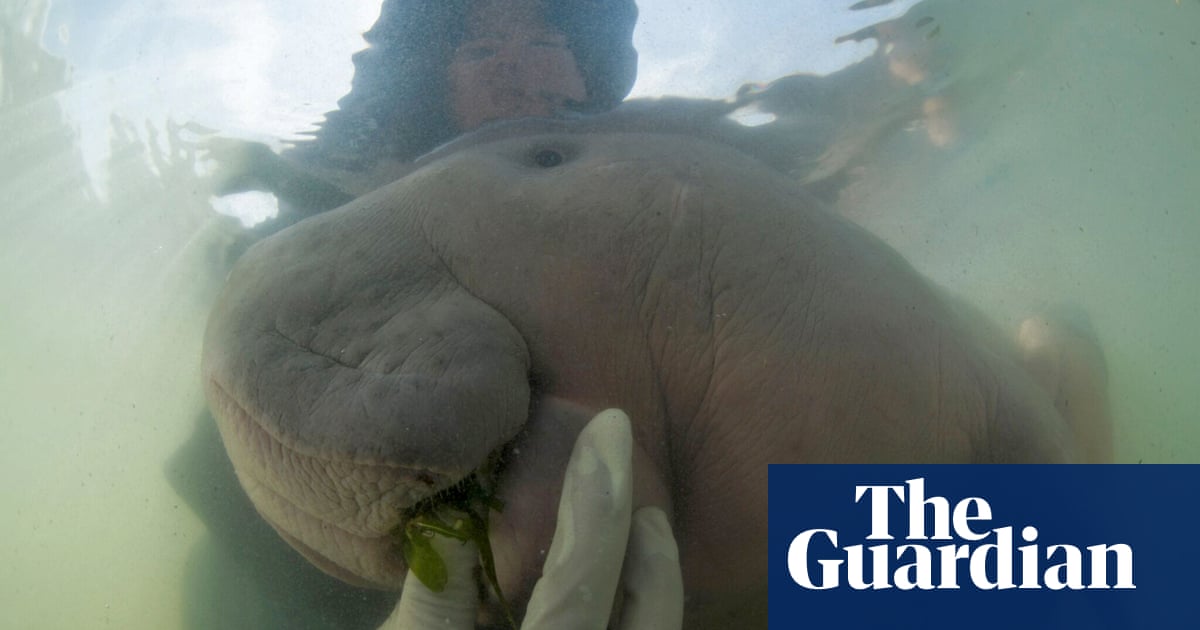 She eats sea grass, drinks milk from a rubber glove, snuggles up to passing canoes and frequently beaches herself. But these idiosyncrasies have not stopped an entire nation from falling in love with her.

Mariam is being hand-reared after she was found alone near a beach in Thailand’s southern Krabi province in April and rescued.

After photos showing the five-month-old marine creature appearing to hug her human helpers went viral online, Thailand’s Department of Marine and Coastal Resources (DMCR) dubbed her “the nation’s sweetheart”. Now she is poised to become the star of a live video feed and experts are designing a coastal holding pen to protect her from passing boats.

Around 200 dugongs, which are a species of manatee, are believed to live in Thai waters. They usually stay close to their mothers until they are 18 months’ old, but in April marine researchers found Marium swimming by herself.

After conservationists moved her to a nearby dugong habitat, Marium – whose name means “lady of the sea” in local dialect – repeatedly snuggled up to boats and canoes instead of other dugongs, leading the rescue team to deduce that she was an orphan seeking a mother figure. They began feeding her milk and sea grass.

“She’s the centre of attention. She’s a baby, she’s an orphan, she’s rare. When she’s hungry she puts her thumb in her mouth and sucks it. If she’s a little bit hungry it’s one hand [flipper], if she’s very hungry: two hands.”

Marium weighs 29.5kg and is already almost the size of an adult human but dugongs can grow to be 3 metres, weigh up to 500kg, and live for up to 70 years.

They are listed as “vulnerable” by the International Union of Conservation for Nature, signalling that they are at high risk of extinction in the wild.

Nantarika hopes that Marium will learn to live independently after a period of hand-feeding, as wild manatees have done in the past.

Nantarika says she does not think there is a risk Marium will become too attached to humans to return to the wild.

“I don’t think so, because I’ve seen experiences with manatees in the US – you can hand-raise them and still they go back to nature. We have to wean [the dugong off] humans later – right now we want her to attach to us [so they can care for her].”

Her carers are planning to build an “artificial tidal pool” to solve the problem of Marium beaching herself.

“She hasn’t learned when to go to deep water,” said Nantarika, who added that Marium will be put in the pool at night so that if the tide goes down, she will still be in water. “It’ll be like having a puppy and taking them into the home at night.”

“We had all kinds of artificial nipples – goat, cow – but she didn’t like them. We invented one using a rubber glove finger, stuffing it with gauze then running an IV tube through it. When she sucks it has a munchy feeling,” said Nantarika.

Nantarika launched an online appeal for donations to pay for Marium’s care, receiving 1.7m baht (AUS $80,000). The fundraiser was halted after two days, with the amount raised thought to be enough to cover care for one year.

Thailand bay made famous by The Beach closed indefinitely

Now Marium’s fans await the launch of a video live-stream following her every move, expected from the DMCR within weeks.

The department’s director general Jatuporn Burutpat said: “Marium is so adorable. She becomes the nation’s sweetheart and helps raise public awareness to conservation and the plight of dugongs.”

Nantarika urged cautious optimism about Marium’s future. “I hope she makes it, but I’m careful. She’s following anything that looks like a boat. That’s a great danger if she finds boats with motors.”

She said the enormous efforts required to raise the dugong were worth it. “This is representative of rare marine animals. She’s a symbol.”