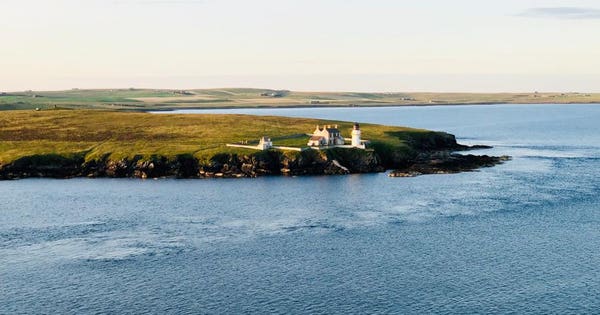 Innovation and perseverance are two of the most important qualities that Dr. Laura Watts identifies as the driving forces behind the renewable energy revolution taking place in the Orkney Islands. The Scottish archipelago is on the leading edge of the world’s energy future and as Dr. Watts explores in her recent book, Energy At The End Of The World, the projects taking place in Orkney are at the cutting-edge of technology.

See also: The Virtual Energy System Of The Future Is Coming To Life In The Orkney Isles

Many islands serve as incubators for innovation. Necessity is the mother of invention, and so many islanders have long had to make do in conditions that have pushed them to adapt. Scotland’s far north is home to some of the most extreme weather in Europe, which can also be seen as an opportunity. From the high winds to the large waves that sculpt Orkney’s coastline, the potential for renewable energy seems endless .

Situated in the stormy waters of the North Atlantic, Orkney makes a particularly compelling case study. As Watts explains: “People living on the edge need to be much more aware of their infrastructures of transport, or of energy — they can’t take everything for granted. You have to be innovative in the sense that you need to improvise.” In Orkney’s case, the islands have used their unique geographical position in the North Sea as the basis for energy generation.

The Orkney Islands have been a test site for sustainable energy generation for more than 50 years. Orkney is home to 700 micro wind turbines as well as the European Marine Energy Centre’s (EMEC) which runs some of the world’s leading research in wave energy. The islands are able to produce up to 120% of their total annual electricity needs from renewable energy, although they do sometimes rely on the mainland to fill-in on calm windless days.

The original electricity grid infrastructure was made to distribute electricity from centralized fossil fuel power stations to meet demand around Scotland. It was not designed with the expectation of islands generating their own electricity and sending it back to the mainland. Upgrading the cables so Orkney could export more excess electricity could cost millions, and it is money simply not currently available to the local community.

This is driving innovation in alternative uses for the excess electricity. One project stores electricity as hydrogen fuel which then powers some of the islands’ many ferry services. The flights that connect the many islands of Orkney will be electric-powered by 2021 and many Orcadians use electric vehicles which run much cheaper than conventional fuel sources. As Watts points out: “The energy future has arrived early in Orkney.”

See also: These Islands Are Leading The Drive For Hydrogen Energy

The energy revolution reshaping the archipelago is being mirrored on other islands worldwide . Samsø in Denmark is another leading example of island innovation — transforming itself in a carbon-negative community within just a decade and enabling islanders to shape their own energy future. In the Pacific, the isolated nation of Tokelau transitioned from a grid reliant entirely on diesel generators to solar plus storage which now provides the island with all of its daily electrical needs. A range of Caribbean islands have also embraced smart-grids and renewable energy in a bid to become more resilient and sustainable, while Europe looks to its own islands as the blueprint for a sustainable future on the mainland.

As Watts emphasises, the world stands to gain from the knowledge and innovation that is being developed on these islands at the edge of the world: “We need to work in collaboration with these islanders to figure out how they’re doing the innovation that they’re creating at the edge. How can we listen to them, how can we learn from them, so that we can then take the energy they want to give. Places like Orkney have this fantastic renewable energy resource that we all desperately need for our low-carbon future, so we need to move that we need to collaborate, we need to learn from what they’re doing.”

In Energy At The End Of The World, Watts illustrates how Orkney has been a historic source of innovation. Despite being nestled in Scotland’s far north, the archipelago has seen its share of historic events, with Neolithic settlements serving as an indication of how long islanders have called the area home — and how they have innovated all the way from the Stone Age to now being at the forefront of low-carbon technology. The history that Orkney is steeped in exemplifies how island communities worldwide have survived hardships through innovation and resilience.

Developments in science, medicine, engineering and the arts are often associated with places like Silicon Valley, Cambridge, the Sorbonne or Verona. However, islands continue to innovate, often away from the bright lights and attention of these major hubs, as Watts puts it: “When people think of future technologies or innovation, they assume it has all got to be happening in cities. But this revolution — in renewable energy — is being done in a place that lies at the very edge of the nation.”

The energy revolution is global and is not just happening in cities, with some of the biggest contributions to the renewable energy and sustainable development fields coming from islands and other remote communities. Orkney is just one of many examples of how the future of energy and sustainable development has been created by islands and, as Watts argues, we can learn a great deal from them. Islands transitioning away from fossil-fuel reliance towards pioneering the renewable energy smart grids of the future could serve as the blueprint for further developments in major cities globally.

Laura Watts will be a keynote speaker at the Virtual Island Summit.