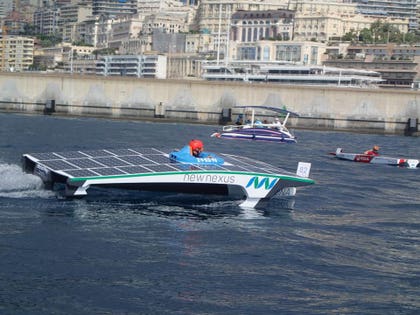 The dozens of tiny, handmade boats looked out of place among the super yachts moored at the Monaco Yacht Club. It wasn’t a mistake that the little ships were in this particular harbor at this particular time. No, these little watercraft were slipping silently between the billionaire boats to promote cleaner water transportation under the idea that our green mobility future includes common technologies between cars, bikes, airplanes and boats.

The fleet had gathered from around the world to participate in the Monaco Solar & Energy Boat Challenge. There were over 200 students representing 34 teams from 14 nations, mostly within Europe. Holland was represented by more teams than any other country, with 12. All of the boats were powered by green energy (i.e., solar, batteries or hydrogen fuel cells) and competed in one of three classes – Solar, Offshore or Energy – over five days from July 2 through 6.

The most popular category is the Solar class, which attracted 19 teams. This class allowed the teams to design their own ship, strap it full of solar panels and then participate in slalom and endurance races to see which performed the best. The eight teams participating in the Energy class were each given the same hull and had to design a durable and powerful propulsion system using whatever clean energy they choose. The Offshore class was made up of 7 teams this year, mostly by companies that are already selling their green-energy boats or are about to. The challenge was two different long-distance races (around 30 and then 60 kilometers, or 16 and 36 nautical miles, respectively) between Monaco and Ventimiglia, Italy.

The 2019 edition was the sixth annual Challenge and was organized by the International Powerboating Federation (UIM) and the Prince Albert II of Monaco Foundation. To make the teams feel at home, the exclusive Monaco Yacht Club was opened up to young people wearing board shorts and flip-flops, discussing hydrodynamics and green propulsion with the energy of friendly competition. It’s cliche to say that everyone can be a winner at an event like this, but that’s exactly what it felt like on the docks.

Take Team Indonesia as an example. As the only representatives from outside of Europe, the 14-member team faced unusual challenges as they traveled to the Mediterranean Sea. Just getting their boat to Monaco was a 15,000-plus-euro endeavor. Also, even though Indonesia has over 30,000 miles of coastline, the team is based out of the University of Indonesia, which is located south of Jakarta, many miles from the ocean. That’s why the team had to test their prototypes in an artificial lake, team member Fadhil Nuffohman told me.

The team’s problems didn’t end when the 13 members arrived in Monaco (one stayed home). The boat’s steering system had to be changed on site, and their battery management system blew up, Nuffohman said, so the students started scrambling for a replacement. They mentioned their problem to one or two other teams, and word quickly spread throughout the whole community until HEIG-VD-1, one of the two Swiss teams, heard about it and gave them an extra BMS. The distance, lack of ocean access at home and last-minute fixes meant that the complete boat wasn’t tested until the team arrived in Monaco. “It’s like Mission Impossible,” Nuffohman said.

Even so, the education that the students got during the race were not limited to the engineering questions. Team member Narendra Dipta said that one of the big lessons was to function under pressure. “We tried to work with no stress,” Dipta said. “We wanted to work more efficiently.” While the team didn’t win any actual races, it was awarded the Spirit Prize.

This sort of can-do attitude was prevalent throughout the competition. Taking a water-based approach to watercraft, the SBM Offshore E-Racing Team, located in Monaco, thinks that hydrogen fuel cell boats are the future. SBM Offshore is a company that provides floating production solutions to the offshore energy industry and had a boat in the Monaco Energy Class. SBM Offshore was also a sponsor of the event.

Caroline Epp, a hydrodynamics engineer for the SBM Offshore team, said that putting a fuel cell on a boat meant finding a compromise between protecting the fuel cell stack from water entry and overheating. The solution the team came up with in a hurry – they only started working on the boat four months ago – was a splash-proof box that wasn’t waterproof but met all of the requirements the engineers needed. Epp said it was a challenge to find the right parts for their boat, and the team’s first full boat test was the Sunday before the race began. Things worked out well for the team, which won the Innovation Prize at last Saturday’s closing night gala event.

Cleaner water mobility efforts took place outside of the competition as well. Companies like FinX and the group AA/ROK were on hand to show off their products. FinX’s tech replaces boat’s propellor with undulating membranes – basically fish-like fins – that are easy to maintain and 30 percent more efficient, a representative told me. The technology has been used in the medical field in heart pump assisting devices and FinX has been investigating using the membranes for water propulsion, under license, since 2018. AA/ROK, on the other hand, was offering rides in its solar-powered autonomous boat, the SunWave S2, which it hopes to develop into a solar-hybrid passenger shuttle.

Or take the Anvera Elab prototype, which was brought to Monaco by a team based in Italy that wanted to show off its carbon fiber, all-electric speed boat. The main focus of the concept vehicle is to remove as much weight as possible through advanced composite materials and a specially designed propellor.

The lessons learned in the races were meant to be taken far beyond the horizon. The public was invited to daily tech talks by the various teams as they described their technological challenges and successes and there was also a networking job fair set up to introduce the students to potential employers.

In the end, there were indeed actual winners in the three classes. Vita Yachts won the shorter Offshore race, but they were bested by the TU Delft Solar Boat Team in the longer challenge.  Wave Estaca won the Energy Class, and there were two winners in the solar categories. The Sunflare Solar team won the A Class Solar category while the New Nexus Solar Boat Racing Team won the Open Solar Class. At the awards gala, these teams were somewhat more happy than the rest, posing with their trophies and giant award checks against the backdrop of those huge yachts in the harbor, but I didn’t see anyone not having a good time. It just felt like the actual event winners were not the only ones who were, well, winning that night. Cliches do work.