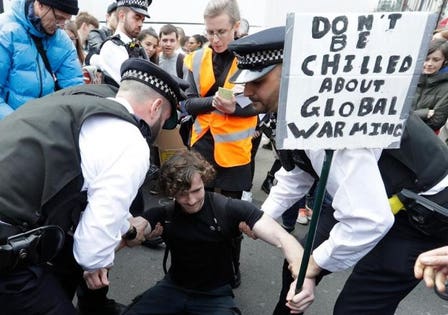 In the face of rising global emissions, intensified electrification and an increase in renewable energy could prove to make the difference that ensures we reach future climate goals. With development and energy demands soaring worldwide, there is an opportunity for clean, renewable energy to supplant fossil fuels and take over as the main form of electricity generation. New findings published by the International Renewable Energy Agency (IRENA) have emphasized the need to scale up efforts to transition away from fossil fuels and towards renewable energy.

A demonstrator is detained for sitting in the road at Oxford Circus in London, Friday, April 12, 2019. Young protestors took to the streets after a government report has revealed that the nation is set to miss its emissions targets.

The Global Energy Transformation: A Roadmap to 2050 outlines how the world can successfully implement large-scale renewable programs that will not only help reduce carbon emissions but improve global socioeconomic development. The analysis provided by IRENA shows that global energy demands are expected to double by 2050, and that 86% of global electrical needs could be met by renewable energy within that same timeframe. A large scale up from current levels, the extra energy load would be carried mostly by wind and solar installations.

Despite the optimistic outlook, IRENA warns that more needs to be done in order to reach the goal they anticipated. IRENA’s Director-General Francesco La Camera explains that, “The energy transformation is gaining momentum, but it must accelerate even faster, The UN’s 2030 Sustainable Development Agenda and the review of national climate pledges under the Paris Agreement are milestones for raising the level of ambition. Urgent action on the ground at all levels is vital, in particular unlocking the investments needed to further strengthen the momentum of this energy transformation. Speed and forward-looking leadership will be critical – the world in 2050 depends on the energy decisions we take today.”

Whilst the push for renewable energy certainly has its benefits, there remains a wide range of obstacles in the way of their large-scale development and implementation. For example, the past two years have seen the United States’ solar industry lose momentum over President Donald Trump’s tariffs, whilst lawmakers in Australia are failing to adhere to the nation’s COP21 emissions reduction goals and have continued on with their plans to open the world’s largest open-air coal mine despite widespread public condemnation. These political setbacks are relatively widespread and have been reducing the ability of the renewable energy sector to efficiently evolve and develop, and could have a lasting impact on global emissions.

A Time For Action

IRENA’s report has noted that transitions have been slow and that current rates of emission reduction are not in line with global climate goals. The report recommends that nations take more aggressive actions to ensure a quick and effective transition away from fossil fuels that will help reach the previously agreed-upon goals and ensure that mitigation of climate change remains a priority. In order to do so, IRENA advocates for stronger national policy focusing on long-term zero-carbon strategies as well as promoting innovation in the fields of renewable energy, technology and smart-grids.

Commenting on the report’s findings, La Camera said that “The race to secure a climate safe future has entered a decisive phase. Renewable energy is the most effective and readily-available solution for reversing the trend of rising CO2 emissions. A combination of renewable energy with deeper electrification can achieve 75% of the energy-related emission reduction needed.” What La Camera is describing has already happened in many places worldwide – many islands have been leading the charge in renewable energy transitions, and are becoming incubators for energy innovation.

Race Against The Clock

The benefits stemming from embracing clean, renewable energy go a lot farther than just reducing pollution and carbon emissions. IRENA has illustrated the risks of a slow transition, and every year that carbon emissions increase is another year that negatively affects the environment, social welfare, and the wider economy. Likewise, IRENA has also been quick to point out the knock-on effects of a renewable energy transition in its report, outlining how a rapid transition could save the global economy US$160 trillion in costs associated to climate change.

A chinstrap penguin walks past the Quito Glacier near Ecuador’s Pedro Vicente Maldonado Research Station on Greenwich Island, Antarctica, which conducts research, develop sscientific exploration and to documents the environmental impacts on glaciers, flora and fauna in the region.

“The shift towards renewables makes economic sense,” emphasizes La Camera, “By mid-century, the global economy would be larger, and jobs created in the energy sector would boost global employment by 0.2%. Policies to promote a just, fair and inclusive transition could maximize the benefits for different countries, regions and communities. This would also accelerate the achievement of affordable and universal energy access. The global energy transformation goes beyond a transformation of the energy sector. It is a transformation of our economies and societies.”

With time of the essence as nations grapple to reduce the current and future effects of climate change, IRENA’s report punctuates the emergency of the situation – but also how beneficial an efficient transition away from fossil fuels will be for the economy.