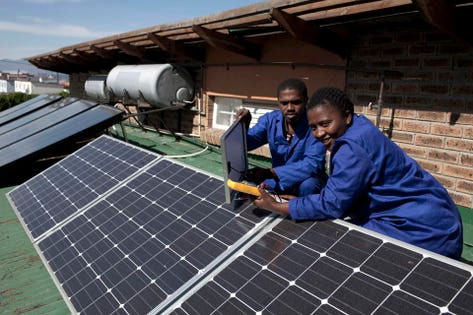 At least 500 million are living in Africa without access to electricity. The continent needs billions for clean energy projects. One idea is to form a creditworthy intermediary that supports regional market integration and that creates scale to bring down green energy prices.

One of the reasons why sub-Saharan Africa has so many without power is because the utilities there lack the ability to get loans or investment, meaning they cannot finance an expansion of infrastructure — either the transmission and distribution or the electric generators. But the AfricaGreenCo. is now an intermediary, becoming the creditworthy entity that is used to draw-in financing. Can it be effective?

“What can we offer up in this dawn of the new decade is a unique approach through public-private partnerships that can systematically develop a pipeline of projects,” says Ian de Cruz, who is the global director for the Partnering for Green Growth and the Global Goals 2030. “The projects must be sustainable, environmental and economic. This is a way that civil society, corporate investors and government can work together to achieve multiple impacts.”

Cruz spoke with this writer by phone and explained that his group — P4G for short — is the catalyst that brings together the disparate parties and that finds the financing for projects: the enterprise acts more like “angel investors” that are the first-in and that provide credibility to a given deal. It is different from the traditional approach of using multilateral or development finance institutions such as the World Bank, which provide loans and which require governments to provide guarantees. In the case of P4G, investors are at risk.

P4G is working with Africa GreenCo., which has received a $45 million guarantee from the French Development Agency that is backed by the European Fund for Sustainable Development. That provides capital protection to commercial lenders. The Development Bank of South Africa, the Rockefeller Foundation, Green Climate Fund, Industrial Development Corporation of Zambia and InfraCo Africa are also participating.

Within a dozen years, Africa GreenCo wants to build 3,000 megawatts of renewable energy generation on an investment of $5.6 billion. Its first projects will be in Zambia before starting them in South Africa, Namibia and Eswatini.

“We are bringing private sector investment to Africa that has not existed before,” says Cruz. “Utilities have challenges to be creditworthy. We are independent and have financial creditworthiness. We create a finance model through coalitions and partnerships. It is a high risk, high impact finance model. We would like to stimulate that market. We combine venture capital with growth, sustainable energy and climate goals. Our ideas can be replicated and ramped up at speed and scale.”

P4G has its sights set beyond Africa, helping to finance electric buses in Mexico City as well as Chile, Colombia and Brazil. It is also promoting energy efficiency in the steel, automotive, engineering, textile, chemical and food processing sectors.

P4G’s investment approach is promising. But it is thus far limited. Overall, $2.8 billion was spent on renewables in sub-Saharan Africa in 2018, excluding South Africa, says Bloomberg New Energy Finance. That is $600 million more than what was invested in 2017. Notably, 1,200 megawatts of rooftop solar photovoltaic energy is expected to rev up in 2021 — more than twice the amount commissioned in 2018.

Multilateral financial institutions remain a key source of finance and have helped roll out renewable energy auction programs, it adds. The World Bank’s Scaling Solar program, for example, helped finance a 400-megawatt solar rooftop deal between 2015 and 2018. That’s was 39% of the region’s total installed capacity during that period, all done for as little as $0.04 per kilowatt/hour.

And like PG4, BloombergNEF says that developing regional power markets is paramount — a move that would facilitate trade and allow countries to exchange surplus electricity across their borders. But hurdles stand in the way, namely the lack of private investment in both transmission infrastructure and small generation fleets — assets that would work to electrify the continent while providing good jobs, better medical care and food security.

“More renewables investment flowing to sub-Saharan African countries than ever before is a testament to how cheaper technology, investor familiarity and subsidy schemes are helping clean energy spread across the continent,” says BloombergNEF. “Developers having access to guarantees and hard currency lowers barriers to investment, but risk perceptions are such that access to local financing for large-scale renewables remains a distant prospect.”

Economic growth in sub-Saharan Africa is modest. But the region needs to attract investment — billions of dollars. While the World Bank and other multilateral financial institutions have been the primary source of capital, newer financing models are in the offing — much like PG4’s concept of forming partnerships among business, government and civil society. In all cases, the goal is to bring power and prosperity to the continent and to do so in a sustainable way.