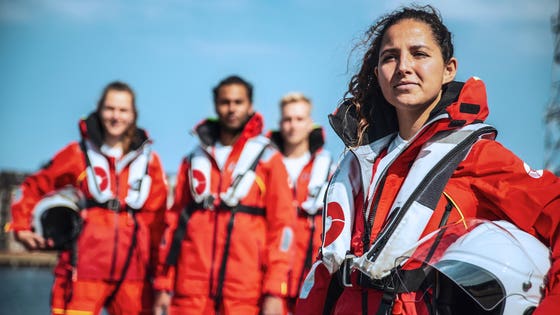 Your entire career you’ve focused on solutions where others have emphasized the problems. There’s clearly a lot of pessimism surrounding the global climate conversation. What keeps you optimistic?

I spent the better part of 20 years only talking about problems. Before starting the Sea Ranger Service– where we bring unemployed youth and navy veterans together to become a new workforce of ocean protectors–I was an activist investigating illegal fishing. But after more than two decades of awareness raising, I just did not see the concrete impact.

The reason I am hopeful today is because I think there’s still a huge opportunity to scale solutions that governments can use. Governments can set certain restrictions, but they need more practical ways to cut CO2 emissions or increase carbon sequestration. We need more solutions.

But some might argue that there are enough solutions out there. It’s just that the industries that stand to lose most from this transition are very strong politically and economically at the moment.

Of course, that is true. Radical climate action is an attack on the status quo. Businesses can’t carry on as they are. But I think it’s our responsibility to come forward with solutions that work for the whole political spectrum, including the democratically elected conservative half of the Dutch Parliament (in my case), which is less active on climate action. So when we created our Sea Ranger Service, which is essentially a huge CO2 carbon sequestration project, we made sure to design something in there for everyone. We work with veterans. We tackle unemployment and create new jobs. We are training young people for the jobs of the future. By offering a future perspective companies begin to see they can change their ways. You have to find a way that speaks to people’s intrinsic motivations. Address what’s important to them.

So what types of incentives do you think could turn big polluters like the maritime industry, oil industry or coal industry into regenerative businesses?

The maritime industry is probably the most conservative industry in the world, after mining maybe. It’s very set in its ways and yet we see everyone getting on board with renewable energy. There are big government contracts available to develop offshore wind power. Seaweed farming is also expanding. The sustainable blue economy is growing, and that’s because they’re seeing a business opportunity. Young people offer another solution. By training them to actively work in these companies in the future, they are very much pushing the industry to reduce their environmental impact.

Are you seeing other key incentives?

Yes. Government regulations. For example, with new restrictions on emissions for big seagoing ships, businesses make substantial changes to the way they do business. It is vital to ensure that as the climate movement is gaining political traction, it translates into meaningful change on the ground, for example in the industrial seaports of the world.

So then it’s a question of the rate of change:  how can we accelerate this process? What’s the role of consumer behavior in all of this?

I think there is a real role for consumers and for young people to pressure their governments, to pressure retailers but when you get to the level of, let’s say Maersk as a shipping company or Aramco as an oil company, I just don’t believe that consumer behavior or public pressure will do much. You need to come up with pilots, with new types of collaborations. You need to incentivize them with a business opportunity. Innovating in new technologies. Training a new workforce. Climate fatigue and climate anxiety also need to be addressed. There’s a younger generation of people that are very frightened about the future. It’s our responsibility to point out how they can be involved in concrete solutions.

What is the role of creating new economies and new jobs for a just transition?

The types of political divides we’re seeing in places like the UK and the US are driven in large part by a very dissatisfied working class. I think it’s important to really spend some time mending society and trying to find some form of common ground, however difficult that may be. We need to bring in the farmers, the fishermen, the miners, and retrain them to take on the jobs of the future. Social inclusion is the biggest gap the climate movement is not addressing.

For example, in the Netherlands the first training course for engineers working on offshore wind turbines is only a relatively recent development. We are now developing the first course to become a certified seaweed farmer. Between now and 2040 we foresee training 20,000 young people to join different maritime sector jobs and I think that will ultimately have an impact on the sector.

How do you manage to meet people where they are and pass on a climate message as well?

It’s the subtle messaging that actually ends up being the most powerful. If I’m in a port and I meet a maritime CEO, I will say something like “The ocean has given us so much. Right now it’s just time to give a little back.” And they go, “Yeah, we know, we know.” That literally is enough. As long as we’re not doing “green washing”, having them involved in a subtle way normalizes the need for climate action and the fact that they’re doing something about it.

How would you suggest the climate movement change its narrative then?

I think the new narrative has to be about offering future perspectives, about building bridges and very unlikely partnerships. This is actually the subject of a new book I’m writing right now. I’m exploring the importance of the lessons learned from President Roosevelt’s New Deal nearly 100 years ago to aid our challenges of today. As you may have guessed, social inclusion was the success factor.

Next Now:   For the first time in its 40 year history, Ashoka is galvanizing the strength of its community on climate action. Next Now: Planet & Climate aims to change the course of history by uniting extraordinary changemakers around audacious goals that bring people and planet to a new equilibrium. This Ashoka series sheds light on the wisdom and ideas of leaders guiding the field.

Wietse van der Werf is a social entrepreneur and a conservationist on a mission to pioneer regenerative blue economy ventures. He founded the Sea Ranger Service in 2016 to revolutionize ocean conservation. Wietse empowers unemployed youths and navy veterans to manage Marine Protected Areas. He is based in the Netherlands and was elected an Ashoka Fellow in 2018.

Corina Murafa is leading Next Now/Planet & Climate and is also the Director of Ashoka Romania. Prior to joining Ashoka, she advanced long-lasting positive change in Eastern Europe as a public policy expert on energy and sustainability. She has worked for the World Bank, OMV Petrom, Deloitte, national governments and think tanks.

Source: Ashoka – We write about finding entrepreneurial solutions to the world’s problems.