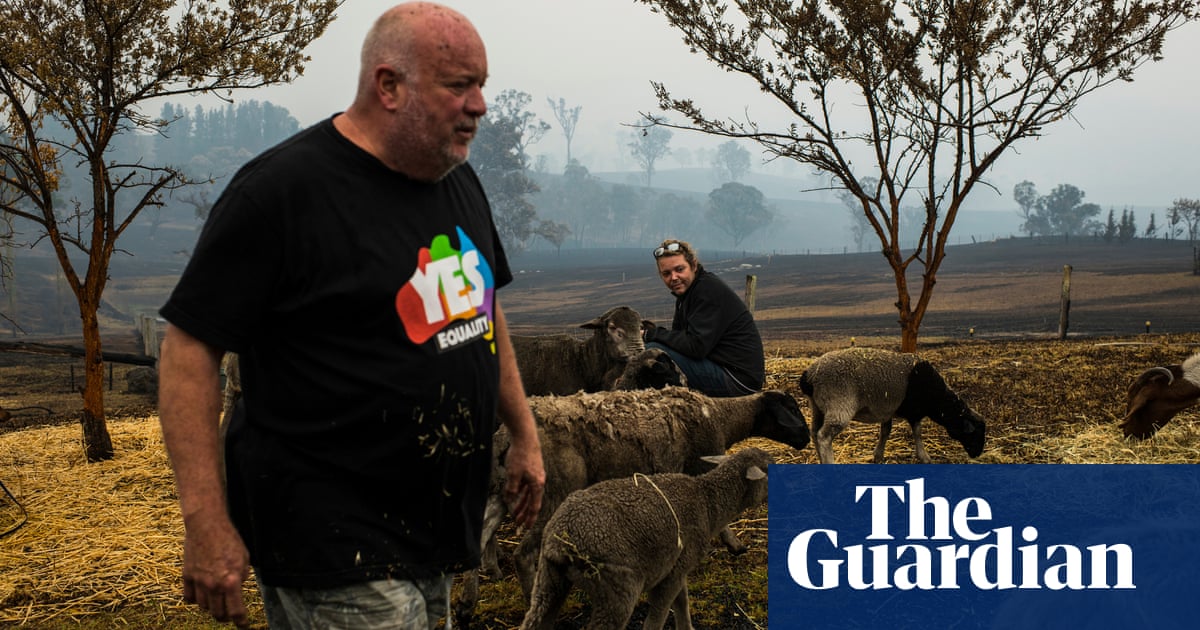 The joey rescued from his mother’s pouch after the bushfires that tore through the village of Cobargo on the south coast of New South Wales last week has no name yet, but Kyle Moser is leaning towards “Ali”.

In a room at the back of the Cobargo post office, Moser and his partner, David Wilson, are caring for the kangaroo soon to be known as Ali and two wallaby joeys. Next door is the remains of a burnt-out cafe. Across the road are the charred ruins of what used to be a leather shop, a yoga studio and an incense shop.

“We were told that the firies really fought to save the post office because they didn’t want to lose it,” Moser said. “It’s humbling, you know? Why do we deserve that?”

Moser and Wilson have not been entirely lucky. The couple moved here from Sydney four years ago to start a new life together running the post office. After the weekend’s fire, it has become their home.

On Monday, they took the Guardian to see what was left of their house in neighbouring Wandella.

While they fed the sheep, cows and goats that miraculously survived the blaze amid the rubble of what used to be their home, they explained how they watched in the early hours of New Year’s Eve morning as the fire approached their town.

“It was terrifying,” Moser said. “I never thought I’d be involved in a bushfire and never again hopefully. It was just so scary. I just packed the car. Dave did want to fight it in the beginning but we were worried about getting out. There’s only one road in here.”

With their four dogs they headed for the nearby seaside town of Bermagui, which, by 10am, was “pitch black” from smoke. The rumour mill there was in overdrive. They were told the post office had gone, that the whole town was gone.

When they returned home a few days later, they found the remains of their house.

“I was just numb,” Wilson said. “I think your body just sort of shuts down. I still don’t think we’ve really processed it yet. I’ve literally just found out that we’re covered by insurance and I just feel flat. I think I’ve been carrying around all that stress and now I’m just empty.”

The mild temperatures and wet weather that have helped firefighters in NSW come to grips with the dozens of blazes still burning out of control came too late for many places like Cobargo.

On Monday, police confirmed an eighth person had died in the south coast fires, bringing the total number of deaths in the state since the start of this bushfire season to 20. A 71-year-old man was found at his property in Nerrigundah, a tiny village about an hour north of Cobargo.

But what happens to people like Moser and Wilson after the initial crisis has passed? “That was my first thought. My initial thought was, like, ‘what’s next?’,” Moser said. “Like, what happens now? I still don’t know.”

It has been a week since father and son Robert and Patrick Salway died fighting the same fire at their home in neighbouring Coolagolite.

The blaze destroyed dozens of homes and businesses in Cobargo and the surrounding district, and the village became the subject of international focus after the Australian prime minister, Scott Morrison, was heckled during a visit.

But after the spotlight moves on to the next town in the fire’s path, life for many here has hit an impasse. The village remains without power and the local showground has become the shelter for a number of people left homeless.

It has become a place to find information, get a place to stay, and pick up supplies at a donation stall better stocked than most local general stores.

“I don’t even know where most of the donations are coming from any more,” said Jess Collins. “Things show up and are gone again before I know where they came from. Some guys from Jindabyne (about 125 miles west) dropped some stuff off before.”

Collins has been here most days since the fire hit. Though she grew up in Cobargo, she now lives about four hours north in the town of Goulburn.

She came home for Christmas to visit her father, and took shelter at the showgrounds when the hills around his home became engulfed by fire. “I’ll have to go home eventually but for now I just want to help,” she said.