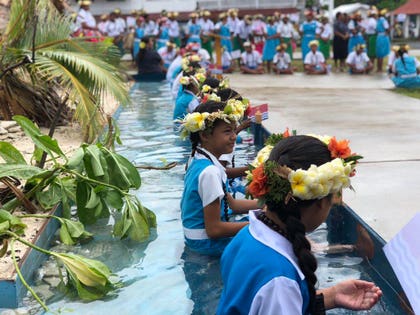 The 50th Pacific Islands Forum (PIF) opened in Tuvalu today, with leaders from across the Pacific gathering to discuss issues vital to the region’s future, and the planet as a whole.

This event has particular symbolism, being hosted in one of the world’s smallest and most climate-vulnerable nations. Tuvalu is made up of eight inhabited atolls, each lying just a few meters above sea level. Therefore, the nation is at the forefront of climate change hazards, with fears that the islands could be made uninhabitable as soon as 2030. The island capital, Funafuti, is about 20 meters wide at its narrowest point, and not much more than 400 meters at its widest.

The meeting began with an opening ceremony in Funafuti when current Forum Chair, President Baron Waqa of Nauru, handed the chair on to Tuvalu. Island leaders will then spend their time in meetings and dialogue sessions with civil society, the private sector and the various Council of Regional Organisations of the Pacific agencies.

During the summit, Australian Prime Minister Scott Morrison will face increasing pressure to act on climate change. Australia is a major emitter and is seen by many in the region as partnering with the US Trump administration to damage the legacy of the Paris Agreement. Island leaders are increasingly looking to other partners outside of the region, including China, which is making the Australian government particularly nervous.

Pacific policy expert Tess Newton Cain told The Guardian that China’s growing presence in the Pacific may mean that Australia has far less leverage than it previously did, adding: “This is the first time that I can remember that Australia hasn’t been able to play the money card, and say: ‘what if we took our aid money away? What if we didn’t pay for that?’ Fiji and Vanuatu would say ‘well do what you like, I’m off to Beijing next week’.”

With Australia’s waning influence over its Pacific Island neighbors, many are questioning the country’s place at the Forum. This year will be the first time the Fijian prime minister has attended the summit since the country was suspended in 2009. Though Fiji was invited back to the forum in 2014, Prime Minister Frank Bainimarama, has refused to attend, saying he would not join with Australia and New Zealand as part of the group, telling the Australian Broadcasting Corporation: “I don’t think they should be in the forum, they’re not Pacific Islanders.”

Newton Cain says on the issue: “From what I can see, I don’t see that Morrison has a mandate to give Pacific leaders what they say they want. It wasn’t long ago that Australia was saying they wanted to be a leader in this region. They don’t say that anymore, the question is, do they even want to be on the team, is there even a place for them on the team, not to mention the captain of the team?”

Under the previous conservative administration, Australia had an ally at the Forum in New Zealand. However, since the election of Prime Minister Jacinda Ardern in 2017 the country has made steps to reengage the Pacific and to make ambitious goals on climate, with an ambitious goal of net zero emissions by 2050. Ardern recently returned from a trip to New Zealand’s Pacific territory of Tokelau, which as an atoll nation faces the same threats as Tuvalu and its other neighbors.

“We meet not only for the people of Tuvalu, not only for our Blue Pacific family, we meet for the world,” said Prime Minister Enele Sopoaga, incoming Forum Chair, ahead of the opening, “Our work this week is about the survival of all our Pacific people, the protection of our islands and our great Ocean. We must turn commitments into action and demonstrate leadership to navigate the climate emergency by working together.”

The release of the Communique of the 50th Pacific Islands Forum on Thursday evening will mark the end of the official program of meetings, and a closing ceremony will be hosted by the Government of Tuvalu at the end of the week. On Friday, Leaders will meet with all Forum Dialogue Partners with a focus on greater global action on combatting climate change and protection our ocean, two intertwined issues that are vital for the Forum’s theme of Securing Our Future in the Pacific.

“This meeting takes place at a pivotal moment in the history of our future in the Pacific. Our people look to their leaders to see their way through national priorities, geo-politics and agendas to come together as a strong collective,” said Pacific Islands Forum Secretary-General, Dame Meg Taylor, “I wish our Leaders well for their discussions, and we thank the Prime Minister and all the people of Tuvalu for their open hearts and generous hosting of the Blue Pacific family this week.”