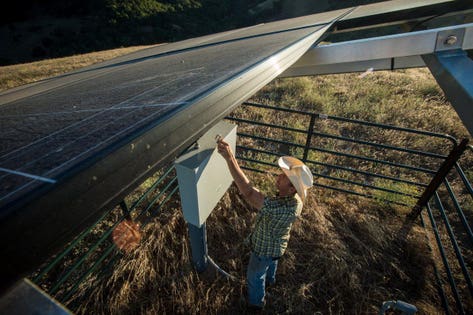 State-level 100% clean energy targets are increasingly becoming the norm across the United States thanks to fast-falling renewable energy prices and forward-looking policymakers. While states have led the way so far, federal policymakers have also proposed a 50% by 2035 national clean energy standard that could advance in 2021.

These targets represent a clean energy transition. This fundamental paradigm shift in how we build and operate our energy infrastructure offers tremendous opportunities to improve public health, limit climate disruptions, and expand our economy.

This paradigm shift, like any other, faces major barriers preventing an accelerated clean energy transformation—yet smart policy can overcome them. So what will it take for the U.S. energy system to reach ambitious clean energy targets by 2035, 2040, or 2050?

Clean energy generation and other technologies on the distribution network are often referred to as “distributed energy resources” (DERs). These DERs can produce electricity (e.g., rooftop solar panels), modulate or shift demand (e.g., batteries or smart thermostats), or efficiently use electricity in new and important ways (e.g., LEDs, heat pumps, and electric vehicles).

In addition to emitting zero pollution, the principal advantages of DERs compared to fossil fuels are that they are local (more efficient and resilient), are not land intensive (use existing infrastructure), are easily mass-produced (drives down cost), and can have more diverse ownership capital (draw investment from a wider capital pool and involve additional investors with a stake in the clean energy transition).

Clean DERs are central to reaching clean energy targets and navigating the resulting energy infrastructure paradigm shift, but their need for scale creates barriers to their deployment.

Fortunately, the barriers to deployment at scale can be overcome with incentives, improved standards, and fairer laws and regulations.

Because clean DERs must be deployed at scale to achieve the requisite economic impact, they are best sold as a standardized product. But every city, neighborhood, home, and business has different physical and transactional requirements—the opposite of standardization.

Meanwhile, simple versions of NEM are becoming less viable as solar penetration increases in early-leader states: Hawaii is limiting new systems because distribution circuits have become saturated and California has moved to mandatory time-of-use rates to encourage consumption outside the solar maximum window.

In the commercial sector, distributed solar has struggled to take off because recovering capital is more complicated while ownership structures and rooftop configurations are more diverse. For example, while the overall U.S. solar market is expected to grow in 2019, the commercial solar market is expected to shrink 13% due to less favorable rate structures and incentives.

To some extent, fast-falling battery prices may help solar deployment by allowing solar generation to be consumed whenever it is most valuable, but this is just the tip of the iceberg. Getting to net-zero buildings and low-carbon transportation means electrifying vehicles and buildings to add new charging load that soaks up larger amounts of renewable electricity, while shaping total power consumption so it can be offset by DERs and consume the cheapest utility-supplied renewable power. This means integrating energy-efficiency upgrades, adding new appliances like heat pumps and inductive stoves, and installing batteries and EV chargers, leaving citizens with a bewildering landscape of choices without many trained professionals to help navigate them.

To overcome this barrier the industry will need workforce development, new business models, and forcing functions like incentives and standards to accelerate progress.

“Soft costs” are another barrier to accelerated clean DER deployment at scale. These costs reflect the fraction of a final product sale that is neither equipment, installation, nor profit. While this big bucket encompasses other barriers, soft costs are usually dominated by red tape and customer acquisition costs.

Taking rooftop PV as an example again, former Sungevity CEO Andrew Birch laid out a damning explanation of how soft costs contributed to the expense of distributed solar systems installations in the U.S., where systems cost almost three times as much as those in Australia—almost $10,000 more for a typical five-kilowatt system. A 2014 study from Lawrence Berkeley National Lab comparing soft costs for residential solar in the U.S. and Germany estimated that customer acquisition cost differences were around $3,000, or nearly a third of the U.S.-Australia difference. These cost differences could just be due to the more fragmented U.S. market and lack of public education, but red tape also has a clear effect on customer acquisition costs.

These challenges all fall on the soft-cost spectrum, and while progress has been made in reducing them, much room remains for progress through standardization and streamlining of permits and requirements in an environment with clear policy targets for installations.

DERs have to contend with hostile incumbents on their path to scale, and these incumbents take many forms. For instance, vertically integrated electric utilities establish new rules and requirements governing new customer products, natural gas utilities use their regulatory influence to slow down the transition from domestic gas use to clean electricity, and gasoline distributors mount public campaigns or foster anti-EV legislation.

Because change is hard, corporate inertia is real, and investors have set expectations for any given corporation, hostile incumbency is a significant barrier to clean energy adoption. Fortunately, either voluntarily or under the threat of regulatory action, utilities like Xcel Energy and Green Mountain Power leaning into the transition by investing in new solutions.

Examining barriers to faster deployment of clean DERs must include the infrastructure binding them together, because DER deployment clearly impacts this infrastructure—and could benefit it. So far, the clean energy transition paradigm shift has created minimal impacts from DERs, but that will not remain the case. In the electricity sector, for example, energy efficiency and distributed generation have already reversed electricity load growth, creating flat or declining demand since 2007.

Looking forward, policymakers working to accelerate a clean energy transition must foster two key transformations: beneficial electrification and responsive demand. Beneficial electrification means converting existing uses of fossil fuels in buildings, transportation, and industry to clean energy sources like clean electricity or hydrogen. Responsive demand means that markets and grid operators supply electricity demand in real-time while providing signals to consumers to shape when, where, and how they consume power.

The old paradigm capitalized on dirty fossil fuels’ high energy density and ability to be stockpiled to meet demand. The new paradigm requires the clean energy economy to become more tightly coupled without energy stockpiles, but with both ends of supply and demand aware of how to use their flexibility or availability to maximum effect. Consider this paradigm analogous to the “just-in-time” transformation in logistics that occurred at the end of the 20th century.

Success on these two key transformations would be a significant catalyst for policymakers to accelerate the clean energy transformation. But they will also significantly affect energy infrastructure like pipelines and electric bulk power systems. Reaching ambitious clean energy targets will require smart policy considerations on both.