Why Global Citizens Should Care
Plastic pollution and waste threaten the environment and marine life, and even though community initiatives like clean-ups go a long in reducing waste, they aren’t enough to stop litter from finding its way into our oceans. This makes solutions like litter traps an important tool in the effort to stop marine plastic pollution. You can take action here to support the UN Global Goal 14 to protect life below water.

Gansbaai in South Africa’s Western Cape is a popular destination with travellers across the globe drawn in by the shark-cage diving and whale watching offered by the fishing village.

Indeed, show up in Gansbaai during the high tourist season between December and February and you’ll be in a cultural melting pot with people from around South Africa, Europe, and North America.

However, there’s a downside to the idyllic harbour town.

Gansbaai is now plagued by plastic pollution and other rubbish that’s threatening its coastline. And the litter is finding its way into the sea through stormwater drains.

Plastic pollution has rocketed into public consciousness in recent years and, as the World Wildlife Fund (WWF) says, “it’s choking our wildlife.”

The organisation estimates that 8 million tonnes of plastic are dumped into our oceans every year. 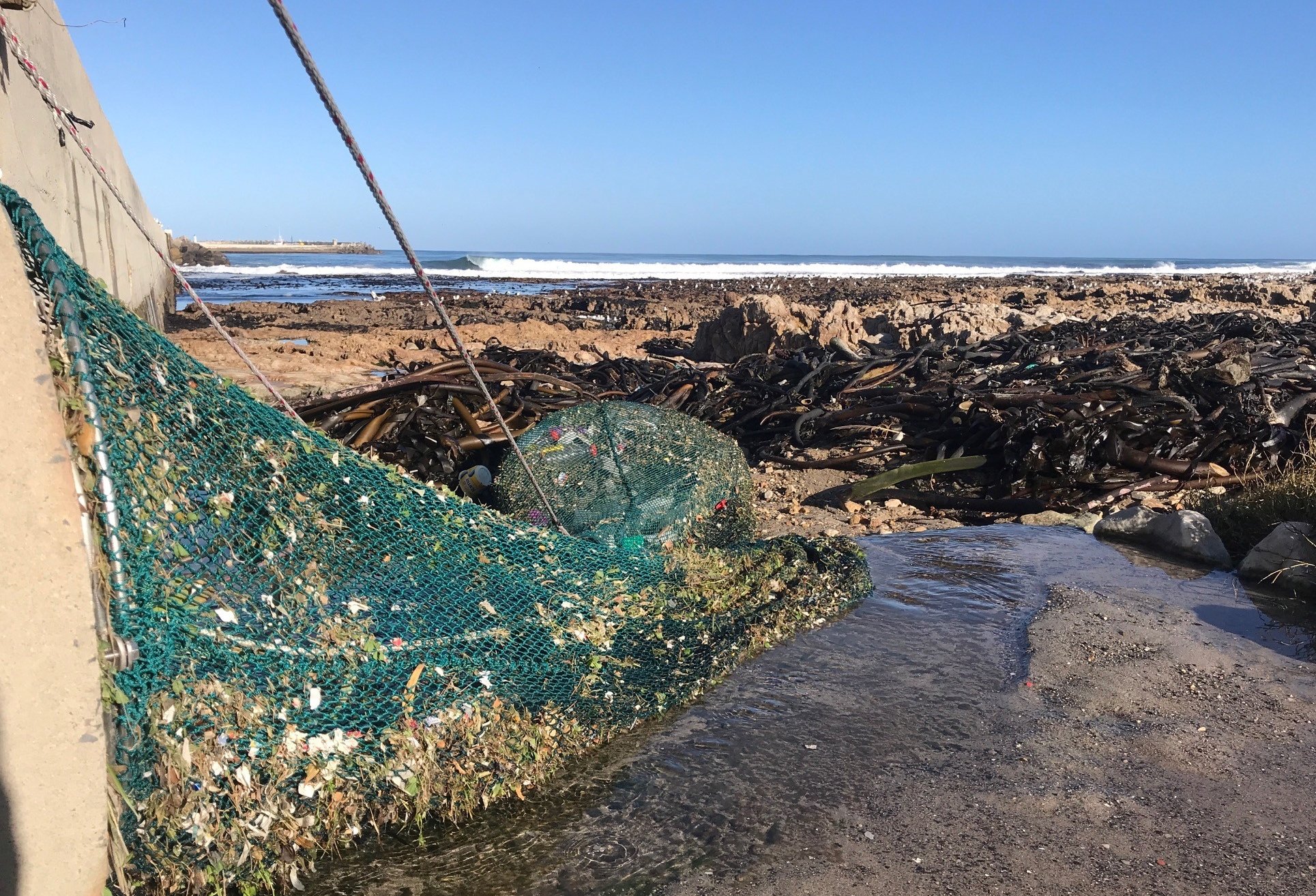 Gansbaai is now plagued by plastic pollution and other rubbish that’s threatening its coastline. Image by Hennie Otto/Marine Dynamics.

Ocean Conservancy, a movement that works to protect the world’s oceans, reports that plastic has been found in more than 60% of all seabirds and in 100% of sea turtles species, that mistake plastic for food.

Eating plastic threatens marine life, which in turn compromises the livelihoods of fishermen, with the UN Environmental Programme reporting that plastic pollution has caused a reduction in the amount of fish caught by fishermen in Kerala, in India.

Four months ago, Dyer Island Conservation Trust installed drainage nets to catch waste, and it’s already having an impact — with 370kg of litter stopped from floating into the river and ultimately the sea, an equivalent weight to 370 standard boxes of washing powder.

The nets basically work by filtering the waste out of river water before it can reach the sea.

Wildfred Chivell, founder of the Dyer Island Conservation Trust, said: “We noted the pollution from the stormwater drain in the Gansbaai harbour…The outlet leads straight to nearby rock pools and into the ocean. The kelp that traps some of the waste makes it difficult to clean and this too is ultimately washed out to sea.”

Dyer Island Conservation Trust has been doing cleanups in the area for 20 years, and Chivell estimates that 80% of the waste collected during the clean ups is plastic.

He said the Trust launched the project to protect the marine life in the area.

“Dyer Island Conservation Trust is the first port of call for marine animal rescues and strandings in the Gansbaai area and we have witnessed first-hand the impact on our marine wildlife,” he said.

At the moment, there are 63 stormwater outlets in Gansbaai, and the litter-grabbing project will be implemented in other areas around the Overstrand municipality if it’s successful.

“We hope that through this project we can minimise this impact by reducing the amount of waste entering the marine system,” Chivel added. “Unfortunately, most of the waste will probably not be suitable for recycling, but we will do this where possible.”

He said: “This is a worldwide problem and our dream is to roll this out in the Overstrand and in South Africa.”