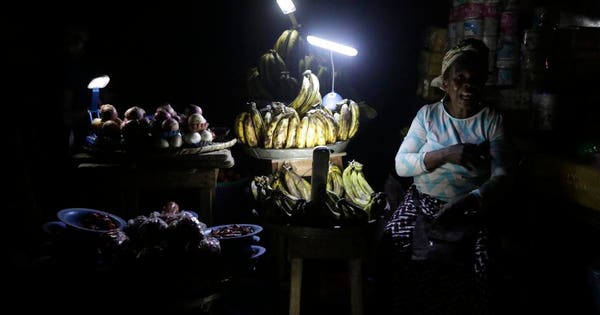 In this photo taken on Monday Feb. 20, 2017, vegetable vendors ply their wares by the light of locally-made lanterns in Lagos, Nigeria. In Nigeria, for the cost of powering a small generator for two hours, Dutch company Lumos offer enough solar power to light a house, cool a room with a fan and charge cell phones for about eight hours. For a country without a secure supply of electricity where people are dependent on candles, batteries, kerosene and fuel for generators, Lumos was surprised they spend more on power than solar options. (AP Photo/Sunday Alamba)

Things around the world are looking a little bit brighter thanks to off-grid solar technologies. They are, for example, allowing those in Nigeria and the Ivory Coast to get clean electricity for notably less than keeping a generator on hand and the monthly cost is deducted from customers’ mobile phone air times.

Africa, of course, has 600 million people without access to electricity. Nigeria has 73 million of those and the Ivory Coast has 12 million of them. And even those that have some connection to a local grid can’t get reliable electricity. To complicate matters, the population is expanding much faster than the grids, which means that many homes have relied on kerosene, generators and torches to create light. What will small, distributed solar systems mean for Africa’s emerging economies?

“At this point, we are barely scraping the surface,” says Alistair Gordon, chief executive of Lumos that is the largest provider of off-grid solar in Nigeria, in an interview with this writer. “We have 100,000 customers, who are receiving electricity for significantly cheaper than running a generator: they were paying $70 a month to fuel their generators but now they pay $15 a month for off-grid solar, which does not include the $40 start up fee.”

Lumos, he adds, is looking to supply solar power to 100 million people in the next 5-7 years. That equates to 10% of the people who currently don’t have any power in Sub-Saharan Africa. Specifically, the company will install a solar panel and the necessary cables, which encompasses a storage device, or box.

To that end, the Overseas Private Investment Corp. said in its 2018 annual report that it is committed to investing $1 billion in Africa over the next three years. To date, the lender has supported construction of 20 utility-scale power plants and off-grid renewable power projects in Ghana, Guinea, Kenya, Nigeria, Senegal, South Africa, Tanzania, Togo and Zambia.

Meantime, the Nigerian Electrification Project, implemented by the Rural Electrification Agency with support from the World Bank Group and the African Development Bank, has raised $400 million from private investors. The goal of the Electrification Project for Nigeria is to increase access to electricity services for households, public educational institutions and underserved micro, small, and medium enterprises. As such, it will focus on both stand alone solar systems and those that are connected to mini-grids.

The World Bank says that more than 700,000 solar systems have been installed in Sub-Saharan Africa. Its goal is more tempered than that of Lumos, which is to reach 56 million new customers by 2023.

“If it is a sunny day, you will put more electricity into that box,” says Lumos’ Gordon. “It recharges every day. You draw as much power as you need to. If it runs out, it runs out. But the battery will last a good period of time: two or three hours of TV, running fans, burning light bulbs and charging phones.”

Africa’s gross domestic product for 2019 is expected to be about 3.4%, says the World Bank, in its Global Economics Prospects. And expansion in some countries such as the Ivory Coast is expected to be much higher at 6%. But it’s the continent’s overall potential that has investors interested: by 2015, the total economic output is expected to be $15 trillion.

One of the key hurdles holding Africa back is investment in infrastructure which if it comes, will give a shot of adrenalin to the continent. Global businesses see potential, having already invested tens of billions: General Electric, ABB, Alstom, Siemens and Schneider Electric are among the risk takers.

In the immediate term, the lack of roads makes it hard to build out new grids, especially as the continent’s population is expected to expand by as much as 1.4 billion by 2050. The most efficient method of production and delivery is thus distributed solar power. Solar technologies, meanwhile, have fallen in price by as much as 80% over a decade while the capital markets have developed a strong appetite for such ventures.

Lower cost also means more access to financing. At the onset of the solar revolution, the traditional capital markets didn’t understand those risks and the niche financial markets were left to handle them. Today, by contrast, every major bank on Wall Street is making such loans.

“The barrier to entry is that this a very capital intensive business,” says Lumos’ Gordon. “The Overseas Private Investment Corp helps us out once we install and we roll out across a country. There is clearly a huge market in Nigeria and the Ivory Coast. We can expand that. We would like to get into Sub-Saharan Africa too.”

Off-grid solar power has the potential to brighten a lot of lives in Africa. It’s a critical step toward economic advancement. If the regulatory and financial incentives are in place, investors will flock to the continent and inject the capital and the knowledge necessary to foster a viable middle class.

THIS IS A PART OF A RECENT SERIES IN WHICH THE AUTHOR IS FOCUSING ON AFRICA. SEE ALSO:

— Africa’s Garbage Can Be Converted To Energy

— Africa Is Awash In Sunshine

— Solar Energy Could Light Up Africa

— Bill Gates: If Africa Can Be Electrified, The Whole World Will Benefit Too

— China’s One Belt, One Road Initiative in Africa