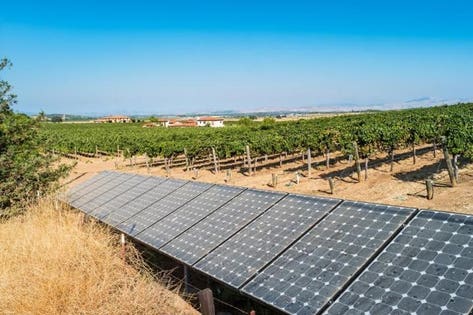 Solar panels at a vineyard in Livermore Valley, California.

When you think of companies and sectors that need to prepare for the consequences of climate change and environmental issues, the usual suspects are the likes of mining companies, oil and gas groups, electricity generators and carmakers.

Not drinks groups. But beer, wine and spirits producers are increasingly concerned with the impacts of climate change, such as higher temperatures, more extreme weather events, an increase in diseases affecting crops and access to water. It’s no surprise in many ways – beer is 95% water, after all, and despite the polish and glamour of their brands, drinks groups are entirely dependent on an agricultural supply chain that is coming under increasing pressure as the climate changes.

That’s why the brewer Heineken recently announced that it will go beyond its efforts to reduce the amount of water it uses to make beer, and to improve wastewater treatment, with a commitment to replenish all of the water that it uses in water-stressed areas.

Another drinks behemoth, Pernod Ricard, which is the world’s second-largest wine and spirits group and has 86 brands in its portfolio, from Martell cognac to Absolut vodka and Havana Club rum, has recently unveiled a new sustainability and responsibility roadmap with a range of 2030 targets to make its business more resilient and responsive to issues such as climate change and water scarcity.

Like Heineken’s water strategy, Pernod Ricard’s roadmap is explicitly linked to the United Nations’ Sustainable Development Goals. “Sustainability and responsibility are part of our roots,” said Alexandre Ricard, chairman and chief executive, at the launch of the report in Cognac, at the headquarters of its Martell brand. “Every year, we buy more than 2.6m tonnes of raw material from around the world – commodities such as sugarcane, barely and wheat. To have a successful business, we need to care for the land and take care of the soil in order to protect the quality of our products.”

The company’s strategy is focused on four key areas that go far beyond just environmental issues – nurturing terroir (the French word for the land, but it has a much wider meaning, encompassing the entire natural environment of a place), valuing people, circular making and responsible hosting.

Nurturing Terroir – every Pernod Ricard product takes its character from the land where it was grown, the company says, so the group has a duty to nurture these areas, with a particular focus on maintaining biodiversity and “responding to the challenges of climate change to ensure quality ingredients now and for generations to come”.

The company is developing ‘regenerative agriculture’ pilot projects within its vineyards in eight wine regions – Argentina, California, Cognac, Champagne, Spain, Australia, New Zealand and China – mimicking natural processes to improve the quality of top soil, watersheds and ecosystems. By 2030, Pernod Ricard aims to be working with more than 5,000 farmers to share this knowledge further.

In Cognac, for example, the company is developing new vine varieties that are disease-resistant and climate-resilient and which it plans to make available to all growers of Cognac grapes.

Circular Making – as people become increasingly aware of resource constraints, all companies need to minimize waste and preserve natural resources. “We know we are still in a linear model and mindset,” says Carine Christophe, group environmental manager. “ We’ve been making spirits in the same way for 300 years, so people think: why change? It’s difficult, but we need to rethink the model. If we don’t recycle everything that can be recycled, it ends up in the ocean.”

The company’s first focus is to use fewer materials, reduce the weight of packaging and use more recycled content. Pernod Ricard says that it will ban all promotional items made from single-use plastic and all of its packaging will be recyclable, compostable, reusable or bio-based by 2025.

In addition, by 2030 the Group will pilot five new circular ways of distributing wine & spirits and help increase recycling rates in its 10 largest markets with low recycling levels. And, like Heineken, it plans to be water-balanced in all high-risk watersheds (like India and Australia), replenishing 100% of water consumption from production sites. It also plans to reduce its carbon intensity by 50%, in line with the Science-Based Targets (SBTs) initiative.

Valuing People – the company has committed to “increase diversity and fairness for all its people and empower people across its supply chain”. By 2022, it will ensure equal pay across the business and by 2030, the top management teams will be gender-balanced.

In addition, by 2030, every employee will have received future-fit training at least every 3 years to develop new skills, with 10,000 bartenders receiving training on how to host consumers in a more sustainable way including being anti-waste and plastic-free. The company is working with Trash Tiki, an “anti-waste punk pop-up that looks at food waste in the cocktail industry”.

“We wanted to inject some fun into sustainability,” says Trash Tiki co-founder Kelsey Ramage. “Sustainability can sometimes be a boring word. We’re making it about people and parties, which makes it easier to get people on board.”

But the initiative has a serious business side to it as well, with efforts to reduce food waste. Bars have been able to cut the amount of limes they use by half, for example, by reusing the husks of limes used in cocktails to create a ‘stock’ that can also be used in cocktails.

Responsible Hosting – on top of all the sustainability issues that all large companies face, wine and spirits companies have to deal with the potential for alcohol misuse as well. So, by 2030, every Pernod Ricard affiliate will have at least one program to fight alcohol misuse. It also plans to expand its Responsible Party program, which it founded a decade ago in Europe, to reach at least 1 million young adults around the world.

Pernod Ricard is doing all this not just because it wants to be a good corporate citizen, but also because it is increasingly what customers and investors are demanding. “We know that our customers have now come to expect our brands to be responsible and respectful of the environment,” says Vanessa Wright, vice-president, Sustainability and Responsibility. “But investors are also challenging us, asking whether we’re doing enough.”

Comprehensive, strategic sustainability plans such as Pernod Ricard’s are set to become the norm, not just in the drinks industry but across the economy.