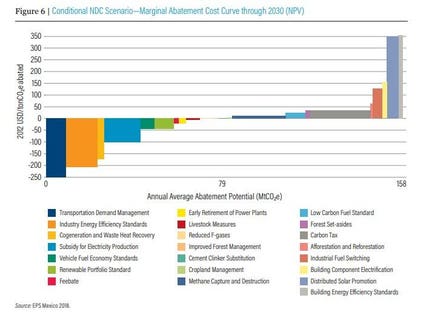 Mexico pledged to reduce its greenhouse gas (GHG) emissions by 22%-36% by 2030 as part of its National Determined Contribution (NDC) to the Paris Agreement. However, the country is already on track to miss these targets by a wide margin and has not specified any plan to achieve its emissions goals.

WRI identified 21 policies to decarbonize all sectors of Mexico’s economy, with three sectors in particular—electricity, transportation, and industry—contributing 64% of all emissions reductions. Together, the policies transform Mexico’s electricity generation, significantly expanding renewable energy and phasing out coal by 2030, add highly efficient and electrified transportation, and reduce tough-to-tackle industrial emissions.

Mexico is the world’s tenth-largest GHG emitter, and its emissions are projected to increase by more than 75% by 2050 as its economy continues to grow. Mexico’s NDC includes both an unconditional 2030 GHG target of 22% below business-as-usual (BAU) projections and another 2030 GHG target of 36% below BAU conditional on international aid. And while Mexico has no official 2050 goal, the country’s Ministry of Environment and Natural Resources has targeted a 50% decrease in GHG levels compared to 2000 by 2050. Achieving this target would mean reducing annual emissions to only 275 million metric tons (MMT) carbon dioxide equivalent (CO2e), but emissions are projected to rise to more than 1,300 MMT CO2e by 2050 under a BAU scenario.

Mexico has demonstrated climate leadership in the past. It was the first developing country to submit its NDC in the lead-up to the Paris Agreement and has stressed the importance of a cleaner economy, recognizing the global need to reduce emissions and its own vulnerability to climate change impacts. Mexico’s climate action will also have global implications—as a developing nation within the Organization for Economic Co-operation and Development (OECD), it has often established a middle ground between developing and developed countries.

But despite its ambitious goals, Mexico has not identified any clear pathways to its long-term emissions goals: Even if it achieves its 2030 NDC, it is still on track to miss its 2050 target. And while President Andrés Manuel López Obrador has pledged to cut GHG emissions, he has also promised to revitalize Mexico’s petroleum industry. Questions about the economic impacts of climate policies in Mexico have also been largely unanswered, with only a recent estimate of $136 billion in costs between 2014 and 2030.

To help Mexico identify a decarbonization pathway, WRI released Low-Cost Policy Options for Enhancing Mexico’s Climate Goals While Achieving Long-Term Social Benefits, which updates its previously recommended strategy for the country. The strategy was built using the peer-reviewed and open-source EPS, which analyzes how dozens of climate and energy policies affect GHG emissions and costs. WRI’s policy package covers all economic sectors, averaging only $12 per ton CO2e abated. These 21 policies reduce GHG emissions by 31% by 2030, with the bulk of emissions coming from just three sectors: electricity, transportation, and industry.

WRI’s analysis prioritizes an economy-wide carbon tax that steadily rises to $50 per ton by 2030 to incentivize clean energy over dirtier sources. Tax revenue would be invested in innovation and low-carbon technologies and policies, helping fund the clean energy transition.

WRI recommends a renewable portfolio standard (RPS) to further decarbonize Mexico’s economy by requiring a certain percentage of electricity generation to come from zero-emission renewable sources. Under the RPS, wind and solar will increase from very low penetrations to represent the dominant generation sources behind natural gas. A separate carve-out for distributed solar specifies that 15% of electricity demand must come from rooftop solar in buildings, increasing distributed solar photovoltaic penetration from 1 gigawatt (GW) in 2017 to more than 20 GW in 2030. The policy package accelerates coal power plant retirements, completely phasing out coal generation by 2030.

No single transportation policy is a silver bullet for the entire sector, but WRI’s mix of policies cumulatively reduces vehicle emissions 28% by 2030.

Meanwhile, three policies help make private vehicles more efficient: a feebate, which uses fees on inefficient vehicles to fund rebates for purchasers of efficient vehicles; fuel economy standards that set efficiency requirements for vehicles; and a low-carbon fuel standard, which reduces the carbon intensity of fuels. As a result, battery electric vehicles and plug-in hybrids, which were virtually non-existent in Mexico in 2017, will account for nearly 20% of the country’s light-duty vehicle passenger vehicle fleet by 2050.

Mexico’s industrial sector is its largest source of GHG emissions, and is projected to remain that way through 2050. To reduce industrial emissions, WRI suggests improving energy efficiency of industrial production and eliminating other emissions released during industrial processes, such as methane leaks from oil and gas production.

To reduce industrial fuel use, WRI’s policy package enforces energy efficiency standards for all industry subsectors. But the most impactful industry policies address super-pollutants, primarily fluorinated gases (F-gases)—refrigerants used in air conditioners and refrigerators—and methane, both of which have a far stronger impact on warming per ton emitted than CO2. The WRI policy package reduces these super-pollutant emissions with measures such as replacing potent F-gases with less harmful chemicals and plugging methane leaks in oil and gas operations.

Mexico has already committed to significant action on F-gases by ratifying the Kigali Amendment to the Montreal Protocol, an international agreement of more than 70 parties to ramp down F-gas production and consumption. WRI’s policy package envisions even further ambition, reducing both F-gases and methane emissions by the maximum identified potential by 2030.

Even with these policies, industrial emissions will still rise and dominate Mexico’s overall emissions. Because of industry’s outsized influence on the country’s total emissions, Mexico must invest in research and development (R&D) to advance clean industrial technologies. For example, technological advancements may allow some industrial equipment to be electrified rather than rely on fossil fuels. After WRI’s policy package is implemented, the largest remaining sources of industrial emissions will be from a few large industries like cement, natural gas and petroleum, and iron and steel, which can become focus areas for R&D.

WRI’s climate strategy is effective: Its policy package cuts emissions by 31% and saves more than 26,000 lives from reduced particulate emissions by 2030, putting Mexico in line with its NDC target of 22%-36% below BAU emissions.

This ambitious plan will require significant capital investment, reaching nearly $100 billion by 2030. But these policies pay for themselves in later years—ultimately generating $105 billion in savings through efficiency gains, reduced fuel costs, and co-benefits such as lower public health costs.

Mexico’s policymakers must enact strong energy policies to achieve the country’s climate goals. WRI has outlined the strongest and most cost-effective policies that could put Mexico on a path to economic prosperity, transforming how its electricity is produced, modernizing its vehicle fleet, and making its industries cleaner and more efficient.