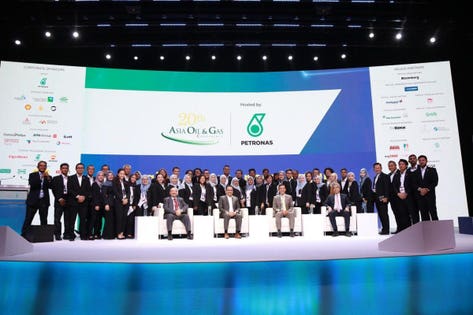 It was in 2003 that Malaysian Prime Minister Mahathir Bin Mohamad addressed the eight edition of the Asia Oil & Gas Conference, now 16 years later he is back in front of the oil and gas luminaries at AOGC20 in Kuala Lumpur. “Last time I was here it was at a period when the world witnessed geopolitical uncertainties in the Middle East and the impact of the outbreak of SARS in Asia,” he told the assembled delegates. “Brent crude oil price then was at an average of $28 per barrel.”

The effects of the war for oil

Since the time that Bin Mohamad last opened the conference, the oil price has been on a rollercoaster ride reaching heights of $145 in 2008 and $125 four years later. But it has not all been peaks, with the price slumping to $32 per barrel within six months of its all-time high in 2008, with further troughs experienced in 2014 and 2016.

“Today, 16 years later, the situation and concerns surrounding the subjects of my speech in the 8th edition are very much relevant and prevalent,” he continued. “Indeed, the Middle East is as turbulent as it was back then despite, or because of the success of the Western powers and their allies in affecting regime changes in the region and forcing the acceptance of what they defined as democracy.

“Whether we acknowledge it or not, the military expeditions of 2003 used democracy as their cause when it is widely accepted that it was merely a camouflage, a pretext to take control over the production of oil in these nations.”

It hardly seems as if the region had settled at all since those events back in 2003 and today the region faces another crisis with the ongoing US-China trade wars. “At this point in time we will not know how it will pan out, but even as it is, numerous casualties have fallen along the way, and we can expect more to fall if it persists,” Bin Mohamad added. “In the Gulf, games of provocation create more uncertainties. These have increased the stress on doing business, and surely, the oil and gas industry is and will be affected.”

Searching for a sustainable future

Today the global community faces increased concerns over the sustainability of global economic growth with an ever-growing series of challanges both political and financial. That said, the world is experiencing improvements across the board of measurable criteria such as improved life expectancy, increasing literacy, and enhanced livelihoods.

According to Bin Mohamad, these factors will deliver predictable consequences. “Thirty years ago, there were 5.2 billion people in the world. Today, the global population has grown to approximately 7.5 billion people and is set to surpass a projected 9.8 billion by 2050, according to the World Bank, and the United Nations reports. And 70 percent of the population will be concentrated in Asia and Africa.”

He points to the facts that emerging economies such as China, India, and Southeast Asia will require energy to fuel their growth. “More countries are pursuing prosperity and a better quality of life,” he adds. “As a result, energy companies must adjust their strategies and practices to navigate the policies and regulations adopted by countries that are aligned, for example, to the United Nations’ (UN) Sustainable Development Goals framework and the Paris Agreement on emissions target.

“Having said all this, Asia, however, continues to position itself as a dynamic and vibrant market despite facing common challenges in the rising demand for energy, expanding energy access and meeting climate commitments.”

A plan for the nation

Bin Mohamad explained that for the region to continue its upwards growth the governments will need to focus on improving both the cost and efficiency of their energy, and a crucial factor here is the diversification of the energy mix. The predictions from the likes of the International Energy Agency (IEA) is that the demand for fossil fuels will remain steady. Asia is pressing ahead with the use of natural gas, considered to be a less carbon-intensive fossil fuel. Also, renewable energy is seen to have doubled in the region in five years with China and India leading the pace.

“We must, therefore, recognize the potential of our neighbors to forge strategic alliances on the back of a Prosper-Thy-Neighbour policy that promotes the concept of shared prosperity,” he said. “Only then can we forge a new energy future that is sustainable and secure for generations to come.

“With the rapid development and market dynamics of the energy industry, governments’ role in nurturing an ecosystem conducive for the implementation of sustainable energy has never been more crucial. For Malaysia, I am pleased to state that we have made great progress in our commitment to achieve the United Nations Sustainable Development Goals (SDG).”

According to the UN SDG report, Malaysia is on track to meet the target for Sustainable Development Goals number 7 – Affordable and Clean Energy. The omens are good for the region, but as with many of the economies around the world, the ultimate success may well depend on factors outside their control, most notable 9,500 miles away in Washington DC.