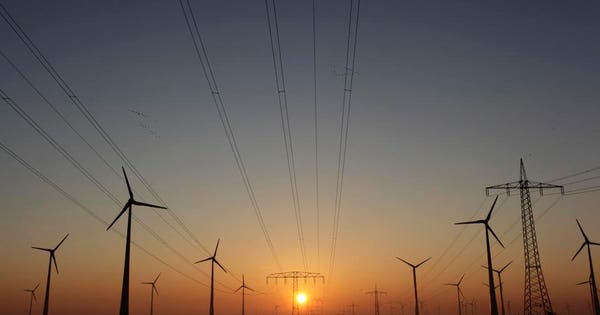 Half the world’s electricity will be sourced from wind, solar and batteries by 2050, according to research from BloombergNEF (BNEF).

The firm’s latest New Energy Outlook puts this investment opportunity at $13.3 trillion dollars with wind and solar taking $5.3 trillion and $4.2 trillion respectively. The key driver for this is the falling cost of the electricity produced from these sources, the levelized cost of energy (LCOE). In two-thirds of the world both wind and solar are now the cheapest options for adding new power capacity.

The impact on traditional fossil fuel sources is marked. Coal’s share of the global mix will plummet from 37% to 12% and oil-fired power plants being effectively eliminated. The combined contribution of wind and solar is forecast to jump from 7% to 48%.

Adding all this wind and solar, and its variable, weather-dependent, output will require huge investments in battery additions, $840 billion to be precise. That energy storage will stabilize the grid and realign peaks in demand with peaks in generation.

“Our power system analysis reinforces a key message from previous New Energy Outlooks – that solar photovoltaic modules, wind turbines and lithium-ion batteries are set to continue on aggressive cost reduction curves, of 28%, 14% and 18% respectively for every doubling in global installed capacity,” said Matthias Kimmel, NEO 2019 lead analyst. “By 2030, the energy generated or stored and dispatched by these three technologies will undercut electricity generated by existing coal and gas plants almost everywhere,” he added.

As the heat and transport sectors electrify and access to, and a thirst for, electricity grows in emerging economies, global demand for power will soar by 62%.

While renewable energy’s growth so far has been seeded by direct subsidies, investment tax credits and certificate schemes, BNEF views regulation as the more important focus for governments now.

“The days when direct supports such as feed-in tariffs are needed are coming to an end,” said Elena Giannakopoulou, head of energy economics, BNEF. “Still, to achieve this level of transition and de-carbonization, other policy changes will be required – namely, the reforming of power markets to ensure wind, solar, and batteries are remunerated properly for their contributions to the grid,” said Giannakopoulou.

She added that while the NEO is policy-agnostic “it does assume that markets operate rationally and fairly to allow lowest-cost providers to win”. As many veterans of the renewables sector would observe, that could be a bold assumption.

The U.K. currently has a moratorium on onshore wind.