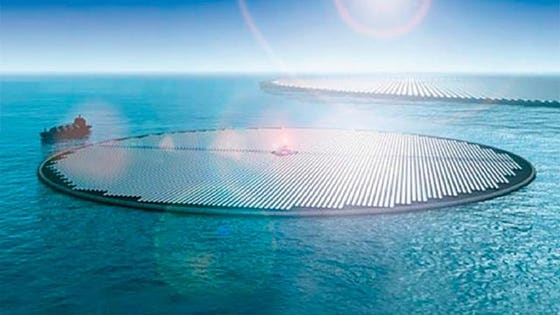 Millions of floating islands, clustered together, that convert carbon dioxide to methanol fuel could help reduce the amount of green house gases in the atmosphere, according to researchers from Norway and Switzerland.

The team has put forward a proposal for “solar methanol islands” in a paper published in the Proceedings of the National Academy of Sciences journal, PNAS.

Within the article, they agree that a massive reduction in carbon dioxide emissions from fossil fuel burning is required to limit the extent of global warming. However, carbon-based liquid fuels will continue to be important energy storage media in the foreseeable future. They propose a combination of largely existing technologies to use solar energy to recycle atmospheric carbon dioxide into a liquid fuel.

In the paper, the researchers suggest floating islands similar to large-scale floating fish farms. They would use photovoltaic cells that could convert solar energy into electricity. This would then power hydrogen production and carbon dioxide extraction from seawater. The gasses produced would then be reacted to form methanol that can be reused as a fuel.

Study author Andreas Borgschulte told Newsweek that one of the main problems with renewable energy is making it competitive with fossil fuels on a large scale. Several concepts have been put forward to try to make renewables a realistic option, but nothing has yet found its way to fruition. He said the idea for the solar islands came when the Norwegian researchers were asked by the government to push fish farms out to open sea. These grids however, needed their own energy. “Energy ‘producing’ islands had been proposed some time ago,” he said. “What remained was to include energy storage.”

Facilities could be placed in areas that satisfied the physical conditions: where wave height was less than seven meters, where there is a low probability for hurricanes and the water depth is less than 600 meters, so the islands can be moored properly. Locations for facilities were found across the globe, with the coasts of Southeast Asia, north Australia and the Arabian Gulf particularly suitable. The team says 70 of these artificial islands would make up a single facility covering an area of approximately one kilometer square, or 0.4 square miles.

The team estimates that the output from 3.2 million floating islands would exceed the total global emissions from fossil fuels. However, production is still some way off and the team acknowledges that the proposal is “ambitious.” At the moment, they are working to develop prototypes of the floating islands.

“[The] biggest challenge is the development of a large scale device to extract CO2 from seawater,” Borgschulte told Newsweek. “This process is the only one of the total system [that] has not yet been fully developed. All others exist already on an industrial scale.”

Henry Snaith, Professor of Physics at Oxford University, who was not involved in the research, told Forbes, “I don’t think the idea is totally bonkers, but I also don’t think it’s the world saving concept its bid to be.”

The Floating solar farms aren’t a new idea, but the challenge is making this floating deployment as cost competitive as rigid deployments. At present – location dependent obviously – land cost still only remain a small fraction of the total deployed PV (photovoltaic) cost. Only this week, the Dubai Electricity and Water Authority announced it was thinking about developing floating renewable energy plants in the Persian Gulf and launched a search for consultants who can advise it on the idea.

“PV is cheap today though, so the statement that alternatives can’t compete with fossil fuels is entirely incorrect,” Snaith said. “In fact, from now on, more new generation capacity [generators] will be [from] renewables – primarily wind and solar – than traditional thermal power stations.

“The other components needed for the idea, are extracting CO2 from sea water and then turning this into fuel. This part would be very energy intensive and costly. Work on creating fuels from electricity – as opposed to directly from sunlight – are massively important. This will ultimately enable solar and wind to produce 100% of our power needs and should be encouraged.

“I will just emphasize that producing electricity from PV is cheap and will get much cheaper over the next decade. Hence, aside from battery storage, we now need to create technologies or industrial trends that can either use this power when it’s produced in surplus to offset demand when it is not, or convert this electricity into other useful fuels. We don’t need to float our solar farms.”