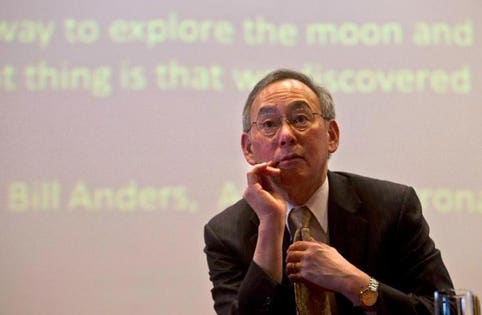 Steven Chu, former U.S. Secretary of Energy, 1997 Nobel Prize winner in physics, and the new president of the American Association for the Advancement of Science. (AP Photo/Tsering Topgyal)

Former Energy Sec. Steven Chu told a roomful of scientists in Chicago they should think now what they could do with renewable electricity that costs only 1.5¢ per kilowatt hour.

And, he suggested, those thoughts should include hydrogen.

“The cost of renewable energy at the best sites is 2¢ per kilowatt hour. And that is going to widen,” Chu said at the University of Chicago in March. “I’m an advisor to Royal Dutch Shell. They think within a couple decades the very best sites will go to 1.5¢ per kilowatt hour cost of electricity.

“Okay what do you want to think about, knowing that this will likely happen? Which is a good way to position yourself as a graduate student and a post-doc and a researcher. What research do I want to do, anticipating this will happen? Don’t wait for it to happen.”

Chu won the 1997 Nobel Prize in Physics, led the Energy Dept. for the first Obama term, and recently became president of the American Association for the Advancement of Science His lunchtime lecture at Chicago’s Knapp Center for Biological Discovery was so popular that the auditorium’s 125 seats were full, and students and scientists crowded in the aisles, peering around walls, or listening from behind them. More were turned away.

Chu told the ones who got in that when electricity falls below 4¢/kWh it can produce hydrogen that competes with hydrogen from natural gas. Hydrogen can be used as a fuel for vehicles or as a long-term energy-storage medium.

“Hydrogen is pretty good,” Chu said, “because you can store it in underground caverns and things like that, and the overhead compared to a battery is very compelling.”

But hydrogen produced from natural gas has a big carbon footprint—8.62 tons of carbon dioxide for each ton of produced hydrogen, according to the National Renewable Energy Laboratory. Hydrogen from electrolysis can be much cleaner, if the electricity is from renewables.

“So it may be that we’ll move to a partial hydrogen economy based on renewable energy,” Chu said in an appearance hosted by the Energy Policy Institute of Chicago (for whom I sometimes host podcasts) and the Institute for Molecular Engineering.

But there are obstacles other than cost to efficient production of hydrogen through electrolysis, including the tendency of bubbles of hydrogen to interfere with electrolysis itself. Chu believes science is close to overcoming that problem.

“These are some of the things I think people should think about,” he said, “because we’re already in a fundamental energy transition.”

This is the first in a series of four stories about Steven Chu’s views of climate change and its potential solutions. Read more tomorrow…