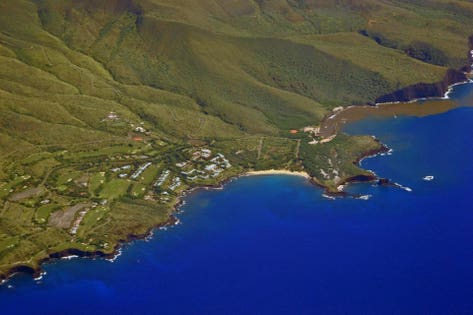 Oracle founder and billionaire Larry Ellison already owns about 98% of Lanai, a small Hawaiian island with approximately 3,000 residents nine miles from and politically part of Maui. Two weeks ago, the island announced that it had entered into discussions with Hawaiian Electric Co., a company owned by Mr. Ellison, to sell to his company the island’s power plant and energy grid.

There were two reasons given for the potential sale. The first was to find a way to decrease the island’s electricity costs. Lanai residents already pay higher bills on average than the rest of Hawaii’s residents. The second, according to a statement from the company, was to speed the transition from oil-based power to 100% renewable energy.

The two reasons are not necessarily complementary. It is possible that the statement about renewables by Hawaiian Electric was designed mostly to smooth the way for what otherwise could be seen as a controversial privatization of a public utility. If true, however, the renewable aspect of this endeavor would be both fascinating and very important for the overall “greening” of our electrical infrastructure in the rest of the country.

For all the talk about a shift to renewable energy, the concept still remains more an aspirational than a fully achievable goal because, given current technical limitations, there really is no such thing as truly “renewable” energy – at least at the present time. In fact, given the current state of technology needed to store and transmit energy obtained from wind, solar, and other “renewable” sources, any attempt to rely on such approaches for energy production necessarily requires the use of techniques and products that are based on non-renewable sources – such as the lithium in lithium ion batteries. In fact, even producing the solar panels or constructing the wind turbines themselves require using some non-renewable elements during the manufacturing process, so with our current scientific knowledge the concept of 100% renewable energy is a fallacy. Moving in that direction, however, certainly is an admirable goal.

Lanai is the sixth largest island of the Hawaiian chain, encompassing 140 square miles (approximately 363 square kilometers). Most of the population lives in Lanai City, a small collection of buildings in the center of the island. Lanai City itself is only about 3.6 square miles. There are other little towns around the island, but the distances are short and the population is small.

As with all of the Hawaiian islands, sun is plentiful, with little temperature variation throughout the year. Being near Maui, trade winds also blow about 80% of the year, most consistently in the summer months of April to October. And Lanai’s location as an island also makes it accessible to ocean waves. Initially, therefore, Lanai would seem to be the perfect place to test out various theories and approaches to creating, storing and transmitting renewable energy.

What would be the energy mix? Solar, wind, ocean wave, and possibly traditional hydroelectric power from damming all seem possible, but all come with certain costs. For example, where would the solar panels, wind turbines, and ocean wave stations be located? Given that Lanai’s main attraction is tourism, filling up the island and covering the natural scenery with acres of obtrusive solar panels and wind turbines, not to mention ocean wave facilities that would compete with tourists for beach, boating and surfing access, might be problematic. And to the extent there could be opportunity to construct dams to hold water for more traditional hydroelectric facilities on Lanai, it is logical to expect local and tourist opposition to anything that might detract from the scenery and innate beauty of the island. In fact, proponents of offshore solar and wind like to talk about how the panels and turbines can become part of the scenery, but it will be very instructive to see what Mr. Ellison’s plans would be for locating them and the reaction of both the residents and potential tourists to their placement in this real world setting.

Of course, the power grid would also have to be constructed, or more precisely reconstructed, to accept energy transmission created by many likely separate sources of solar panels, wind turbines, ocean wave facilities, and the like. How much of the current grid could be used in an all-renewable scheme? What would the cost be of constructing the remainder of the grid, and would it also require large amounts of construction on the island?

Further, how would the power be stored for the evenings when the sun doesn’t shine, the times when the winds go calm, and the periods when tidal shifts reduce the power of ocean waves? If the plan is for battery storage, what size batteries would be needed, where could they be placed, what non-renewable elements would be used, and how would the overall system work? Indeed, just the placement of batteries could be a significant issue in a place like Lanai, because the sheer number and size of them that would be required to assure consistent electrical delivery might wind up having to mar some of the beautiful scenery for which Lanai is rightly famous.

Also, would backup power provided by fossil fuels like oil or natural gas still be required if there are times that no power can be generated by other means? If so, would two redundant power grids be needed, or could they share the same lines and infrastructure and, if so, exactly how?

Finally, what would all of this mean for power costs? One of the goals of privatization, of course, would be to reduce energy costs. But would this actually happen when all of the hidden and extra costs eventually have to be taken into account?

Lanai is not Seattle, which is cloudy over 200 days of the year. It is not Syracuse, which averages over 100 inches of snow each year. It also is not Minneapolis, whose average high temperature during January is only 22 degrees Fahrenheit.  Given its small population and tiny physical size, as well as its mild climate and abundant sun, wind, ocean and other potential renewable sources, Lanai would seem to be the perfect place to test out theories about having renewable energy actually power our economy. Mr. Ellison, of course, also has the funds needed to pay whatever cost may be required. If he goes through with it, and if we actually get to see what the attempt would look like, we could evaluate its benefits, burdens, and future problems and issues – both anticipated and unanticipated. In that way, we might actually move the bar forward in thinking about powering our planet via renewable sources instead of just spending endless hours talking about it. But it is clear that many obstacles probably still remain to making renewable energy a truly practical and useful replacement for our reliance on mainly fossil fuels for our energy needs.